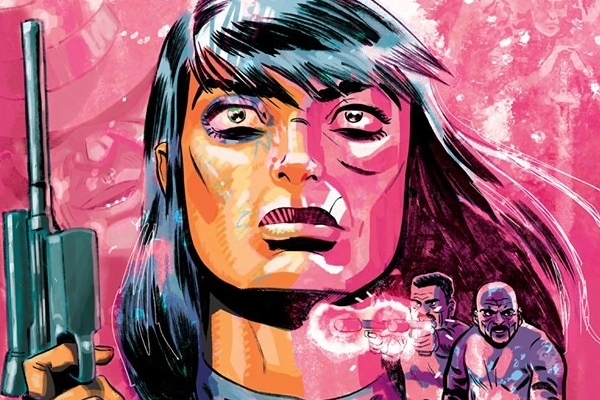 Written by George Lennox and illustrated by Russell Mark Olson, we caught up with the pair to discover the working process behind Lady Hollywood.

A Place To Hang Your Cape: How has the comic progressed since #1?

George Lennox: It’s been a pretty awesome year, as Lady Hollywood #1 won Best UK Writer and Best UK Artist at Edinburgh Comic Con’s Yancy Street Comic Awards. This year, I’ve also attended twenty-eight comic events, so I have been mega busy. Lady Hollywood #2 was also a 44-page comic so I just felt it wouldn’t have been fair for me to do a Kickstarter campaign whilst attending so many events and that’s why I waited until the end of the year. Russell, as always, has been a total pro and, with the extra pages, that’s really helped us move the story along. This issue is like two comics, but I couldn’t have split them into separate issues as it’s so fast-paced with plenty of action.

Russell Mark Olson: Visually, I feel like we’ve come closer to solidifying the storytelling style of Kate’s Los Angeles. The colour palette is honing in on the overall feel of the world. Narratively, we’re riding the line between detective story and superhero origin. The first one fits pretty squarely in the pulpy-detective genre, but we’re now starting to play around with other themes.

AP2HYC: What does Lady Hollywood bring to Cult Empire’s slate of comics?

Lennox: With Cult Empire Comics, I always wanted to create alternative comics, giving us fresh new titles and characters each year. Lady Hollywood gives CEC our very own crime fighter and it’s a title I feel can grow each year. Writing each issue, I personally feel excited as I love the world and the characters, plus there’s plenty more twists and turns to come.

AP2HYC: How do the two of you work together on the comic, and has that relationship changed between #1 and #2, at all?

Lennox: Personally, I feel as soon as I approached Russell about Lady Hollywood we both had a mutual respect for each other and seemed to be on the same wavelength. Over the last two years I have really enjoyed working with Russell as he’s really turned Lady Hollywood into the comic I’d always hoped it would be. Sometimes, making comics can add a strain on relationships between writers and artists but Russell and I seem to enjoy feeding off each other’s work. Every time I see a new page it inspires me to keep writing more issues. It’s also worth mentioning that Eli Winter plays a big part in our team as an editor we respect and trust, so she also plays a big part in strengthening the whole team’s relationship.

Olson: Most of it is back-and-forthing on Messenger, but every couple of months we manage a phone call. I get the script, and then start to create page layouts. I try to keep George in the loop as much as I can while I’m crafting the pages so that we’re both in lockstep as the book progresses. It’s never fun to have to make a bunch of changes after the fact, so I always err on the side of overshare (or at least try to). As far as changing goes, not too much. I suppose we’re getting to know each other’s preferences a bit better.

Olson: Possibly in the type of “camera angles” I use, but I feel that the character designs exist solely for the Lady Hollywood universe. Gateway is all ink-soaked paper, while Lady Hollywood is gloss gloss gloss. I suppose an outside eye might be better suited to spot the similarities, but I’ve tried very hard to make it its own thing.

Lennox: Russell has a beautiful style that pretty much stands out the minute you see it. It looks classic but it has a modern twist to it which I felt was an essential for Lady Hollywood. Gateway City is a beautiful book but you can definitely see the difference between the two worlds in each comic. 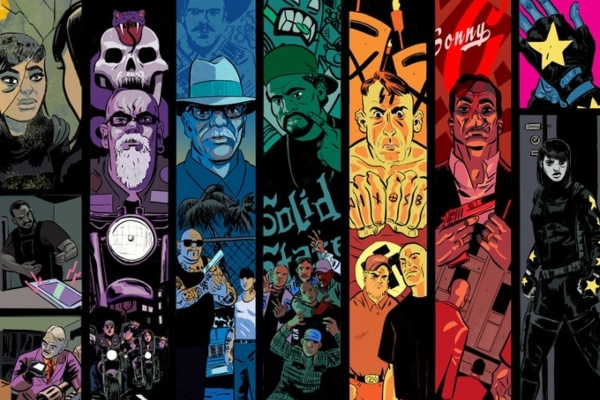 AP2HYC: I spy a lot of emphasis on colour in Lady Hollywood, it almost looks like you’re giving it a technicolour noir approach. Would you agree or disagree?

Lennox: Yeah, at the beginning we discussed about the visuals and colours for the comic as I always wanted it to feel and look like Los Angeles. When day turns to night, L.A. becomes a totally different place (and in some areas, a quite frightening place). I was inspired by movie directors like Michael Mann and Nicolas Winding Refn, as they seem to capture both of these elements in each if their Los Angeles movies. The colours at night capture the eerie mood of some blocks and you feel the danger in the heat. My own experience in Los Angeles we can see from even the homeless characters in Issue #2. The great thing about Russell was that he had a similar appreciation of the colours and has really captured the look I originally had in mind, but I must also give a big shout out to Emily Olson who flattens the colours – both of them together have produced lovely pallette.

Olson: I’d agree completely. We’re in LA. Hot, arid colors for day, neons and sparkle for the nighttime. Lady Hollywood two ventures into the seedier side of LA a bit, and we do get a new palette to play off of the other two. I see color as a kind of soundtrack for the book. The emotional energy of scenes have, I hope, very recognizable beats. I also feel that Lady Hollywood is a psychological story, a world with a lot of cracks in it. I’ve tried to amplify the nervousness, angst, and anger using color, line, and texture.

AP2HYC: George – you mention how a key component of Lady Hollywood’s genesis was creating a comic that had a strong female protagonist – in this male-dominant action-world, how important was injecting a female lead into your work?

Lennox: Yeah, I’m really proud of Lady Hollywood. Growing up I remember loving actors such as Meiko Kaji, Sigourney Weaver, Linda Hamilton, and Pam Grier. Even comic book-wise, I loved Miss Fury and Black Orchid but I felt that, for Lady Hollywood, I wanted to create a character who is a fairly ordinary woman trying to survive – someone people could relate to. To survive in the streets of L.A. Kate has to go down a path she seems to have chosen herself – only we, the readers, see that it is Mr. Fabulous who is setting the stage. Let’s be honest, most males don’t look at the world from a female perspective so I find it interesting to hook people into this world then to try tell Kate’s side of the story; although, with the first two issues, we are simply setting the stage – it’s not until Issue #3 that this plays out.

Lennox: Well, I have just finished our script for Lady Hollywood #3, where we focus on the background stories for some of the other characters. We also find out more about Kate’s background and we learn how she became a badass killer.

Olson: I think we’ll continue to play around with that synthesis of detective/vigilante story. Kate is building a proper little rogue’s gallery and there are a lot of people she’s pissed off, even if she isn’t always aware of what she’s done. There’s also all of Cult Empire’s back catalogue which could ooze into the world. But the hits will get harder and the stakes higher.

Will you be backing Lady Hollywood on Kickstarter? Let us know in the comments section or send us a Tweet!