Divided Kingdom wears its fiercely political heart on its sleeve. Its first issue goes to great lengths in establishing a dystopian Britain and the leftovers of humanity forced to work under an iron regime. It’s disheartening then that between this and its second issue, Divided Kingdom quickly descends into a bloodbath of violence at the expense of hooking the reader into its wartorn world. Where #1 provides a subdued beginning for Divided Kingdom, #2 pummels such concepts as story and character into submissions as a crushing sense of hyper-violence commands the issue.

Co-written by Andy Hamilton and Bill Clark, with art provided by Adam Oehlers in #1 before MJ Hiblen takes the illustrative reigns for #2, what stretches the two issues further apart is the hugely different art styles at play, and how they oddly compliment the moods in each issue. Oehlers’ visuals in #1 are in monochrome, and densely packed with shadows. It’s a decent match for the sombre vibes at play in #1, which sees BritCorp employee Dan caught up in a sadistic experiment that grants him supernatural capabilities. It’s a hook-laden affair, story-wise, but scuppering things is the unfocused nature on these characters itself. #1 initially opens with a completely different character that feels like we’re meant to believe is the protagonist, before shifting to Dan without warning. It’s an uneven move that results in page space being squandered on characters that don’t impact upon the story. 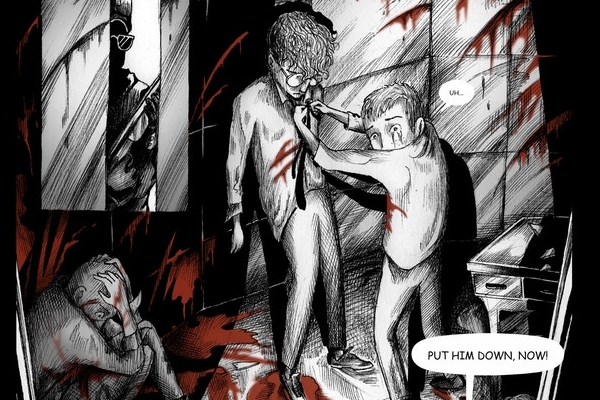 Following on from this, #2 pits Dan’s desperate escape from BritCorp’s clutches via a rebel leader. However, #2 rises to become little more than a colossal action set piece as Dan’s escape is fraught with peril from separate rebel fighters. Hiblen’s art leaps from one extreme to the next, as blood and guts proceed to fly in Dan’s face from all sides. It’s all drawn with exhuberant levels of exagerration, and yet it amounts to little. The story ultimately fails to move forward at the speed which it feels like it should. 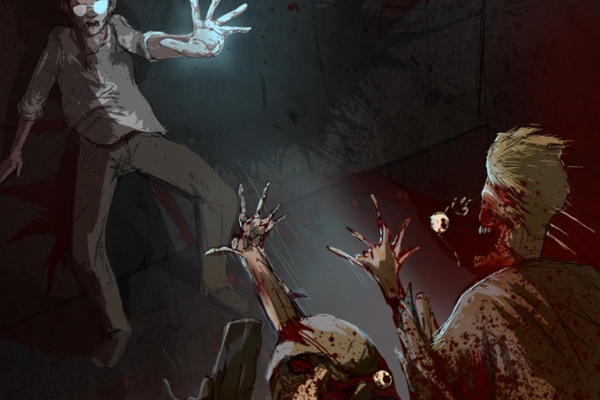 This is an unnecessarily bumpy start for Divided Kingdom. The core problem within these first two issues is how it doesn’t deliver on its initial world-building and character growth, and is more concerned with delivering rapid punches of action. It’s trying to run before it can walk, even when both issues stand solidly enough on their own merits. The downbeat emotions of #1 and the blitzkrieg rush of #2 are superbly drawn in their own right, but there’s little cohesion between the pair. Of course, there’s every chance that Divided Kingdom will improve with future issues, especially as the now powerfully-enhanced Dan is on course to become part of a larger mission to win Britain’s freedom. Divided Kingom just needs to clarify itself with its story and characters in order to genuinely reflect its exciting premise.

You can discover more about Divided Kingdom from its online store, as well as follow the comic on Instagram to keep up to date with news of the next issue. Are you already a fan of the series? Let us know in the comments section below or send us a Tweet!