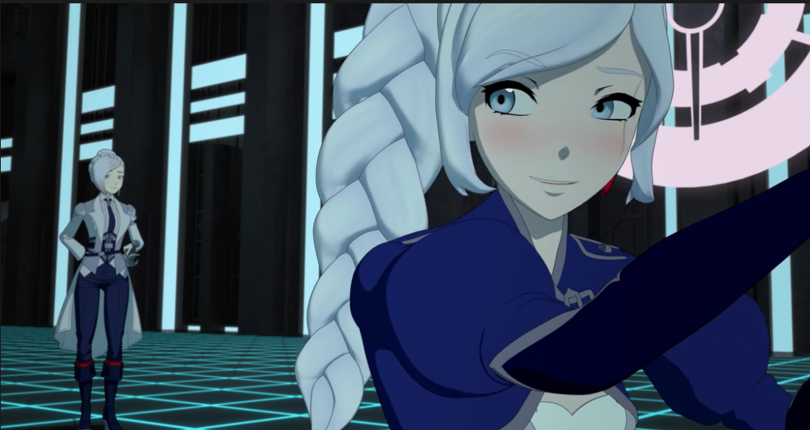 Last episode saw Team RWBY and Team JNPR becoming officially licensed Huntsmen. The fifth episode of RWBY’s seventh volume acts as both a pay off and the set up for the second act. The first half of the episode dives in and out of the new daily lives of our spanking new Huntsmen and Huntresses – via a wacky montage!

Penny wakes up Team RWBY for their first day as Huntresses, though only Ruby seems truly thrilled about this. The gang’s primary role is to guard Amity Colosseum, its launch site, and fend off any Grimm that may impede progress. All construction resources in Mantle are being diverted to the project, leaving holes in the city’s defensive walls.

The teams spar and train within a virtual chamber similar to the X-Men’s Danger Room. Ironwood trains Oscar to better fight, hoping their training will jog Ozpin from his hibernation. Team JNPR, including Oscar, face off against the glorious return of Team FNKI! Atlas’ zany team are back – Neon Katt, Flynt Coal, and the introduction of the other two members, Ivory and Cobalt, though they have non-speaking parts. Nora and Neon are fighting each other, the trolling kitty cat badmouthing Nora and Ren’s relationship. Nora is literally flying around on her hammer like a broomstick, eventually giving her a black eye.

Ruby, Penny, Qrow, and Clover drive through the icy wilderness in a long, dull supply run (but there are penguins!). Penny expresses her joy on working with Ruby, who asks if she has made anymore outside the group. Since Penny is the official protector of Mantle, we learn Ironwood stripped Penny of her team, and told her she has no time for friends. Penny is conflicted about this in her own way, wishing to balance duty and personal desires as well. Qrow and Clover play a game of cards, though Clover’s good luck makes assures victory for him every round. In the following chat, Qrow turns out to have gone sober, but is still deflecting compliments from his new buddy. There have been theories of a traitor in the Ace Ops, working for Arthur Watts. If there is, let it not be Clover. He’s way too nice to be evil.

Ruby spots trouble ahead, Clover ordering Penny to remain in the truck should they need the element of surprise. Blocking the path of the truck is Robin Hill, who is a hero of Mantle, running in the election opposite Jacque Schnee. Robin has her own team of “happy huntresses”, including an adorable sheep Faunus, Fiona, who must be protected at all costs. Wooloo as a Faunus! Robin comments to her team they will show Clover their teeth, alluding to their graffiti seen back in episode one. They may have a connection to that phrase. Is it a political movement?

Robin is rather shrewd with Clover, asking why important materials for Mantle are being sent to Amity instead. Clover tries to play it cool, but Robin isn’t biting. Interestingly, the two seem to know each other on a personal level. Both are Atlas Academy graduates, so there is the possibility that they were in the same year. Believing Mantle deserves to know just what their resources are being diverted for, Robin tries to get Clover to open up and tell her – specifically using the phrase of “Tell me”. The way she says it and the hand gesture hints, as theorised by brainy YouTube creators, that Robin’s Semblance may be vocal persuasion.

This doesn’t seem to work on Clover, perhaps due to his own lucky Semblance. Robin asks Ruby instead, but Clover interrupts. Things get tense, only for Penny to spring out of the truck, exposing that the other two members of Robin’s group, Joanna and May, are sneaking up on the group from behind. They wield long staffs with crossbows on both ends, one of them sporting an invisibility Semblance. Robin regards Penny with a mix of respect and contempt, considering she directly works for Ironwood, the cause of Mantle’s problems. Penny politely asks to pass, though with a little threat in her tone. Robin reluctantly lets the group leave, Clover wishing her good fortune in the election. But, Robin wants to know the truth, whatever it takes.

Elsewhere, Weiss and Winter have a spar using their summons. Winter wins with her giant ice Beowolf, though her attempts to hide her sisterly pride are not so victorious. The Schnee sisters have a cozy chat about their family name and legacy, and the state of Atlas. When it comes to distrust towards Ironwood, Winter assures Weiss that the general isn’t hiding secrets from her. Far from it, in fact.

Winter guides Weiss through a hospital, down into a contained, private ward, where both Weiss and we are introduced to the Winter Maiden. Weiss watches from a soundproof observation room as Winter kindly interacts with the bedridden maiden, named Fria. In a cutaway, the sisters observe Fria, who is likely to pass away all too soon. Winter explains she is the only person allowed to visit Fria. Weiss puts two-and-two together, realising that Ironwood plans for Winter to succeed Fria as the next Winter Maiden. Another family member related to a main character who is a maiden? This should be interesting. Winter is the direct opposite to Raven, willing to fulfil her duty, and not turn tail and run away.

Weiss takes it with some offence, believing Ironwood has dictated Winter’s military career. However, Winter explains that becoming the new maiden is her own choice, even if Ironwood groomed her for such a purpose. He pitched her the idea following the Fall of Beacon, so it was an idea and not a demand. Weiss and Winter agree that they had to carve out their own paths in life. Winter gets a message, revealing dear old daddy is holding a press conference in relation to his run for councilman.

Jacque announces if he wins, he shall oppose Ironwood’s embargo. Though trying to play the sympathy, Atlas’ biggest douchenozzle announces he has shut all SDC operations in Mantle! Yeah, that’s so totally not going to enrage Mantle’s entire populace in one swoop. Way to go, genius. Of course, it was likely intentional, at least on Watts’ part to bring about chaos and bring down the kingdom. Winter realises that Jacque just provided the spark for the inevitable chaos, kicked off when Purple Hat Guy from episode one smashes up a broadcast screen and all hell breaks loose in Mantle.

While the riots and presumed civil war between Atlas and Mantle will be the major focus in the coming episodes, Winter’s destiny is the most intriguing. Though Fria is in a secure facility, there is every possibility that the badguys locate her. Watts has mentioned he designed the security systems of Atlas, so a little hacking could expose Fria’s location. Let’s not forget Cinder and Neo will show up at some point; Neo’s shapeshifting could come in handy to bypass security checkpoints. And we all know Cinder craves the power of the other maidens.

On the other hand, the power transfer between Fria and Winter may go smoothly. A plot twist would not be unwelcome. Perhaps Weiss could become the maiden instead, making her a top priority and target for all parties. Bringing both Raven and Cinder into the fold would be awesome, leading to a battle between three maidens would blow minds! At the moment, Mantle looks ready to implode, and dark times lie ahead for our heroes.

What were your thoughts on this episode of RWBY? What mayhem awaits the people of Mantle? Will the powers of the Winter Maiden be passed on to the right person? Leave a comment below, or on our Twitter and/or Facebook feed.