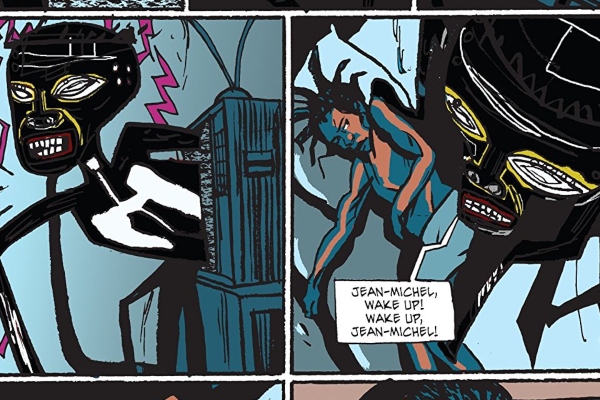 Is it really so bad when biographies blend fact as much as fiction? We consume biographies to come away with a true historical account of the individual or event in question, but when the work itself purposefully positions itself as balancing the truth and the untruth, do we, as the reader, have any right to complain? That’s the question I find myself asking when reading Julian Voloj and Soren Mosdal‘s frivolous comic biography of artist Jean-Michel Basquiat. As Art Masters: Basquiat plays fast and loose with fact and fiction of the artist’s life, it rapidly descends into a forceful, mind-numbing sort of incoherency.

Considering the strengths and weaknesses at play in Basquiat, it’s not its slamming together of fantasy and reality that’s the issue here. One of the best comics I’ve read from SelfMadeHero is another comic biography that meshes together fact and fictional; Nick Cave: Mercy on Me, an infinitely enjoyable celebration of the mystique as much as the man himself. Clearly then, the idea works. The issue with Basquiat is how this disregarding mixture of what’s true and what isn’t becomes a platform for the comic to execute a piercing psychedelic tone that becomes overwhelming very early on. By the end of the comic, the reader is left barely intact. 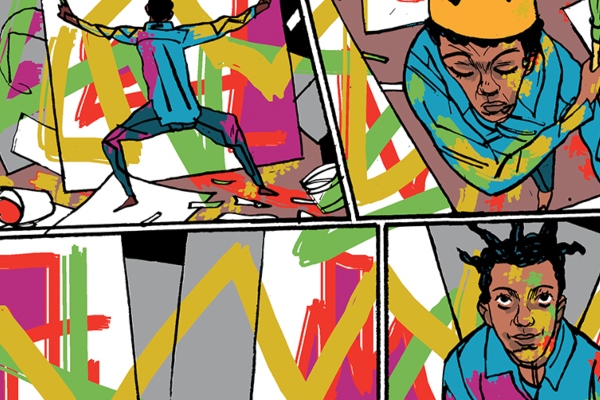 There’s a tendency in comic biographies of artists to capture the artistic style of their subject. At least, that’s the intention. Depending on the quality of the comic itself, that capturing can be rendered as a reflection, celebration, or impersonation. Basquiat feels like the later. Mosdal’s art is rapid, intense, often without consideration. It rattles through at breakneck speed, popping with ragged, exuberant colour. There’s little consideration, though. No exploration of *why* Basquiat’s art worked the way it did. Past Art Masters comics such as Magritte: This Is Not A Biography and Dali exploited the artistic style of their subject into meta-commentary within the comics themselves, enabling those biographies to effortlessly capture and celebrate the prowess of their subjects. There’s little of that at work in Basquiat.

Voloj’s narrative is as unkempt and self-destructive as the artist himself. Basquiat‘s introspection into its subject is brief, to the point where it feels like it can’t be bothered to explore such ideas. For the most part, we charge through one decadent era of Basquiat’s life in the late ’70s/early ’80s New York to the next, with little substance or comment. What makes Basquiat particularly unconvincing is how keen it is to cling to the figure of the artist as a self-destructive figure who suffers no consequence of their actions. It’s a humdrum method of celebrating a vibrant figure of New York’s art scene. 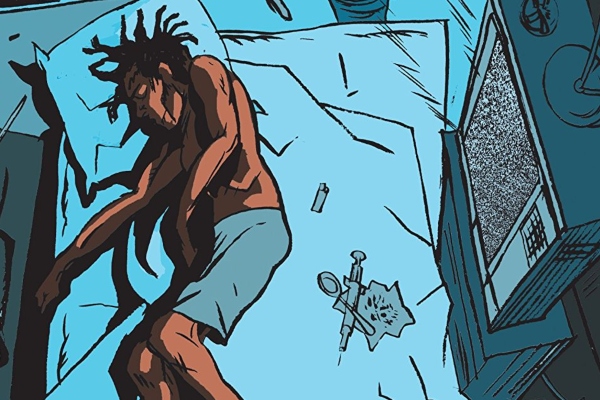 At times compelling in its nonstop chaos, Basquiat is an exhausting affair. That sense of chaos may well be a suitable tip-of-the-hat to Basquiat’s artistic personality, but in the context of this comic, it comes at the expense of any genuine story being told. If there is an actual story trying to break through the surface-level madness at work here, it’s hard to pinpoint. Sometimes engaging, sometimes evocative, always insane, Basquiat amounts to little more than chaos for the sake of chaos.

You can purchase your copy of Art Masters: Basquiat here! If you’ve had a chance to read this comic, let us know in the comments below or send us your thoughts on Twitter!