Recently, the cultural discussions of transgender and gender-fluid people have increased, and with it conversations of how trans and non-binary people are represented in the media. Eve of Extinction therefore becomes a timely comic. One of the four titles that form TKO’s second wave of comics, the publisher that proclaims to shake up the manner in which comics are consumed has delivered a comic that appears, from its premise, to contribute to our ongoing discussions of transgender and non-binary people’s inclusivity in fiction. Unfortunately, Eve of Extinction has little to add to the conversation.

Co-written by Sal and Steven Simeon, with art provided by Nik Virella, Ruth Redmond and Issac Goodheart, and lettered by Ariana Maher, Eve of Extinction squanders an opportunity to deliver a considered comment on a complex issue facing trans and non-binary people, i.e. to be included. The comic’s premise of a band of women attempting to outrun every man around them when a mysterious, toxic rain turns all men into savage monsters aggressively splits these two genders into separate categories. A problematic failure to acknowledge how this apocalyptic turn of events affects anyone who isn’t cisgender feels like a huge misstep for a comic poised to explore questions of gender identity against a horror backdrop. 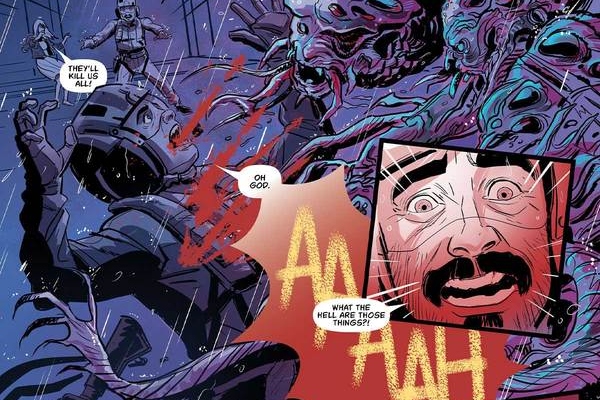 To make Eve of Extinction even more anti-climactic, the explorations it does manage to deliver feel superficial. Main heroines Christine, Elizabeth and Antonia bear interesting dynamics in their disjointed relationship, with Christine being Antonia’s estranged mother, and Elizabeth being the partner of Antonia’s dad, and Christine’s ex. There’s butting of heads, clashing of morals, past secrets unearthed, but all eventually find peace. It’s humdrum. Even more humdrum when its zombie backdrop is so routine, quickly devolving into uninspired survivalist fare.

Appearance-wise, Eve of Extinction at least looks the part. Virella, Redmond and Goodheart draw and colour on multiple issues, giving Eve of Extinction a slightly uneven feel when different artistic styles come into play, but Redmond’s colours, from #2 to #6, keeps things tight. The bright, trimmed colours and art in #1 clash wildly with the more grimacing vibes of #6, but overall, there’s plenty of visual skill at work in this comic. 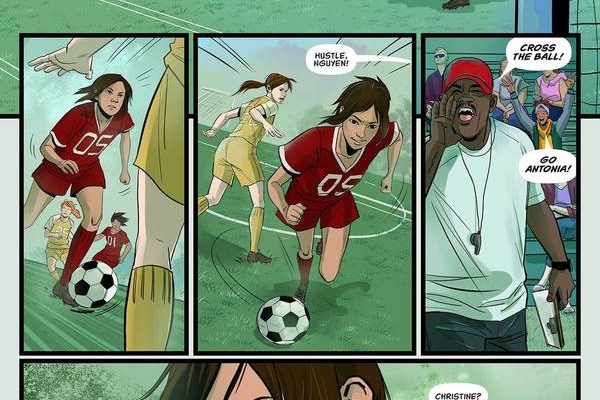 Virella’s line art throughout issues #1 to #4 is a slick, clean affair, but it’s not until Goodhart takes over from issue #5 onwards that Eve of Extinction becomes more distinct. A heavier reliance on shadow as a mood filler and some impressive action set-pieces help to bolster the comic towards its conclusion. Goodhart makes strong usage of total darkness to fill out panels. Virella isn’t without her own style too, showing a dab hand at character’s expressions that burst with personality and emotion. One wonders how much more impact these artist’s talents would have if the narrative better explored its own implications.

Eve of Extinction doesn’t compliment TKO’s mission of being the next big thing in comics at all. Devoid of original ideas whilst failing to deliver on the premise it baits you with, Eve of Extinction is an unfortunate misstep from otherwise talented creators. Steve Simeon at least acknowledged the lack of non-cisgender representation as an error when responding to a separate review of the comic. It’s a welcome admission, but the damage is already done. At best, Eve of Extinction is visually spirited, but annoyingly dull elsewhere. At worst, it’s regressive and inconsiderate to contemporary attitudes towards gender. An overly binary comic in an increasingly non-binary world.

You can discover more about Eve of Extinction from TKO Studios. Have you already read the comic? Let us know in the comments section or send us a Tweet!