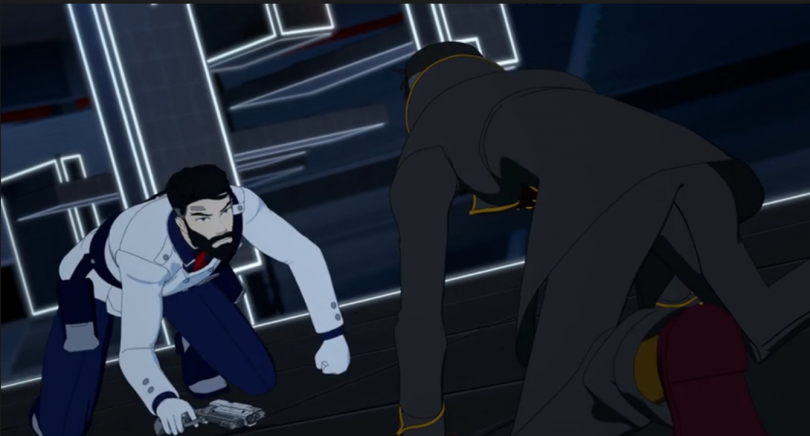 The eleventh episode of RWBY’s seventh volume, “Gravity”, dives down a deep dark chasm of high emotions and thunderous intensity. We all knew General Ironwood teetered between reason and irrationality. Though pulled from the brink by those around him, Ironwood’s fear, paranoia, and need for victory are slowly clouding his judgement. Though plans and partnerships are in place, this episode finally pushes the button for the good general to jump down the slippery slope. Atlas has always faced its own potential fall, and it may be James Ironwood who dooms it.

The episode begins with a truly stunning battle between Ironwood and Arthur Watts in Amity Tower. The fight could easily have been planned out as brawn vs. brains, but Ironwood happens to have both. Ironwood and Watts try to outfox each other in a cat-and-mouse game, using the arena’s gravity duty, and their own wits. Both count down each other’s ammo, in a game of wits and cool guns. During this, we learn Watts is bitter and jealous that Ironwood chose Pietro over his own genius; a resentment that drove him straight to Salem.

Though a genius and being a complete chessmaster in this volume, Watts meets his match with Ironwood. Even after Watts traps his arm in a light dust forcefield, Ironwood sacrifices it to overpower his opponent. As Ironwood says, he will make any sacrifice to protect Atlas. He dangles Watts over a magma pool, though the doctor is amused by his vow, knowing he will indeed risk all for victory. The battle’s animation and choreography is fantastic, as is the background track performed by Caleb Hyles.

Qrow, Clover, and Robin’s battle with Tyrian is not quite as amazing, but is still an enjoyable brawl. Though Tyrian is a wicked berserker, he’s no match for an exploding crossbow bolt to the mouth (which Tyrian caught in his teeth by the way). Someone’s been taking inspiration from Hawkeye. Robin finishes the nutter off with a well earned kick to the head.

Ironwood returns to his office, with his arm in a cast, and carrying Watts’ mystery briefcase. Whether or not he cremated Watts is unknown, but with the news of Tyrian’s arrest, it looks like hope is restored for Ironwood. That is until he sees something on his desk that completely shatters his resolve.

Winter is evacuating students until contacted by Ironwood, who asks her to check if anyone has broken into the academy. She runs off to investigate, unaware that Cinder has snuck in, and is on the prowl for the Winter Maiden. Penny is given unheard orders, whilst Team RWBY and the Ace Ops (sans Clover) are summoned to Ironwood’s office. Team JNPR tag along, but go to find Oscar beforehand.

The group go to Ironwood’s office, where he reveals someone left him a black queen chess piece made of glass. Ruby recognises the glass handiwork, realising that Cinder is alive and in Atlas. Ironwood rants and raves in paranoia, frantically panicking that Salem may be one step ahead of them. Although Team RWBY rally behind Ironwood, he is not so trusting anymore, asking them how Robin knew about Amity Tower. Yang admits she and Blake told her the truth, leading to frenzied bickering between everyone.

As tempers flare, Watts’ briefcase begins to move, releasing Salem’s seer Grimm from it. The Grimm then commits suicide, summoning a black smog, which materialises as Salem herself. At last, heroes and villain meet at last. Ironwood backs away into the nearest wall as Salem congratulates the gang for defeating Watts. But, Salem tells Team RWBY that all the chaos wrought by Watts was a mere build up to her own arrival.

Salem tries to persuade Ironwood to surrender the Relics to her, and she will spare Atlas, in a surprisingly alluring, almost motherly manner. Ruby challenges Salem, revealing they know everything about her, including her failures, vowing to stop her.

Salem then drops the biggest clanger thus far, revealing that Summer Rose, Ruby’s mother, said something quite similar – and that “she was wrong too”. This heavily implies, if not confirms, that Summer’s secret mission was to stop Salem, and failed. Ruby’s Silver Eyes go haywire as she breaks down in tears. Salem may have caused this strange reaction from her eyes. Is it possible she created the gift of Silver Eyes to begin with? Salem vanishes as Ruby bawls, comforted by Yang. This is one of the most chilling scenes in the series, fantastically performed by Jen Taylor and Lindsay Jones.

The Ace Ops note that the kingdom’s outer defences would alert them of an impending attack. Ironwood theorises they’ve already been destroyed, likely unnoticed due to Watts and Tyrian. The gang realise Ironwood lied about Amity Tower being ready to launch, using it as a lie to lure in Watts. Ironwood informs Weiss that he has sent Winter to inherit the power of the Winter Maiden, planning to secure the Relics. When Ruby points out he allowed them to keep the Relic of Knowledge, Ironwood explains he changed his mind after learning of Team RWBY’s lies.

Ironwood announces his new plan: To apply the plan for Amity to Atlas, using the Relic to raise the kingdom up into the higher atmosphere away from Salem’s touch. The sacrifice will be Mantle’s doom. Team RWBY, particularly Weiss, watch on in despair as Ironwood practically jumps off the path of reason. Ruby tries to rationalise that they have a chance to reunite the world, but is shot down by Ironwood. The rest of the team opt to make a stand against the enemy than retreat. They turn to the Ace Ops for support, but they, aside from a visibly conflicted Marrow, agree to follow Ironwood’s orders.

Their debate about the responsibilities of Huntsmen and Huntresses is disrupted when Ironwood plans to declare martial law on Atlas, which he has threatened to do repeatedly. Jaune calls at the best or worst time possible with apparent bad news. Ruby vaults over Ironwood’s desk, somehow managing to do a brief conference call to inform Team JNPR, Winter, Penny, and Qrow’s group of Ironwood’s plans. Clover looks particularly stunned by this news.

Ironwood cuts off the scrolls and heads for the door, apologising for what must come, placing Team RWBY under arrest. Ruby tells him that they won’t come quietly, to which Ironwood accepts with some sadness. Now, our heroines find themselves facing off against the Ace Ops.

Jaune, Nora, and Ren have their only troubles, for it looks like Oscar has gone missing. His room is trashed, Atlesian paladins lie in pieces, and scorch marks line the walls. Cinder or Neo may have taken him, or perhaps Oscar fought against the androids, which Ironwood could have sent to secure him and the Relic.

What a superb episode, headlined by superb writing and acting from Rooster Teeth. While accusations of disloyalty were thrown back and forth, sides will probably be chosen come next episode. Winter may be the most conflicted, while Penny will probably side with Team RWBY. Clover and Marrow may be the wild cards of the Ace Ops. Most importantly, will Team RWBY rebel, and what has become of Oscar?

What were your thoughts on this episode of RWBY? Has Ironwood gone too far? What happened to Watts? Will Cinder get her claws on the Winter Maiden’s powers? Leave a comment below, or on our Twitter feed.