Home » Atmosphere of Nostalgia: In Conversation with Bruce Kim, Wild Strawberries at the World’s End Writer 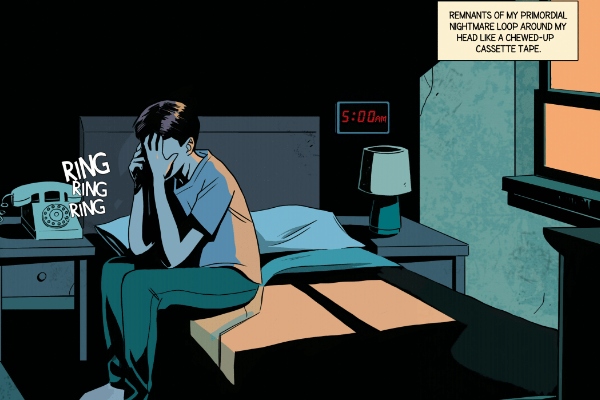 Bruce Kim and Katia Vecchio‘s Wild Strawberries at the World’s End left us enthralled. A quiet, brooding murder-mystery set in the heart of rural Korea, the comic’s dark heart won us over with its intriguing story and bewitching art. We recently caught up with Kim to discover more about the comic’s creation, including its various cinematic and sequential influences.

A Place To Hang Your Cape: This is your first comic, what inspired you to write this story?

Bruce Kim: I moved to the US from Korea for college and have been here for more than a decade at this point. When I turned 30, I noticed how increasingly the concept of “home” was becoming vague to me. Whenever, I visit Korea, I notice how disconnected I am. At the same time, visiting the old streets and places where so much history lives is always such a powerful experience.

The title of the book is a pretty obvious nod to Ingmar Bergman’s Wild Strawberries. There is a sequence in the middle of the film where Isak, an old professor, visits his childhood home and see his memories come alive in front of his eyes. That scene and the movie really resonated with me and captured how I was feeling.

I got into comics because of Vertigo Comics. In particular, books like Unknown Solider, Scalped, and 100 Bullets made me believe that the medium has unlimited potential. My goal was to create a comic book with Vertigo sensibility and Korean texture, if that makes any sense.

I’m still not sure if I got close to that goal. 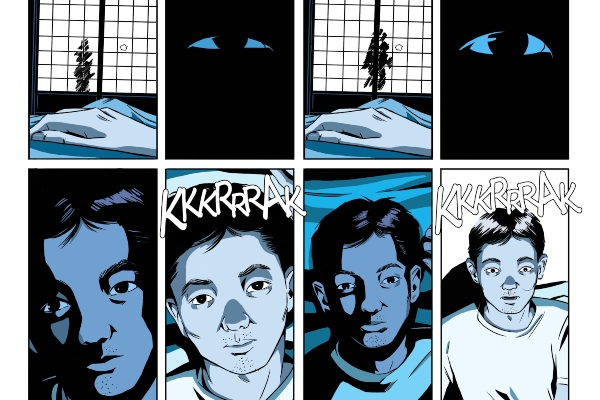 AP2HYC: Wild Strawberries at the World’s End is a comic that leans heavily on crafting an uneasy mood. How might you want the reader to feel when reading this comic?

Kim: Our primary goal was to make the reader feel the place. I wanted to make the readers feel that they are in a specific place and time. Going back to Vertigo, Scalped is my favourite book of all-time, and one of its strength is how much personality its setting has.

To achieve this specificity, we did a lot of study before starting on the project. Especially given that Katia is from Italy, communicating the cultural texture of Korea was important. Bong Joon Ho just won the Oscar with his latest film Parasite. I am really excited that he is finally getting the recognition he deserves, but as good as Parasite is his best film is still Memories of Murder (a film about the real-life serial killer case set in a rural town).  I recommended Katia to watch Memories of Murder and several other Korean New Wave films (Wailing, Handmaiden).

There is something distinctly beautiful and yet mysterious about rural towns in Korea.

While Korean films and comics were helpful reference points, some key elements of the book came from my childhood experience. One of the central mysteries of the book revolves around a shanty town. South Korea was still in a transitional state in the 90s. Even though I grew-up in the city, there were many shanty towns in the middle of the city. I had friends who lived in those makeshift towns. Over the decade, they all disappeared, and there are malls and parks in those spots, which made me wonder what happened to everyone who lived there.

That became the seed of the mystery. 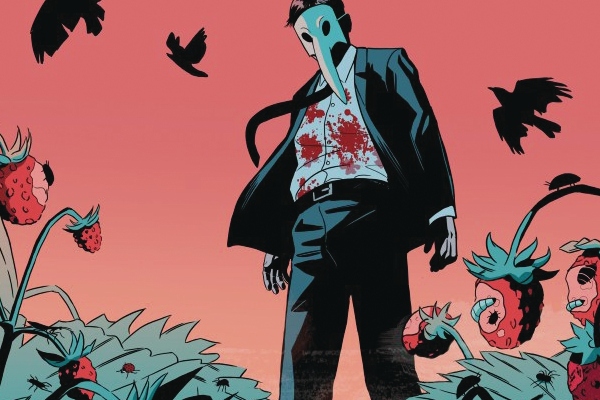 AP2HYC: Spinning off from that, I felt it had a deliberately cryptic resolution. What did your writing process of this comic involve and did it take inspirations from anything specific?

Kim: I worked back from the ending.

I know that contradicts a common conception of what writers do, but I had a specific image that I wanted to end the story with and worked from there.

A very specific inspiration was Ales Kot and Will Tempest’s Zero issue #5. If you’ve read that book, you will remember that the end reveal is structured very similarly. I don’t want to speak too much because I’m worried that I might spoil Zero. That series was a huge influence in many ways – especially the technical aspects of visual storytelling.

AP2HYC: The visuals work as effectively as the narrative in creating the comic’s strange atmosphere. What’s it been like working with Katia?

Kim: I think every text on a comic book page should justify its existence. This can mean two things: 1) the information cannot be conveyed with visuals only; 2) the prose is really good and interacts with the image in an interesting way.

When you work with an artist as talented as Katia, your job as a writer is to cut down the text as much as possible. The book is balancing drastically different tones at times, which requires precision from both writing and art. We went through multiple iterations to cut down the text and refine how the story was told.

There is a crucial close-up towards the end that shows the main character’s inner struggle. It’s a scene that juggles multiple emotions and themes. Initially, I wrote the scene with narrations. However, after I got Katia’s art, I got rid of the text because her art conveyed everything. Communicating complex emotion with facial expression alone is an incredibly difficult task for an artist, and Katia was able to do it. 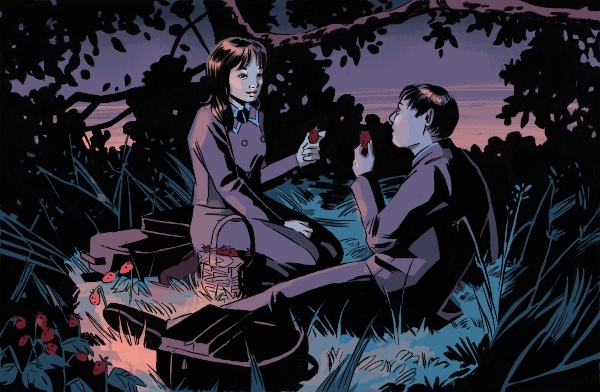 AP2HYC: What makes her the perfect artist for this comic?

Kim: Wild Strawberries at the World’s End is, as you pointed out, a book that relies heavily on mood and atmosphere. At the same time, many key sequences rely on pure visual storytelling (the 16-panels page turn reveal being a good example).

It’s incredibly rare to find an artist good at both. There are many legendary artists who are good at one but not the other.

Katia is great at both.

In fact, that’s precisely why I reached out to her. I saw her art for the first time during the Millarworld contest. For artists, all the samples were posted publicly. Katia posted a 3-page wordless horror comic. It was astonishing how clear her storytelling was: perfect pacing; deliberate panel flow; creating suspense with timing. It was also an incredibly disturbing mood piece.

We both didn’t win the contest, but I reached out to her. I’m lucky that she said yes to the collaboration given that I didn’t have any credit at the time.

My script was very detailed in its visual direction. I often included thumbnail sketches and visual references as well. I think having a detailed visual idea as a writer gives the artist something to respond to. As a writer, you get this insecure urge that you should do more, which leads to including more texts. By engaging with the artist with visual ideas, I think it helps you overcome this insecurity.

It should also be mentioned how much research she has done. When I show our book to Koreans, they are all shocked that it was drawn by an Italian artist. She captured the details of Korea so well that I can only imagine how much work she had to do. 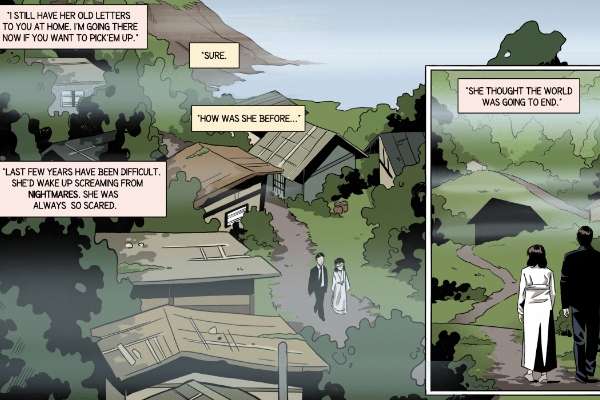 AP2HYC: How does it feel to bring your first comic into the world?

Kim: It’s hard to articulate how fulfilling it was to hold the book in my hand.

There is something innately different about creating something. Don’t you think? It’s different from any other form of professional and personal accomplishments. Seeing an idea that lived in my mind for such a long time realized in a printed format is such a special feeling.

Also creating the book gave me opportunities to meet and engage with my heroes. I had a chance to share my book with Karen Berger during a book event, and she was kind enough to give me some feedback. Joshua Dysart, whose Unknown Soldier is one of the pivotal books that inspired me to write, read the book and gave us encouragement.

The fact that these Vertigo legends read my book still feels very unreal to me.

AP2HYC: Do you have any other projects on the horizon?

Kim: I am working on a horror script about a lone survivor living on a deserted island after a cataclysmic event. It’s a story that was inspired by the stories of Japanese holdouts during WW2. It’s taking a bit longer than expected, but hopefully I can finish the script soon as I prefer to have a completed script before I engage any artists.

You can discover more about Kim’s work via his website, as well as know more about Wild Strawberries at the World’s End from Source Point Press. Have you already partaken of the comic’s cryptic treats? Let us know in the comments section or send us a Tweet!