Home » Morbius May Bleed its Way Through the Marvel Cinematic Universe, But at What Cost?

At the wake of the devastation that is Spider-Man: Far From Home, along came the bitter summer taste of Sony and Disney’s break-up. This left behind an air of uncertainty that settled quite uncomfortably between the months of August and September 2019. Some may even say it was an experience even worse than that of the death of Tony Stark in Avengers: Endgame. Flash forward to now and our first glimpse of Morbius.

The Morbius trailer is its own piece of short filmography. It’s complete with a mid-credit scene that sparked many prying questions on the future of Sony’s Spider universe. But many would be relieved and very quick to point out that the appearance of one Michael Keaton further secures Peter Parker’s place within the world of the Avengers. Even more so than that, the word ‘murderer’ thrown carelessly on top of the quick cameo of Spider-Man in the trailer is very much in line with the mid-credit sequence from Far From Home. 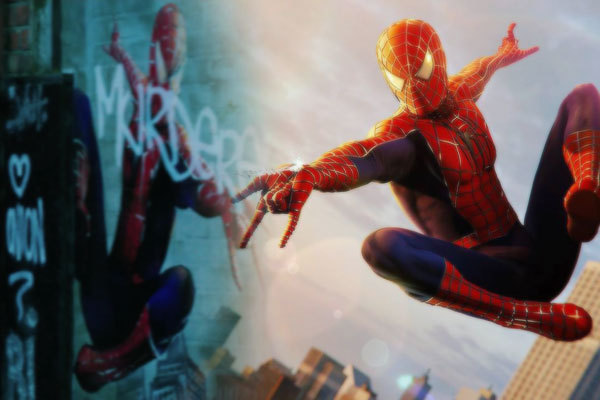 A gusher of possibilities have opened up ever since the trailer was released. Alongside that came a multitude of many different questions, all ranging from varying degrees of ‘will J. K. Simmons come back to play J. Jonah Jameson’ to ‘is it really Tom Holland’s Spider-Man or will it be Tobey Maguire‘s Spider-Man’? All of these are valid questions given the presence of Keaton, and the graffiti shot of Spider-Man donning the Sam Raimi suit found within the trailer. But the question not a lot of people seem to be asking is, how far will Sony associate their films with the Marvel Cinematic Universe before deciding, enough is enough? This isn’t saying that being part of that universe and having Spider-Man be with all the current Avengers is inherently a bad thing. This is just a quick reminder of how easy this shared universe can be taken away from the fans.

According to IMDB, Morbius entered post-production on the 6th of July in 2019, and the news of Sony and Disney’s break-up broke through online headlines on the 20th of August, 2019. If the story of Morbius was always supposed to intertwine with the overarching world of Holland’s Spider-Man within the MCU – something that would have been decided during the filming of Keaton’s scenes – it would be safe to say that regardless of whether or not Keaton is reprising his role as Adrian Toomes in Morbius, the involvement of the MCU in this particular film matters very little. Not to say that it is not going to be a factor. It may be a factor, just probably not big enough of a factor to affect any and all ongoing storylines planned for the future of the MCU.

To add to that, according to a report by IGN, Holland’s contract only stretches as far as the third Spider-Man film, providing no new contracts have been signed behind the scenes. It would make sense for Sony and Disney to work together one last time to give a proper adieu to Holland’s Spider-Man in this third film. Where Sony decides to go from there, whether or not Holland’s Spider-Man is involved, is entirely up to them.

All of that being said, Morbius as a character could add an interesting dynamic to the MCU and its ever-increasing roster of diverse heroes. The introduction of a character who crosses not only the boundary between life and death, of hero and villain, but also of science and fantasy can help lift the MCU off of the seemingly stagnant ground they stand on. While the realism these films portray have become a welcomed staple, they are also an extremely polarizing routine for its long-time loyal fans. With tones of horror and flavors of the supernatural, Morbius could be the first of many future MCU films to test uncharted genres. If it succeeds in enthralling film audiences, this could help characters the likes of Shang Chi and Moon Knight flourish better in a post-Iron Man cinematic universe. Furthermore, with the ever-looming presence of Holland’s inevitable future exit from the MCU, Morbius may be the spark needed to ignite a Spider Universe that no longer centers on Peter Parker, something that has been a longtime coming.

There is no harm in hoping for the best for this shared universe, and theorizing how it might all play out. But that feeling of uncertainty, and the questions many people encountered in the break between Sony and Disney; it is a hard feeling to come to terms with. Many of us did it for just one month and it was agony. Are we prepared to see that same thing through a second time again?

Have something to say about the potential of a shared Spiderverse with the MCU? If you do, let us know what you think in the comments below or Twitter!