In Drones, Matt Lowery and Tyrell Cannon bring a sharp, grim energy to well-worn ideas of science fiction’s dalliance with war and with positioning humanity as a destructive, invasive force that doesn’t care for the consequences of its actions. In the world of Drones, war has become both gargantuan yet casual. Space battles against aliens are now done by remote control from glum, decrepit offices in cityscapes densely packed and that blend into a drab, soulless environment. Wars themselves aren’t so much fought as performed like video games, their fighters care only for high scores, not bothered by the high casualties they create.

Cannon’s art isn’t black-and-white so much as its grey, reflecting a bland existence for humanity. He draws a convincingly humdrum routine as the workers of Patriotech’s Department of Defense and LifeTech file in and out of the concrete jungle they work in. It’s a confident capture of Lowery’s world. The quietly nightmarish tone to Cannon’s art makes Drones transmit its story and themes with a razor-like confidence. 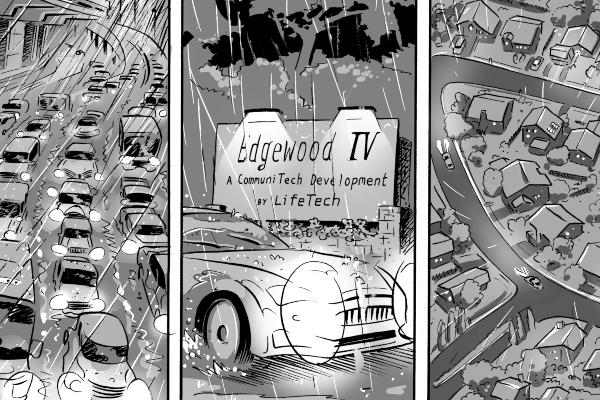 Lowery and Cannon waste no time in cementing Drones‘ bleak tone, allowing its other themes to hit with palpable impact. The core idea that ripples through Drones‘ veins is the self-destructive gluttony of war. This is channelled through our protagonist, Captain Jerry Neely, high scorer of Patriotech, who rapidly experiences harsh hallucinations of the aliens he’s fighting against blending into his world. In a curious creative twist, Jerry has no dialogue throughout this short comic. This deliberate choice has the effect of making the reader come away from Drones feeling underserved. There’s no introspection, no reflection, no agency from Jerry whatsoever. He’s little more than a semi-conscious vessel that serves to allow Drones‘ wider themes to flow from creator to the reader. He’s not a character. He’s a conduit, a transmitter.

What does make Jerry an engaging watch is his visual depiction at the hands of Cannon. Throughout, Cannon draws Jerry as if in a trance-like state. The drama of Jerry’s world becoming distorted as this digital war probes his mind is meticulously communicated through Jerry’s body language, climaxing in a finale where reality loses its tangibility for Jerry. It’s as if Jerry is both fascinated and repulsed by the atrocities he commits digitally on a daily basis. The vagueness that Cannon and Lowrey concoct leaves things open to speculation, hooking the reader in further. 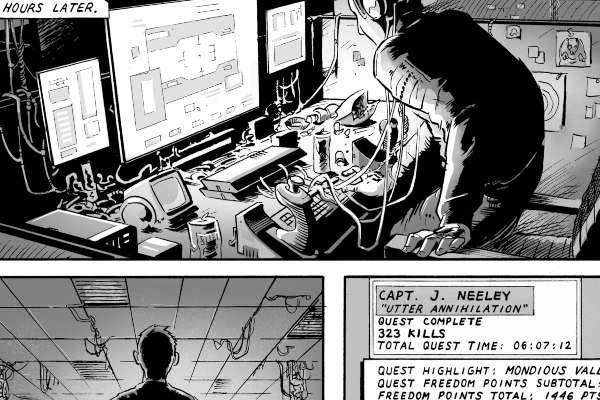 Drones isn’t the most sophisticated comic you’ll ever read, but it has a downbeat charm that’s all its own. Many recognisable tropes are featured here, yet the comic’s message resonants and is just a little bit mysterious. There’s a vague comment at play on the reality of war, reflected in the digital nature of the space war fought by Patriotech and Jerry’s visions being tricked. If war is viewed through a screen, is it real? What constitutes as real and what’s a nightmare in Drones? The comic leaves you asking more than being answered. With taught art and resonant story-telling, Drones‘ packs a fierce, meaty punch.

You can discover more of Lowery and Cannon‘s work from their respective websites. Are you a fan of either creator? Let us know in the comments section or send us a Tweet!