Home » EXIST: LONER Captures a Creator Finding Their Own Voice

The gargantuan amount of thematic ground that science fiction covers results in any contemporary piece of sci-fi media forced to think carefully and thoroughly if it wants to be a fresh, original piece of work. Monika Laprus-Wierzejska‘s debut graphic novel EXIST: LONER has trouble bringing new, unexplored perspectives to cyber-hacking tropes, but the comic packs in plenty of winning elements elsewhere and rarely lets the reader’s attention slip. The main issue with EXIST: LONER is how closely it riffs to plenty of well-worn ideas from Japanese cyberpunk manga and anime. Taking its Ghost in the Shell inspirations to heart, EXIST: LONER‘s world of humanity entering an age of digital upgrades and being plugged into a cyber environment induces flashbacks to a great number of sci-fi material that’s already tackled such ideas.

However, that shouldn’t prevent any newer forms of media from exploring the same ideas, it’s just that Laprus-Wierzejska’s work struggles to break free from these concepts in an effort to find its own voice. To the comic’s credit, it’s definitely searching for that distinct voice it clearly wants and those initial steps it takes to do so comes via its artwork. Laprus-Wierzejska’s line art and inks are downright intoxicating. The preciseness in her detailing makes each visual element of the comic stand to attention. Her depiction of Senesdrotte Vanars, a ‘mage’ of cyberspace whose training and implants make her something of a vigilante figure of the digital world, is a constant source of refreshment. She’s totally unsexualised, the male gaze being pleasingly absent throughout this comic. It’s little wonder then why Richard Mooney (who also assisted with EXIST: LONER‘s English translations) employs her talents on Daughter of Titan. EXIST: LONER‘s premise of Vanars journeying down a digital rabbithole in an effort to trace a mysterious figure who haunts her mind during her vigilante actions compliments Laprus-Wierzejska’s imaginative, underworld landscapes to great effect. 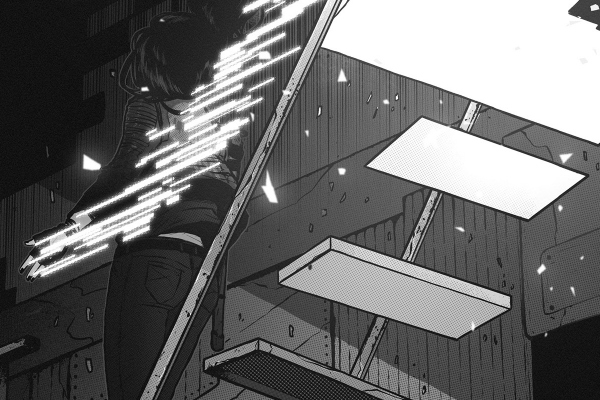 EXIST: LONER is drawn in almost a constant barrage of close-up shots of locations and characters, as if we only get to view this world through a keyhole. Perhaps that’s a reflection of Vanar’s own arc as EXIST: LONER lays the groundwork for a much larger story that suggests Senesdrotte’s world is much larger than she first thought. The extreme visual closeness of how EXIST: LONER looks also emphasises the underworld aspect of the comic’s world; seedy, unchartered, left to rot. What’s less well-executed are the action scenes. Compressed perspectives and jumbled angles result in sequences that aren’t as elegant as the rest of the comic.

The story’s uncluttered premise allows for it to rise in anticipation naturally, yet it’s also scattershot as numerous pieces of a much larger puzzle are presented to us which, at first glance, don’t appear to weave together as cohesively as they should. However, future issues may well contexualise this disparate approach to showing the reader all of EXIST‘s respective story components, including the forthcoming sequel, EXIST: DIRT. The obvious enthusiasm Laprus-Wierzejska has for bringing this story to life just about clears your mind of the overhanging reminder of the comic’s initial lack of original ideas. For now, EXIST gives the impression that it will become a story of agency as something, or someone, lurks inside Vanars, transforming her into a ruthless killing machine, which may ver well lead her into a fight for her sense of identity. Again, rather Ghost in the Shell-esque. 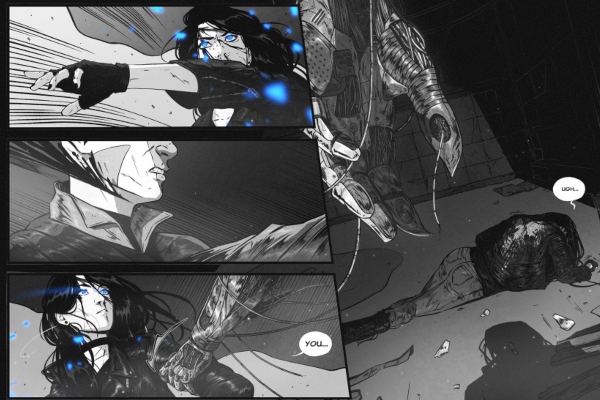 EXIST: LONER is a promising start from a new talent on the indie scene. There are smart ideas at work in this comic, ones that future chapters in this story will hopefully continue to steer in exciting, dynamic directions. For the most part, Laprus-Wierzejska’s art is infinitely lovely to pour over and gives EXIST: LONER a biting energy, its razor-sharp elegance giving the comic a visual confidence. We’re always in need of more fun, intelligent, female-created science fiction and given how EXIST: LONER establishes a world and characters that intrigue you, Laprus-Wierzejska has every opportunity to guide EXIST along to become the winner it’s keen to be.

You can discover more about Laprus-Wierzejska’s work from her website. Will you be journeying into this digitally enhanced world? Let us know in the comments section below or send us a Tweet!