Home » Humour in the Mundane: In Conversation with Rachael Smith, Creator of Quarantine Comix 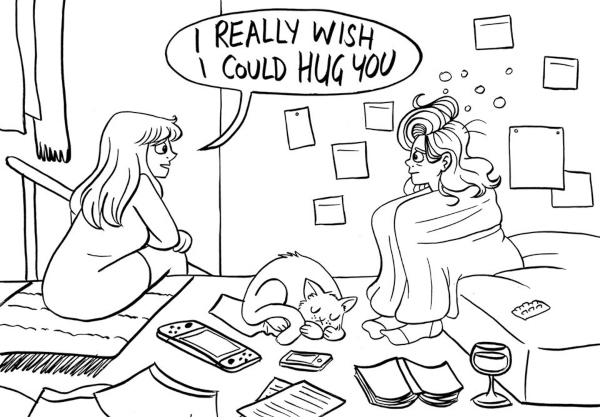 Rachael Smith was already a household name on the indie comic scene prior to the release of her autobiographical comics Wired Up Wrong and Stand In Your Power, however both of those comics cemented her witty voice as one that can open up discussions about mental health. In these troubling times, she’s now taken her trademark brand of dry, self-deprecating humour to her latest project, Quarantine Comix, a series of daily autobiographical comics that capture Smith’s deadpan humour superbly.

Quarantine Comix is avaliable to read for free from Smith’s social media channels, with several being produced a day. The comics themselves are sharp, spontaneous creations, cherry-picking at everyday situations in Smith’s life and pulling forth the unexpected comedy out of them. We caught up with Smith to discover more about Quarantine Comix!

A Place To Hang Your Cape: What inspired you to start doing these comics?

Rachael Smith: Like a lot of people, I was feeling pretty useless and upset about everything that was happening in the world. It got to the stage where I couldn’t really see the point in doing anything at all. My friend Heather came to see me (6ft away, obvs!) and gently suggested doing some comics about the situation. She said that if I was good at anything, it was making people feel less alone though my comics – as the responses to Wired Up Wrong and Stand in Your Power have shown. After that conversation I became excited about making work again, and I started #quarantinecomix a couple of days after.

AP2HYC: What do you hope people will get out of them?

Smith: I’m doing at least one a day (I usually manage two or three) so I hope they give people something to look forward to. I hope they make people feel less isolated as they’re pretty relatable I think!

AP2HYC: You’ve done diary comics in various forms in the past. What is it that first drew you (no pun intended) to diary comics?

Smith: I first came to diary comics in 2011 when I started the ‘One Good Thing’ project, where I drew a nice thing that happened to me every day in an effort to manage my mental health issues. Since then I’ve always enjoyed finding humour in the mundane.

AP2HYC: What else are you doing to keep busy during the quarantine? Any tips for people out there?

Smith: I’m pretty much just throwing myself into work at the moment. I’m lucky in that I actually have quite a lot on at the moment. Otherwise I’m reading a lot, playing Animal Crossing, and playing boardgames with my housemate. I have ‘Zoom’ dates with my boyfriend too, I miss him a lot but it helps to be able to see him when I chat with him.

AP2HYC: What other projects are you working on at the moment?

Smith: I’m chugging away at my new book Isabella & Blodwen which is funding over at Unbound, I’m working my way through lots of pet portraits which I always enjoy doing! Other than that I have a few very exciting projects on the go but nothing I can talk about yet, sorry!!

Are you a fan of Rachael’s output? Let us know in the comments section below or send us a Tweet!