Throughout his comic Repulsive Attraction, Patrick Steptoe‘s disdain for capitalist decadence is matched only by the visual energy he puts into creating sickeningly vibrant metaphors for such decadence. Repulsive Attraction is the latest comic from fledging Danish small press Backyard Barons and is a highly suitable title for their ongoing mission of bringing surreal pulp and psychedelic comics to life. Repulsive Attraction is made up of almost 30 comics that cast a bleak yet comical eye over the state of the world. Native land is swallowed whole by uncaring businessmen. Overworked employees discarded like broken toys. Tax-dodging corporations and social media giants rule with an iron fist. In Repulsive Attraction, there is no room for thematic subtly within this sequential depiction of humanity’s corporate soul.

Repulsive Attraction‘s slick, glossy colours gain a sickly flavour when joined with the violent, darkly amusing artwork throughout the comic. Steptoe gives his comic a neon glow that’s a perfect visual summary of the anti-capitalist stance Repulsive Attraction boasts. Each of the short comics has its own distinct palette yet all weave together into a tapestry of decadence. Steptoe’s disdain for corporate excess is symbolised in the destructive, transformative depiction of his characters. Throughout the comic, characters are routinely physically exploited, by themselves or others, a further comment on humanity’s self-destruction. Characters get shot, squashed, commit suicide, vomit, urinated on, mutate into monsters and have their skin ripped from their bodies. The last three are from the same strip alone. 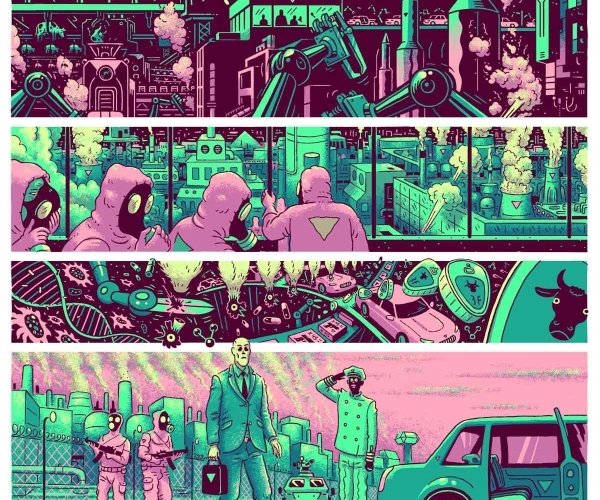 Narratively, whilst the comic’s wit remains energetic throughout, it suffers from a sense of repetition. Once you’ve read the first handful of strips, you get the gist of Repulsive Attraction, to the point where the comic repeats itself over and over again, albeit with a vigorous sense of humour. The biggest flaw in Repulsive Attraction then is how it merely delivers the same message in different guises, spoiling the overall perverse enjoyment of the comic. As if to soften this blow, there’s absolutely no spoken dialogue in Repulsive Attraction. So much of the comic is shown, rather than told, which is hugely welcome for a medium such as comics.

Your eyes are therefore drawn to the chaos residing within these pages. Steptoe looses no narrative momentum by eschewing dialogue between his characters, as each and every brief story leaps off of the page with clear precision. With no dialogue to guide Steptoe’s decadent characters along, each strip gains a riotous edge, as if we can’t quite predict how the story will end. However, the aforementioned repeating of the same core message of “humanity is bad” means that this narrative tool can’t quite blossom the way it wants to. Still, what does remain consistent throughout is the vibrant energy, channelled best through the comic’s wonderfully grotesque art and colour.

Whilst the comic’s repetition of its core message with no drastic variety in its execution scuppers its overall value, Repulsive Attraction is an energetic burst of sequential humour. The humour drips from each and every page with a comical menace, whilst the comic’s anti-capitalist message pulsates with a resounding, neon-caked throb. Repulsive Attraction is a strange yet alluring psychedelic trip.

You can discover more about Repulsive Attraction from Backyard Barons. Have you already been taken on this strange trip of a comic? Let us know in the comments section below or send us a Tweet!