Home » Better Worlds & Fresh Voices: In Conversation With the Editors of Maybe Someday

All We Ever Wanted‘s mixture of diverse creative voices and optimisic sequential story-telling made it a standout title from American small press A Wave Blue World. The publisher is now bringing a second collection of these speculative yet positive futures to life on Kickstarter with Maybe Someday: Stories of Promise, Visions of Hope. Where All We Ever Wanted centralised its stories by focusing on dystopian fiction, Maybe Someday‘s core theme focuses on how we may actually build ourselves the paths to a new and better world.

We caught up with the anthology’s trio of editors, Eric Palikci, Matt Miner and Tyler Chin-Tanner, to find out more about the creative process involved in Maybe Someday!

A Place To Hang Your Cape: Maybe Someday carries the same message of positivity in the face of adversity as All We Ever Wanted does. How are you ensuring that Maybe Someday stands on its own merits and is its own distinct comic?

Eric Palicki: Rather than simply looking at All We Ever Wanted and saying “More of that, please” (although, to be fair… I love the work we did on All We Ever Wanted and would make books like that forever), we loosened the genre restrictions somewhat for Maybe Someday to include more types of speculative fiction. The story I wrote, for example, veers into fantasy, and while no one indulged me, I would’ve welcomed an upbeat horror story. The emphasis here is on better worlds, not just better futures. In addition, we made efforts not to repeat creators between the books, in order to ensure fresh voices in this volume.

AP2HYC: How does your joint editorial approach work on these two anthologies, and has it changed at all for Maybe Someday?

Matt Miner: The three of us play to each others’ strengths and complement each other well, I feel. The only thing that’s really changed from All We Ever Wanted to Maybe Someday is that Tyler has been managing the artists, while Eric and I have been more focused on story and overall project mechanics. I like this team a ton, and I’m grateful to have them as collaborators and friends.

AP2HYC: What kind of styles of art would you say are on display in the anthology?

Miner: Everything from bubbly cartoony styles to gritty realism – the real fun is in seeing how these tremendously talented and skilled creators play to the book’s themes while being true to their individual styles. It’s a testament to how special this book is that even though the stories are all visually different, the book as a whole is gorgeous and cohesive. Everyone involved has been giving this 100% and bringing their A-Game, and I’m proud to be part of this. 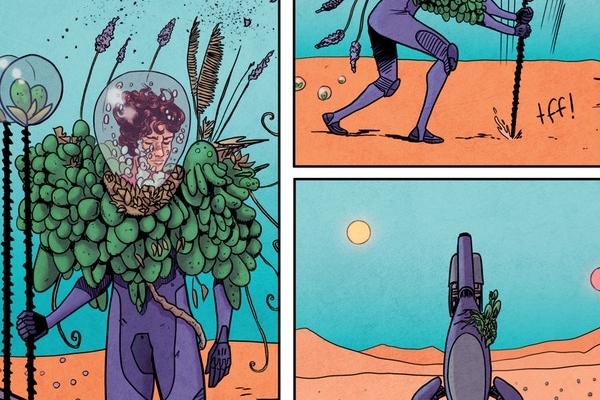 AP2HYC: Why did you want to make another volume of optimistic comics?

Palicki: All We Ever Wanted was originally intended to be a companion to This Nightmare Kills Fascists, our anthology of political horror. Matt and I spent a year curating This Nightmare Kills Fascists and then looked out our front door and saw a real world far more terrifying than what any of our contributors could have imagined. Wanting to shine a light in that darkness gave birth to All We Ever Wanted. Anyway, now it’s 2020 and the world’s still a scary place — perhaps even more so than the world in which we conceived All We Ever Wanted — so there’s a real desire on our part to continue putting focus on the world as it could be rather than as it is.

AP2HYC: What strikes me about All We Ever Wanted is how it emphasises that the path to a better future isn’t an easy or immediate one. Would you agree, and do you hope these comics can educate readers like this?

Palicki: Better doesn’t mean perfect, and aspirational science fiction need not be free from conflict. There are still compelling stories to be told against the backdrop of a “better world,” both in seeing how such a world moves forward and how it came to be, sure.

AP2HYC: Does A Wave Blue World have any other projects in the pipeline?

Tyler Chin-Tanner: Plenty. We’re starting to plan further and further ahead, which means it’s becoming quite a long pipeline. This fall we’ll be releasing the graphic novel adaptation of Phantom of the Opera as well as the 10th anniversary edition of American Terrorist. They’ll be coming out about the same time Maybe Someday will see print. Then in 2021 we’ll be launching our first YA titles, some literary adaptations, a couple more anthologies, as well as sequels to some of our creator-owned projects.

You can discover more about Maybe Someday via its Kickstarter campaign. Have you backed the comic? Let us know in the comments section below or send us a Tweet!