Home » Letters from Midia Combines Clichéd Use of Color, Art and Narration to Tell a Unique Kind of Story

Like puzzle pieces falling jaggedly together, Letters from Midia is a methodical tragedy with a happy ending. It tells the tale of a brave and valiant knight searching for a kidnapped princess. The events unfold before the reader’s eyes with every piece of letter Jason the knight reads. Each letter details how everything so far leads up to his reading of the letter. The letters also leave traces of clues to Princess Midia’s whereabouts for Jason to follow. With art and story done gracefully by Boluwatife Oriowo, Letters from Midia is both enchanting and morbid.

Because of the nature of the premise, the narrative structure of the comic revolves solely around the letters. There is very little dialogue to truly move the plot forward, and exposition is a given. I find that Letters from Midia is a double-edged sword in this respect. The use of letters to dictate previous and upcoming events comes off a little bit unnatural in some parts. At the beginning, the ongoing story seems to be overpowered by the exposition. However, it does work well in other parts of the comic. The descent of Midia’s hope, the crumbling of her faith; we see it all fall apart through the letters. We see this when she shifts from starting her letters with “Dear Jason” to just “Jason”; the way her “forever yours, Midia” becomes just “yours, Midia” to just “Midia”. 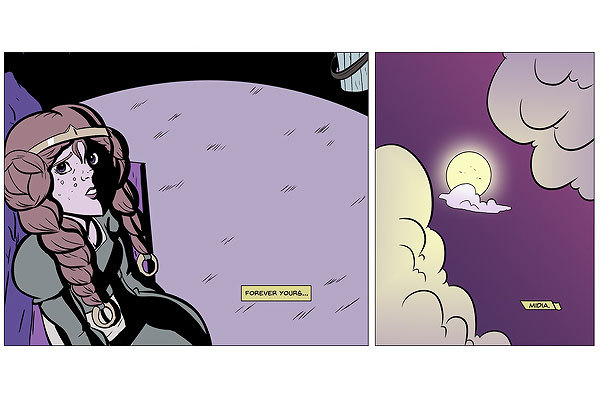 Despite the very little dialogue in the overall comic, its rare use does bear significance. For me specifically, there are three main standout uses of dialogue throughout the entire piece. The first is the way it works alongside art and color to create atmosphere. This is very evident in the scenes of the grand bazaar. From the lively art and collection of panels, multiple character personalities are highlighted in just one page using dialogue. The colloquialism sewn through the text and characters further emphasize this immersion. You can feel the grandeur of business in the marketplace and sense the type of people partaking in it.

The second good use of dialogue for me is the presence of the body collector character. His exuberant and chatty personality is evident in contrast to Jason’s quiet demeanor. His dialogue is tailored to create parallelism and symmetry in the comic’s overall structure; he is the first and last person to point Jason to the direction of Princess Midia. His little exchanges with Jason round up the comic perfectly and frames the overall passage of time. This use of character and dialogue is such a significant factor in the story’s cyclical structure.

And finally, probably the most impactful of all uses of dialogue, or lack thereof, is in Jason’s silence. His continued refusal to sound even a word makes that first time he speaks to Midia all the more important. It carries the weight of his journey, of her burden, and the build-up of the letters. Perhaps the glaring lack of dialogue is what makes that final moment in which he speaks such a success.

The art, for me, is definitely the highlight of the entire comic. Some scenes really just stand out as immersive and fantastic. With a piece so heavily reliant on narration through letters, using art to portray the endless passing of days is key to the storytelling’s success. This is by far some of the best scenes of comic artistry I have ever come across.

The passage of time and places using only pages and panels of art and color is often typical of a technique. It is very hard to pull off without coming across as copped out. That being said, Letters from Midia does it wonderfully well, and one I can get on board with. Furthermore, the combination of this and the narrative structure of the letters creates anticipating build-up towards the climax. The staggering events taking place, Midia’s loss of hope and faith; this is all portrayed so well by the art and narration.

Color is another successful factor in the comic’s storytelling. We see such diverse use of color sewn through the different scenes and sections of the story. There’s the stark vibrant shades of color for past events against brighter and pastel hues of the present time. There are warm tones against paper vibrancy in depicting two different parts of one scene; specifically, the fight against the Avian Alchemists. There’s use of shading in masking both Jason and Midia’s faces. My favorite in particular is how color elucidates the difference in time and place in which Midia wrote the letter, to Jason reading it. 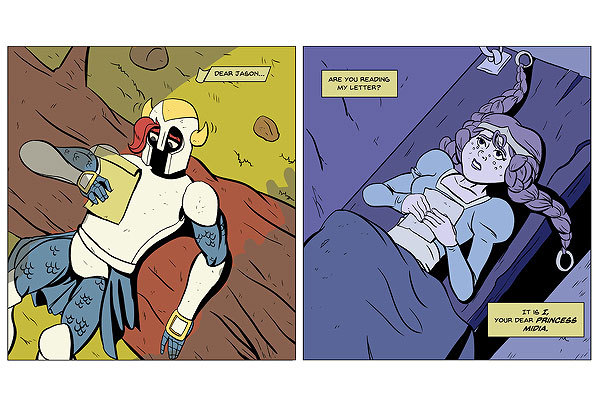 There are endless cases of parallelism that utilizes the simplicity of combining color, art and narration. Furthermore, this perfect blend of the three allows space to seriously explore some morbid and gritty topics. There are clearly deep and horrifying themes that the comic tries to touch on; human and animal experimentation, torture, and non-consensual body modifications. These are all disturbing topics beneath the surface of well-drawn and aesthetically pleasing art. And with such good grips on the combination of color, art and narration, the comic serves very impactful scenes as the one below. 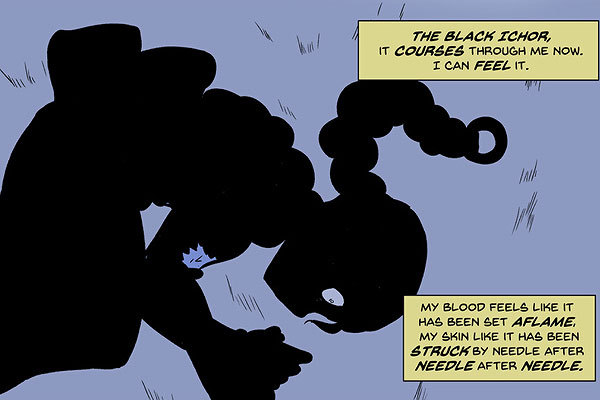 The art and narration work so well together. It combines two very cliché forms of storytelling and does something very clever with it. Use of color enhances this combination and makes for something even more authentic. Despite obvious flaws and clichéd techniques used, Letters from Midia is a powerful piece of graphic marvel. It combines all the different make and aspects of a comic, and does something very unique and amazing with it.

You too can experience the wonderful Letters from Midia. If you like it, sound off in the comments or send us your thoughts on Facebook or Twitter!