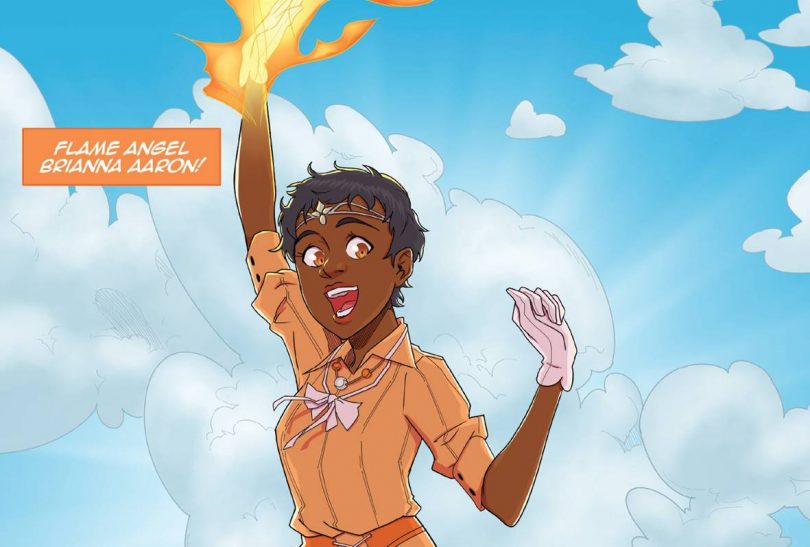 A world at risk! Monsters on the rampage! The only person who can defend us is Brianna Aaron, aka the Flame Angel. Brianna is a young teenager with a heart full of love and hope, wishing to spread friendship and harmony to the world. However, there are a couple of big problems. She is an African-American and happens to live in 1960s Mississippi.

Flame Angel is a magical girl comic quite like no other. Bobby Singer debuts as writer, incorporating a setting new for this particular genre, using themes and topics that are both fundamental and frustrating to the story. Successfully funding his comic’s premiere issue on Kickstarter, Singer gathered his own team of superheroes to bring this comic to life: flatter Roberto Cloma, pencilier and inker “Swain”, colourist Gab Contreras (2000 AD), letterer George Gant (The Reset Button), and cover artist Paris Alleyne (Captain Canuck).

Our heroine is likeable enough, driven by an unquenchable sense of optimism and hope, which is hard for someone like Brianna Aaron in 1960s America. In this alternate world, monsters are drawn to mankind by their hate. The Angels, government-sanctioned magical girls, battle these monsters. The only trouble is that like much of American culture, minorities are segregated, forbidden from becoming heroines. Brianna learns this the hard way when beaten by Arsenal Angel Stella, a white girl, who dresses like a cross between an air cadet and a flight attendant. Stella threatens to kill Brianna if she “pretends” to be an Angel.

As demonstrated very fairly in the panels, that the beastly monsters are the mere effect of mankind’s cruelty. There is more than one definition of monster in this world. This issue serves as Brianna’s origin story, setting the tone of the comic, which lays foundations for a story about overcoming prejudice through the immortal blessings of love and friendship. It is set in a period of extreme segregation and change, and isn’t afraid to tackle such subjects like racism. The problem is that it does not go far enough.

The comic decides to censor its own use of racial slurs, which dampens the serious nature of the themes being discussed. Although such phrases aren’t necessarily needed, it feels a little peculiar to include them in a restrained manner. Other magical girl stories have gone down particularly grim roads and have not held back. Just look at Puella Magi Madoka Magica! Still, the decision to place a magical girl story in 1960s American was a stroke of genius, and we’ll have to see how Singer unfolds this drama.

The visual style of Flame Angel is a plus, with finely detailed panels, setting up each shot with a cinematic flair. At times, the use of close ups for characters are relied on a little too much, but serve well to capture the moods of the characters. Although the story is taking place in a large world, the environments of the comic make it feel quite empty and spacious. This may have been intentional, considering segregation is a large part of the plot. The designs of the characters allude to Japanese manga, but also bring to mind animated series that adapt an anime-style look, like W.I.T.C.H. and Avatar: The Last Airbender.

Flame Angel features some of the expected elements of a magical girl adventure. Brianna gains her own animal sidekick in the form of an orange penguin Benjamin, who leaps out her fridge to form a contract with her. Brianna practically chokes out the little fella with glee. Interestingly, Benjamin appears to personify the powers of Flame Angel, mentioning he lacked a physical body whilst looking for a suitable soul to lend his powers to. Brianna also draws on her magic to create her own battle costume as well.

Our apparent antagonist Stella has some depth to her, avoiding the trap of being a blank racist white character. Her sidekick is the appropriately poisonous frog Sebastian, whose words only fuel Stella’s prejudices and commitment to stopping Brianna. Yet, Stella seems to have no direct spite aimed at Brianna, implied to be under a lot of pressure from her family and sponsors. Even the mean frog, who comes off as racist, has his own reasoning for why Brianna shouldn’t be an angel. I applaud Bobby Singer for ensuring the characters are complex, and by not just placing them into boxes, allows them to be fleshed out better, and represents his talent for writing.

Flame Angel could be the start of something rather special and brilliant. Bobby Singer dedicated the issue to his late father David, who he credits as the inspiration for his love for comics.

You can find more information about Flame Angel on its Gumroad store. Be sure to give it a read, and leave your own comments below or on our Twitter feed.