Especially given today’s climate, there are days when you just need a good pick-me-up comic to coddle you and tell you everything is going to be okay. Milford Green is just that. Set in 1897 England, Milford Green is a standard vanilla space adventure that lacks enough risks to make it completely engaging.

Perhaps the biggest flaw of this comic is the art. The art is some of the most gorgeous art you will ever see. Mikael Hankonen‘s colours, environments, and character designs evoke a classic Studio Ghibli film. From the first panel, you’ll absolutely fall in love with the art style and if you don’t then there is clearly something very wrong with you.

However, this luscious art ultimately becomes a problem as the story progresses. Because it’s so beautiful and because it will immediately remind readers of Hayao Miyazaki‘s work, the immediate expectation is this comic will follow the same type of story Studio Ghibli films usually follow, one full of magic and wonder. Even one of the first lines of the comic refers to the main character thinking about faeries, his head always up in the clouds. As Milford Green progresses, however, it becomes clear that this is a space adventure. Readers’ preconceived notions that the art evokes will no doubt cause them to be let down once they discover what kind of story this is. It is a disappointment, to say the least. 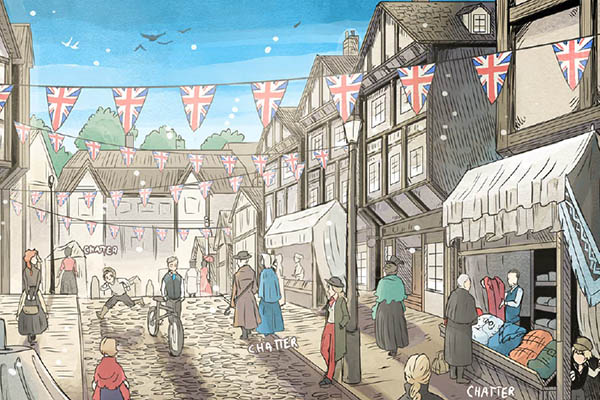 Unfortunately, the story itself is unable to save Milford Green from this dilemma of unintentional juxtaposition. Readers follow Alfie, an inquisitive young man who comes across a dying alien that was on an undercover mission to reclaim a lost power source for an intergalactic council. With the help of his long time crush, Mary and her father, the trio attempt to fulfill the alien’s mission while also defending their home Milford Green from the enemies’ attack.

Samuel George London has created a decent story and characters to start with. However, these characters and story simply don’t go far enough. Alfie and Mary’s relationship undergo minor hurdles in the beginning of the comic but once the first issue is over, their relationship suffers little to no consequences, stakes, etc. The lack of development between the two main characters simply becomes boring. Smoother dialogue between characters might have helped this as the two also sound too similar from one another.

Overall, Milford Green is a fine read if you’re looking for something that is beautiful and tells a very low stakes space adventure. But if you want something more, with true conflict and themes, then this is not for you. Simply put, this story is for when you need to feel better about the world, when you need to be told that everything works out in the end and peace can exist. I have no doubt that this duo can create a great story, their talents would just probably be better suited in a different genre.

You can learn more about Milford Green through Signal Comics’ website! Have you had the chance to read this space adventure? Let us know in the comments below or send us your thoughts on Twitter!