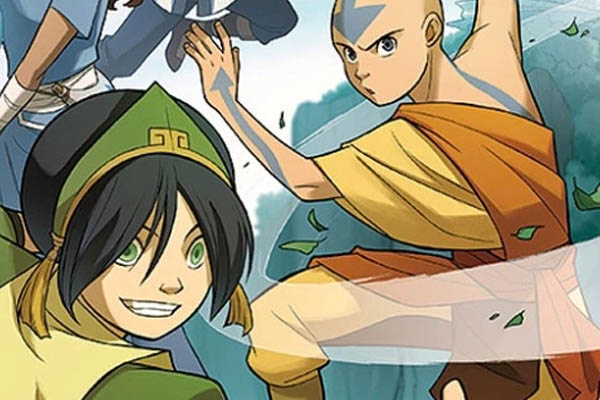 After a rocky start, it was starting to look as though these Avatar the Last Airbender comics were complete duds. However, there appears to be a faint light at the end of the tunnel with Gene Yang‘s The Rift.

Set after the events of The Promise and The Search, Yu Dao has elected its first, new coalition government. During the celebration, Aang begins seeing cryptic visions of Avatar Yangchen where she appears unable to speak to him. In order to learn more, Aang brings Katara, Sokka, Toph, and a few Air Acolytes to the site of the Yangchen Festival only to discover a refinery now rests in a once peaceful meadow. It’s up to the Gaang to solve the mystery behind Yangchen’s messages and what secrets the refinery might hold.

Unlike the previous installments, there’s a lot going for this comic. For one, it continues the conflict of industrialisation and progression vs. nature and spiritualism that was built up in The Promise and The Legend of Korra. And it does so through the conflict between Aang, the traditionalist, and Toph, the progressive. Because Toph was able to create metalbending in the series, has since developed her own school, and is one from higher society, it completely makes sense that she would be the one who is in favour of continuing to build the future. Their conflict doesn’t feel forced like other conflicts we’ve seen in this comic series.

Additionally, The Rift expands and concludes a conflict from the series between Toph and her family. In particular, the relationship between her and her father really shines in this book. It’s given just enough time become a fully fleshed out story with a neat conclusion.

And that’s really the advantage of this comic compared to its predecessors: it doesn’t try to throw so much at its audience that its core themes get muddled. Like any Avatar story, everything is connected and doesn’t feel arbitrary in the slightest. Each panel, each story beat, each conflict has a purpose in serving the narrative. It feels like a cohesive whole and this is by far what makes this comic superior to its predecessors. And because it is put together so much better, it’s easier to appreciate the smaller details sprinkled throughout the panels such as the gorgeous costume designs for all the characters at the beginning of the comic.

Overall, if you find yourself needing more Avatar the Last Airbender content, The Rift will definitely satisfy your needs. Of course like every form of media, this comic isn’t perfect but it sure as hell beats The Promise and The Search. Only time will tell if the comics can keep up the improved storytelling.

You can purchase a copy of The Rift from your local bookstore or online. What did you think of The Rift? Do you think it’s the best Avatar comic so far? Let us know in the comments section below or send us your thoughts on Twitter!