Home » Spry and Flirtatious, Isadora Is as Light-Footed as Its Subject Matter

There’s a certain subdued atmosphere to sequential biographies published by SelfMadeHero, specifically those that focus on artistic individuals. Behind The Curtain and An Olympic Dream may be particularly uncompromising, but titles from SelfMadeHero’s Art Masters series, biographies of acclaimed artists, tend to ride on the popular perception of these artists, rather than prize deeply into the individuals themselves. Beyond the Art Masters, Isadora reads like a spiritual sequel to Josephine Baker, that other dancer engrained on pop culture’s psyche whose life is now committed in comic form. Isadora captures the life of the American dancer who was dubbed the Mother of Modern Dance, rejecting formal dancing techniques in favour of a much more personal, experimental style. Captivating audiences, her personal life was as free-flowing as she was on stage, embroiled in romances, homelessness and a general disdain for the trappings of regular society.

Julie Birmant and Clement Oubrerie craft a reasonably light-hearted biography of the infamous dancer. The hand-drawn panels and select usage of colour reflect the spontaneous flavour of the comic, itself a reflection of the impulsive nature of the comic’s subject matter. Birmant’s artwork is quick, yet unhurried. It isn’t rushed and yet it barely pauses for breath. There’s an enjoyable nimbleness in how expressive Oubrerie’s line art is, with each and every character exuding a visual distinctiveness. At odds with this playfulness is the selective use of colour. Throughout Isadora, colours are murky and muted, with a layer added on top as if to inject some form of serious elegance into the otherwise whimsical story. The most lacking in personality and punch is the lettering. Whilst clear and consistent throughout, it doesn’t have as much character as other elements of Idsadora and comes off as an afterthought. 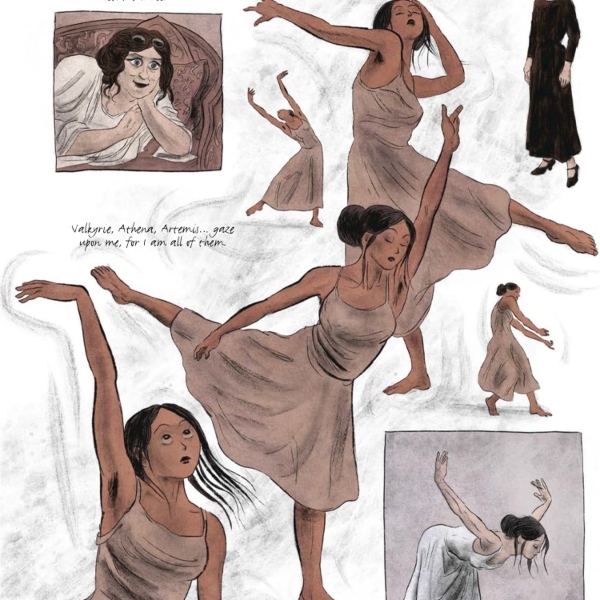 Birmant’s slick, graceful story-telling spans Isadora’s life and career from 1899 to 1925. The narrative structure is an effective and engaging translation of Duncan’s unpredictable lifestyle from reality into sequential form, but it ultimately retreads the same ground as past SelfMadeHero biographies, rather than attempting to walk its own path. It’s no coincidence that the inside back cover to Isadora promotes Josephine Baker. The two comics march to the exact same narrative beats, the same jovial approach to the artwork. Despite fitting all the criteria for a SelfMadeHero biography, Isadora is in fact an English translation of the comic’s original edition, published in 2017 by Dargaud, and not an original title from SelfMadeHero.

Reading Isadora in the context of having read past biographical works from the publisher, it’s entirely understandable why SelfMadeHero would want to bring Isadora under their wing. It matches all of the aesthetics SelfMadeHero often incorporate into their own works, to the point where it doesn’t quite manage to offer anything new. Isadora is a pleasant, easy-going, quietly eccentric affair. As a celebration of the dancer herself, it’s a heartfelt celebration from creators who clearly have a great deal of passion and respect for their subject matter. As an additional feather in SelfMadeHero’s cap of comic book biographies, it could do with being more distinctive than their other, more creatively successful publications.

You can discover more about Isadora from SelfMadeHero. Has this comic danced its way into your life already? Let us know in the comments section below or send us a Tweet!