Sentient has won over fans as the standout title of TKO Studios’ second wave of comics, its mixture of childhood innocence against a dark, cosmic backdrop striking a chord with readers and critics alike. However, coming in at a very close second-best in terms of creative success of TKO’s second batch of comics is Roxane Gay, Ming Doyle, Jordie Bellaire and Ariana Maher‘s The Banks, a slick crime thriller with themes of class structure and racial prejudice coursing through its sequential veins.

Within The Banks, three generations of black women struggle to navigate their relationships within the world of crime. Grandmother Clara Banks and mother Cora formed the most successful theft outfit in Chicago with their tight operation and moralistic justification – rob who deserves to be robbed, and don’t get greedy. All of that grinds to a halt as time passes and youngest Banks member Celia opts for the world of corporate business rather than the family business. Stumbling upon the heist of a lifetime within her own corporate world draws Celia back into her mother and grandmother’s lifestyle, as the trio cautiously put the crime of the century into action. Narratively, The Banks‘ greatest strengths comes in its balance of slow-burning heist and family drama, with the trio of Banks ladies not entirely trusting of each other. 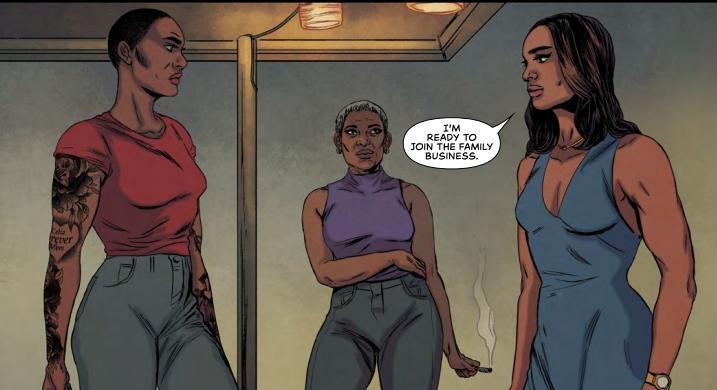 Gay packs in plenty of character-driven dynamics to keep the quiet, unhurried momentum of the comic enjoyably steady from the first to the last chapter. Eldest Banks member Clara sneers upon her granddaughter’s choice of lifestyle, with Cora caught in the middle attempting to appease both sides. What’s less well defined is Doyle’s artwork. Whilst her depictions of the three Banks ladies are distinctive and characterful, her attention to detail elsewhere is underwhelming. To be blunt, there isn’t much detail elsewhere at all. The world of The Banks appears generic, without personality to compliment its tight themes. Bellaire’s colours are more convincing, but not entirely engrossing. It’s as if they struggle to commit to Doyle’s disappointing line art.

What does work in making the art and story join hands is the visual focus of The Banks. Throughout the comic, we’re given sharp close-ups of the three generations of Banks, enabling Doyle to concentrate on where she’s clearly most invested in the comic. Her attention to detail in the physical attributes of Celia, Cora and Clara, with their differing ages, reflect the layered perspectives of the comic’s core trio of characters. There’s a very fluid motion to her characters that makes the drama of the story all the more palpable. It’s all the more of a letdown that so much of the rest of the art feels like an afterthought. Amidst this uneven execution of the art however, Maher’s lettering is consistently sharp, simple and clean.

The Banks is less cohesive than it means to be. Whilst the characters of this comic burst with visual life, just about everything else doesn’t. The comic’s muscular thematic delivery and un-rushed story-telling help to make it an absorbing read that may lack the immediacy of Sentient, but succeeds in being a stern, well-told character drama. The Banks could have been fantastic, and still ultimately stands as a solid addition to TKO’s line-up, but it just falls short.

You can discover more about The Banks from TKO. Have you already read the comic? Let us know in the comments section below or send us a Tweet!