Home » The First Pages of Hell in Stalingrad are Black, White and Bloodshed

Bringing Hell to Stalingrad seems to be splitting hairs: what threat do demons and the occult really have in such a devastated battlefield as in the Second World War? We have previewed the first twenty pages of the Kickstarter graphic novel from Mad Robot Comics and Madius Comics’ Hell in Stalingrad, the opening pages of which do a good job at setting the scene while introducing the book’s unique threat.

It remains the norm, or the expectation, to see material about WWII rendered in black and white. However, the filter over Stalingrad in these twenty pages has a different texture; it’s full of rough, sketchy lines and shading – although its busy layers are still clear to the eye. The alacrity in Russell MacEwan’s art comes from these clear layers, separated by thick borders, almost like a collage. These layers outline clear foregrounds and backgrounds: establishing the scene and sides of Stalingrad before introducing the more rogue elements of the narrative.

The story has a unique flow, in that twenty pages in, there are never more than two panels on a page. Almost every page is divided in two horizontally. This consistency is rhythmic, and the simple layout is appreciated when darting around the chaos of the battlefield. This also gives momentum to dense sequences of conversation.

The reader is guided through each panel by Rob Jones and Matt Hardy’s dialogue, which hits the ground running with a familiar tone of a WWII story. Keeping to the bare minimum of panels to a page means denser speech bubbles come through in a quicker and more natural rhythm. In turn, this dialogue makes the reader linger with each panel, and recognise the smaller felicities of characters’ warped or obscured expressions. Hidden in opaque shadow or dissolving into their busy surroundings, the characters in Stalingrad benefit from the reader taking that second to pause on their faces and reactions. The story of Hell in Stalingrad will focus on soldiers from both sides of the conflict, humanised and divorced from the larger battle, so this emotion is essential. 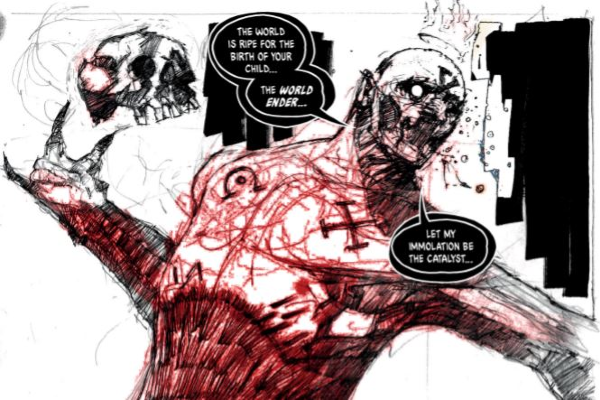 The occasional splash page in the book has all the more impact because of this consistency in the layout otherwise. The best example of this is at the conclusion of these twenty pages, when we see the threat of the story, the introduction of the occult. A possessed, decrepit brute, laced with red symbols and stains up their arms, approaches a team of terrified soldiers in a hallway. This is the first shot of colour in the book, but this isn’t even the splash page. This figure’s introduction is slow and threatening, that is, until they are blasted with bullets and their head explodes. That’s a splash page.

You can compare this to how Hell in Stalingrad depicts a headshot on the battlefield ten pages before: a soldier is hit, but with no colour, no blood, just like he’s just been socked in the face. He’s in the background while another soldier beside him has already said they should move on, leave him, before he’s hit the ground.

There’s no ceremony for death in the battlefield of Stalingrad, so this creature’s appearance is the first time death seems grisly and actually threatening. Its attack is a trespass on the style the comic established before, and on the depiction of Stalingrad that’s probably already familiar to a lot of readers. This anachronistic horror makes Stalingrad colourful and twisted and brutal, and after these twenty pages we’re curious to see where the story’s taken next.

Has Hell in Stalingrad piqued your interest? Sound off in the comments or send us your thoughts on Facebook or Twitter!