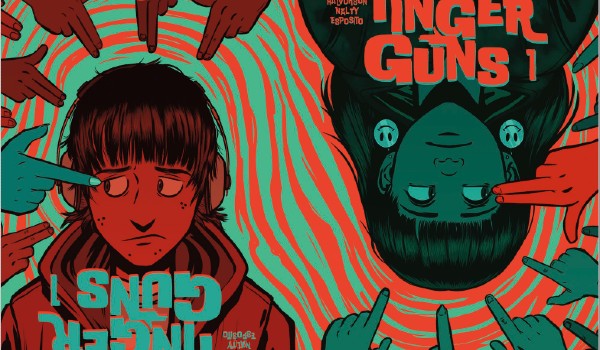 Finger Guns #1 by  Justin Richards and Val Halveston presents the story of two teenagers discovering that they have the ability to affect the emotions of other people by using their “finger guns”. Finger Guns is essentially a story of troubled young adults dealing with a sudden change in their life, and learning what they should do with their newfound power. It is a book seemingly designed, from both concept and presentation, to appeal to a young teenage reader, especially one who is just getting into comics. So just how well does Finger Guns #1 succeed at beginning this story?

Finger Guns begins with Wes, a teenager currently struggling with feelings of loneliness and of being an outsider. While strolling in the mall, Wes accidentally finds that he has the ability to cause others to become hyper aggressive for short bursts by “shooting” them with his finger gun. Shenanigans ensue as Wes plays around with his new powers. That is until he is met by Sadie, a classmate who uses her finger gun to pacify others. Wes and Sadie continue to explore their powers, with Sadie testing hers on Wes. Through this, Wes finds out how awful it feels to be controlled. The two part ways, with Wes feeling distinctly less glum than in the beginning of the issue. The comic ends with a cliffhanger. 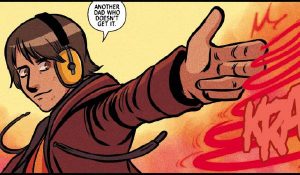 The premise of Finger Guns is fantastic. The idea of these two teenagers having the ability to affect emotions in such a way will be certainly make for an entertaining and touching story. As far as this first issue goes, it acts as a decent opening to the series. The beginning of the story where Wes and his problems are introduced feels rather played-out, but moves at a brisk pace. When Wes gets his powers the story becomes more fun, with some humorous interactions with Wes and the victims of his finger gun. The interactions between Wes and Sadie follow this same dynamic, until it gets a bit more somber and reflective as they test their powers. This was much appreciated.

Richards does a good job making the story feel grounded, with the dialogue being realistic, and Wes and Sadie acting like how teenagers would in their situation. This issue really has no conflict until the very end, as it is pretty much all set up, making the issue enjoyable, but not incredibly compelling. From what this book does set up and hint at, though, the following issues will likely be quite the ride.

The art in this issue is, in both layout and style, rather simple. This simplicity makes it very easy to read, and therefore perfect for a new reader. The panel grid layouts are all fairly standard and easy to follow. The faces are all basic, possessing larger eyes and minimal features, which allows them to be very expressive. Emotions in this story are very important, and Halveston’s characters are able to display both exaggerated and nuanced expressions very well.

The characters themselves have simple, but distinct designs that are able to show off their personality. The general framing of scenes is again rather basic; while it is able to express a character’s feeling fairly well, it is not incredibly dynamic. The art in general doesn’t tend to go with more stylized or bombastic expressions and movement, which allows the story to have a more realistic feeling.

The coloring, done by Rebecca Nalty, also aids in this realism, rendering the world in simple tones, which keeps the art feeling grounded. Brighter and more vivid colors are used occasionally in gradient backgrounds, to further express the emotion of characters in a scene. Overall the art is effective and appealing, and while not terribly exciting, its simplicity and realism works as a strength for this type of story.

Finger Guns #1 by Richards and Halveston brings on a very unique idea, and are able to flesh out an interesting pair of protagonists. Issue one is fairly successful at setting up this storyline, if not a bit unexciting itself. However, it will be interesting to see how the series unfolds from here. The story and art makes this a perfect read for someone in their early teens who is just starting to get into comics. You can purchase this book from Comixology right here.

Will you read Finger Guns #1, and if so, what did you think? Sound off in the comments or send us your thoughts on Facebook or Twitter!