Home » “Godzilla: Gangsters and Goliaths” Is A Crime Thriller Of Kaiju-Sized Proportions

There’s a lot to love about the kaiju genre of films and comics. The action and the destruction, the horror and the fun. And of course, the giant monsters themselves. However, human characters and their stories have historically never been the strengths of most kaiju films, usually seen merely as distractions or just excuses for a plot to happen. Speaking from experience, I know fans of these types of stories can get frustrated when the monsters are reduced to background set pieces in favor of a standard, uninteresting, human-focused sci-fi plot.

However, Godzilla: Gangsters and Goliaths, a 2011 5-part miniseries/graphic novel from IDW, doesn’t suffer from this problem. This is because it embraces a lesser talked about aspect of the kaiju subgenre: its versatility. Writer John Layman and artist Alberto Ponticelli take the basics of a standard Godzilla story and mash them together with a gritty, noir “cop vs gangster” action thriller, and the results are about as awesome as they sound. Not only is the human story very compelling, it is elevated by the presence of the monsters. If one were to separate the crime story and the kaiju story of Gangsters and Goliaths from each other, I doubt either one would stand out as anything particularly special. The strength of the story, however, is evident when you realize just how hard it would be to actually do that. Gangsters and Goliaths really lives up to its name, as it succeeds to an incredible degree at combining these genres, creating something that is greater than the sum of its parts.

The world of Gangsters and Goliaths doesn’t seem to contain itself to any of the specific Toho film eras of Godzilla, though it is most reminiscent of the very popular Heisei Era of the 80s and 90s. Monsters from all over the Godzilla canon make appearances, and in this world, the existence of the kaiju and Monster Island are well established. They are simply a fact of life, though still a very threatening and dangerous fact. This works especially well here both for fans who are already familiar with the Godzilla universe and for the story Gangsters is telling. Most kaiju stories center around merely trying to stop or survive a new monster attack/battle, usually from the perspective of the military or civilians, and that isn’t the case here, at least not right away. 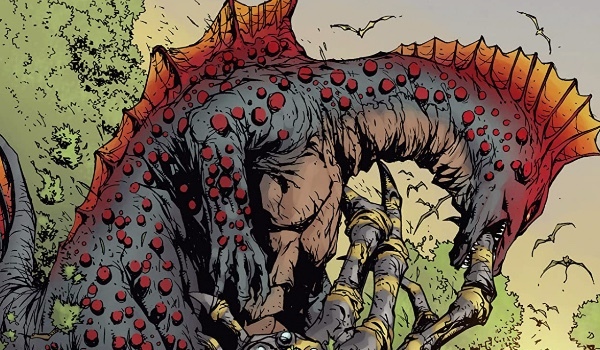 The main character and overall focus of the comic is Tokyo Detective Makoto Sato. He’s a gruff, righteous lone-wolf cop who cares about his city and doesn’t take kindly to crime and corruption, even when his peers do. This stubbornness, by the story’s start, has already gotten him into a lot of trouble with a gang called the Takahashi Crime Syndicate, who now wants him dead.

Sato’s character is a fairly common archetype in cop and crime genres, but like so much of this comic, it is elevated by his presence in this world of giant monsters. After escaping a crew of gangsters on Monster Island, Sato becomes resolute in his mission to take down Takahashi, the biggest of the Tokyo crime lords. There he comes in contact with Mothra and her guardians, and in what might be the coolest aspect of the whole comic, forms a shaky pseudo-alliance with the Queen of the Monsters herself. Sato proceeds to effectively declare war on the crime families of Tokyo, and his crusade and the fallout of his actions on himself and the city are thrilling to see.

I will say that the final act of this comic did disappoint me somewhat, if only because it becomes a much more stereotypical monster-apocalypse type scenario as opposed to a more contained adventure. Of course, there’s still a lot to enjoy there, and because I was already so invested in the characters by this point it truly didn’t bother me all that much. The journey of Sato’s character, backed up by lots of fun, devastating kaiju set pieces, is both emotionally engaging and a genuinely tense ride, and I found the ending itself to be surprisingly satisfying.

The artwork draws a very nice balance between the gritty crime aspects and the colorful kaiju, never really having either detract from the other. The monsters, as well as the destruction they create, are beautifully drawn, with tons of great panels that show off their size and power. The story, while a little predictable and cheesy from time to time, works for what it is just because of how it manages to do something different with the kaiju and noir-crime formulas. All in all, I think this comic shows just how many unique ways there are to tell stories about giant monsters, without losing any of what makes the genre so beloved and so fun. I’d recommend you give it a read.

Have you read Gangsters and Goliaths, and do you have a personal favorite Godzilla comic? Sound off in the comments or send us your thoughts on Twitter!