Home » Lifeformed Is a Sci-Fi Story About Resilience 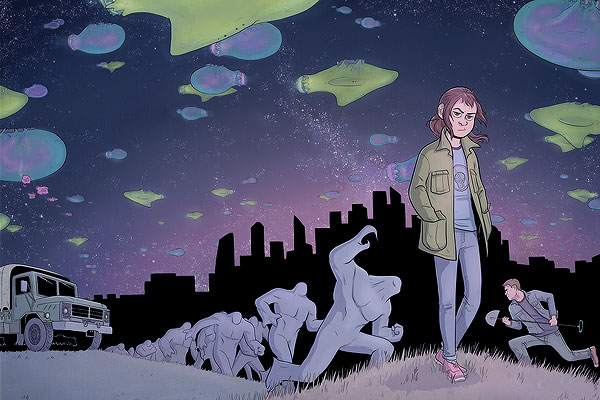 Who is the most badass character you can think of? How do you imagine them to be? Tall, strong men? What about an 11 year-old-kid who has to deal with an alien invasion? This is exactly what Lifeformed is about; a badass kid who has to grow up quickly – too quickly – in order to fight a bunch of alien invaders! Written by Matt Mair Lowery and drawn and lettered by Cassie Anderson, this graphic novel is a refreshing new take on growth and adaptability. In this review I’m going to talk about the 1st and 2nd issues of the series.

Lifeformed #1: Cleo Makes Contact begins by introducing 11-years-old Cleo, and her dad.  They have a regular life and Cleo is pretty typical for a kid her age. Everything changes when aliens invade the Earth. Cleo’s dad dies, but an alien that looks just like him rescues her. She and her new alien guardian Alex fight for their survival. Lifeformed #2: Hearts and Minds sees a mysterious character stalking Cleo. Alex is also having a bizarre time. He can remember all of this other man’s past memories, to the point he sometimes thinks he’s Cleo’s father.

Lifeformed is a sci-fi story for all ages. The story is fun and action heavy, and an excellent piece of work. I like the exemplary and detailed approach the writers take in the storytelling and character dynamics. I really appreciate how they take the time not to tell us, but show us what Cleo and her dad’s relationship was like before his death. Comics and graphic novels are on paper, but they are not that different from other visual mediums; the only thing that changes is that comics are static. I notice that in a lot of graphic novels, there is a tendency to not use art to show how important certain characters are. Instead, they use dialogue. 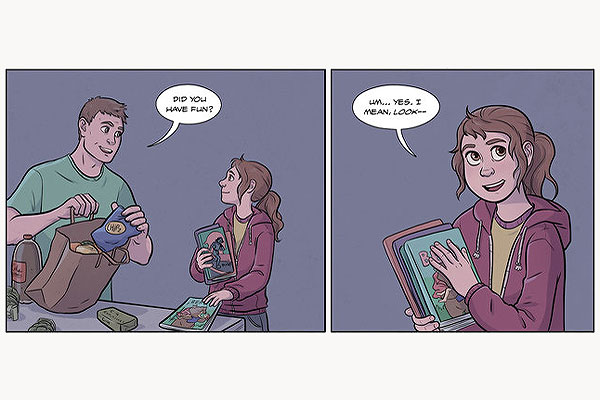 Dialogue in visual mediums is not an effective way to express the affection characters feel for each other. This is because dialogue is not nearly as powerful as the chance to see with your own eyes these relationships. Dialogue should always be sparse, unless we’re dealing with a stage play or radio play. On the contrary, Lifeformed tries to make it clear by having their protagonists show how important they are to them. An excellent way to prevent writing too much dialogue in comics is to add context clues in the art or by using visual flashbacks.

The creators have a refined understanding of how visual storytelling works. I felt heartbroken when Cleo’s dad died because they didn’t just assume the audience would feel automatically sympathetic towards an orphaned character. Instead, they created the opportunity for the readers to feel real empathy towards Cleo. Apart from Cleo’s loss, dialogue was scarce, favouring visual storytelling for the entirety of both novels, and I couldn’t be more pleased about it.

The characters have strong, distinctive personalities. Cleo is a child who has to grow up very quickly. Nonetheless, she maintains that childlike stubbornness and crave for fun that distinguishes kids from many – too many – adults. This story is about resilience and adaptability. In fact, the characters that survive are those that accept change. On the other hand, the characters that succumb are those whose hamartia is the inability to change and adapt.

Liformed is definitely diverse in terms of characters. For instance, Ayesha is a muslim woman. It’s good to see how religion does not represent negative or positive connotations, but act as part of the character’s multifaceted identity. Another example is Emily, a black woman that used to babysit Cleo. Cleo realises she needs to change thanks to Emily. In Joseph Campbell‘s Hero’s Journey story structure, this is the ‘Meeting with the Mentor’ moment. It represents the protagonist’s opportunity to accept and carry out their adventure through the help of a secondary character.

It’s probably a coincidence that Emily as a character is a black woman. However, this video essay by The Take on YouTube explains that there is an enduring character trope of black characters who possess a special insight. These characters often exist in the story only to help the white protagonist realise something about themselves. They therefore are then able to proceed on their journey. However, these minor details make us realise the problematic ways certain groups of people appear in media.

It’s detrimental because we add these characters thinking we are being inclusive, while on a subconscious level we are reinforcing and perpetrating biases that the vast majority of readers already have. In Emily’s case, it shows her life is no more useful now that she has helped Cleo and therefore fulfilled her duty; the reader can grow more desensitised at the idea of people of colour dying easily if it happens so often in the media. As I stated before, it is probably a coincidence Emily is a person of colour, but it is important for authors to be mindful about these extremely important minor details.

The artwork portrays a colourist with a good sense of balance. The colour ranges are nice and soothing. The characters’ faces are expressive and communicate emotion well. On the other hand, most images show a lack of depth. Not all comic books should have depth in their images, but here it seems to be too much of a lack. In addition, the figures are drawn stiff and laboured, often with small but bizarre anatomical distortions. It gives me the impression the images were drawn too quickly. I think adding some crosshatching and shadowing could have helped the quality of the images.

In conclusion, I would recommend reading Lifeformed series. It is a high quality, entertaining story. I do enjoy some action and sci-fi from time to time, and the creators nailed this project. The artwork needs a little bit of improvement, but it’s overall a good series.

You can take a look at where to purchase Lifeformed here or buy the first volume on Amazon. If you like it, sound off in the comments or send us your thoughts on Facebook or Twitter!