Home » The War-Torn Wasteland of Oz: In Conversation with David Pepose, Writer of The O.Z. 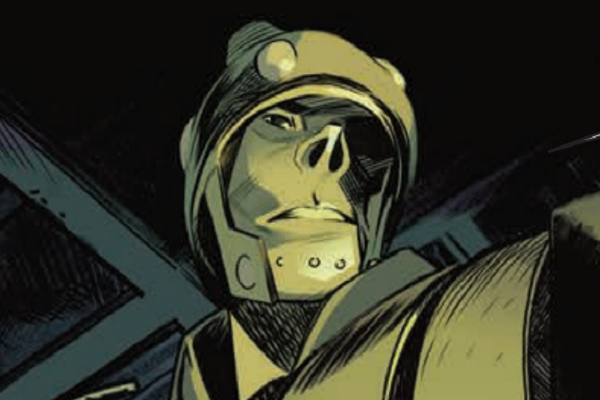 You probably don’t remember the first time you heard it, but you definitely know the story. The Wizard of Oz has been readapted dozens of times over since L. Frank Baum’s original book and the 1939 film. Indeed, the fantasy world of Oz is timeless: otherworldly and archetypal. But what if it wasn’t? What if Oz ‘grew up’? What if Dorothy grew old? That is one of the first questions poised by The O.Z.

The O.Z. is a reinvention and a sequel to the Wizard of Oz mythology which you can support now on Kickstarter.

You might know series writer David Pepose from his Calvin & Hobbes inspired comic noir Spencer & Locke, or Going to the Chapel last year.

We caught up with Pepose to hear more about The O.Z. and its ravaged version of the land of Oz.

A Place To Hang Your Cape: The O.Z. looks to be its own story, as much about a soldier as it is a reimagining of The Wizard of Oz. Which idea came first, and was it easy to combine the two?

David Pepose: For those who don’t know what The O.Z. is about, our story is like what if Mad Max and The Hurt Locker took place in the Wizard of Oz. Our story reimagines Dorothy Gale killing the Wicked Witch of the West as a botched regime change — and when Dorothy returned home to Kansas, she inadvertently left Oz in the throes of a horrific power vacuum.

The O.Z. picks up a generation later with Dorothy’s granddaughter and namesake, a disillusioned Iraq war veteran, as she’s dropped into this magical battlefield. Forced to navigate her past and her grandmother’s former friends, our new Dorothy will have to use every bit of her military training to survive the Occupied Zone… or as the locals call it, The O.Z.

As far as where the idea came from, it was almost simultaneous — I had been writing down inspirations for fantasy, including Tolkien, Lloyd Alexander, Piers Anthony, and the Wizard of Oz. It was when I saw the word “Oz” in front of me that I thought about it as an acronym, like the DMZ — or in this case, the Occupied Zone. That image of a war-torn Oz crystallized almost immediately in my head, and I knew I had to pursue that story further. It was just irresistible.

AP2HYC: What can you tell us about our new Dorothy?

Pepose: Dorothy Gale is actually the granddaughter of the original Dorothy who killed the Wicked Witch back in L. Frank Baum’s The Wizard of Oz. But unlike her wide-eyed and innocent grandmother, our new Dorothy is an Army veteran who served in Iraq and Afghanistan, and she’s carried some real trauma back with her. Of course, when she’s swept up by a tornado and dropped into the war-torn land of Oz, Dorothy’s going to realize her grandmother’s tall tales aren’t quite as rosy as she might have believed — over the generation since we last saw our heroes, the nation of Oz has fallen prey to civil war and a truly ruthless regime.

I’ve really enjoyed writing Dorothy as a character, because I think she builds upon a lot of the themes of trauma and guilt from my previous work in Spencer & Locke and Going to the Chapel, but expands the scope of her journey while raising the stakes accordingly. Dorothy will have to confront her past if she hopes to bring peace to The O.Z. — but she’s also grappling with the weight of responsibility, given her grandmother’s near-saintly reputation across Oz. There’s a real moral calculus to war that Dorothy has to reckon with — how do you make an ethical decision, when every choice you make could wind up with someone’s blood on your hands?

The other way that I think Dorothy really drives The O.Z. narratively is the way she sees the world — not just her struggles with being a political leader as well as a soldier, but also just her military training. Oz is a place of dangerous wild magic now, and Dorothy absolutely sees that as a weapon to defend herself and others. The other side of the rainbow has teeth, and seeing how Dorothy interprets that — think the Wizard of Oz’s balloon used for a HALO jump — and you’ll see how exciting this kind of fantasy/war mashup can get.

AP2HYC: How did you approach writing characters who also appeared in the original story — if they even are the same characters?

Pepose: Honestly, that might be the most fun part of the process for me. The Wizard of Oz was populated with such archetypal characters, which gave me a lot of flexibility in how to interpret them — you could either take a hard left turn to reinvent them, or you could take one of their core characteristics and follow it to the logical extreme.

The Tin Soldier, for example, has been destroyed and rebuilt so many times that he’s become this towering war machine made out of whatever metal is lying around. Yet he’s also the guy who wanted a heart — so what happens to him when he’s spent years in combat, watching his fellow freedom fighters die?

The Scarecrow is another fun character, one who has a really complex arc — I think readers’ relationship with the character is going to evolve a lot between our first and last issue. He’s the one who wanted intelligence — but that can be a real monkey’s paw situation. Sometimes being the smartest person in the room isn’t enough — that just means that sometimes you’re the only one who sees the horrors all around you, and that can mess you up in a big way.

While we won’t see him much in this first issue, I really enjoyed writing the Cowardly Lion, as well. He’s got an arc that I think Dorothy can truly empathize with — on the one hand, his story is about legacy, about living up to those lofty standards of the past. But the Lion also wanted courage — it’s one thing to have courage when you’re just fighting for yourself, but how does that calculus change when you’re the leader of an entire kingdom?

We’ll also cherry-pick a bit across the greater Oz mythology, with characters like Jack Pumpkinhead and the Nome King eventually showing up… not to mention the Wizard of Oz himself. Mark my words, I think he might be a fan-favorite character after this first issue…

AP2HYC: What is the appeal in reimagining a story as iconic as The Wizard of Oz? Is there anything you tried to avoid?

Pepose: For me, there were only two things I wanted to avoid with this series — the first thing was just overloading people with mythology that they might not recognize, so keeping this story closer to the original Oz novel, which most people know from the Judy Garland film. The other thing was just making sure we never were creating something for simply the sake of shock value — shock might get your foot in the door once, but that’s not going to keep people invested.

But beyond that, I honestly had a blast getting to reimagine this world. The land of Oz reminds me a lot of Star Wars, in the fact that it’s got such a wide amount of settings, each with its own unique vibe and palette — just like George Lucas had Hoth, Tatooine and Endor, we’ve got the Deadly Desert, the land of Ix, and the Wicked Witch’s castle. I actually wrote a term paper in college about Oz as sort of a prototypical superhero universe — Baum was building upon continuity across 20 books decades before the Justice League ever existed!

AP2HYC: Can you tell us a bit about the creative team on The O.Z.?

Pepose: I’m working with a murderer’s row of talent on this book. Artist Ruben Rojas is one of the most talented people I’ve ever had the fortune of working with. He’s got this amazing sensibility that lets him juggle action and drama seemingly effortlessly — except I know firsthand just how hard he works. He’s also an incredibly gifted designer, both in terms of settings and in terms of our actual characters — when I saw his first cover with Dorothy and the Tin Soldier, I told Ruben right then and there to keep drawing. I told him that come Hell or high water, I would get this book made, no matter what. His artwork is just that good.

Whitney Cogar, meanwhile, is our secret weapon for this book. I got my start in comics as a DC Comics intern, and the lesson they really impressed on me was this — if art makes or breaks a comic, then colors make or break your art. The wrong colorist can tank even the strongest linework, but the right colorist can turn your book into a home run. And that’s what Whitney does, page after page — just non-stop home runs. She and I talked a lot about Mad Max and Star Wars for this series, about being able to maintain that level of grit while still recalling the magic and wonderment of even a war-torn Oz. This book wouldn’t look half as good without Whitney’s sterling contributions, and I couldn’t be more grateful to be working with her.

DC Hopkins rounds out our team, and he’s honestly one of the most straight-up gracious and good-hearted dudes I’ve ever met in the business. He and I met back at Denver Comic Con a year or so back, and even then I knew he would be a consummate team player, and a much-needed center of calm amidst the craziness of comic book and Kickstarter production. Dave and I talk a lot about the relationship between our word balloons and our art, and he’s incredibly patient with me when I realize I’ve overwritten and need to cut half a balloon.

Finally, we’ve got a murderer’s row of talent on variant covers for this book, including Maan House’s “Death From Above” cover featuring a killer Winged Monkey; Rio Burton’s “Apocalypse OZ” cover, capturing the movie poster version of our book; and last but not least, Kenneth Wagnon’s superlative Akira-inspired “Hit-and-Run” cover. Honestly, between the three of them and Ruben’s main cover, it’s hard to choose which to buy — so you might as well get them all! (Laughs)

AP2HYC: Calvin & Hobbes, Spencer & Locke. Wizard of Oz, The O.Z. There seems to be a pattern emerging here. Are there any other characters you’ve thought about adapting one day?

Pepose: I have a pitch for Captain Planet that would make your toes curl and your heart sing. But as a personal pet project of Ted Turner’s, unless it’s licensed to IDW or BOOM!, I’d bet DC has the rights to ol’ Cap, so I can’t imagine it becoming a comic anytime soon.

But still, a man can dream…

You can find out more about The O.Z. via its Kickstarter campaign. Have you backed the comic yet? Sound off in the comments or send us your thoughts on Facebook or Twitter!