Home » The Long Wait Is Over: Frankenstein Undone #2 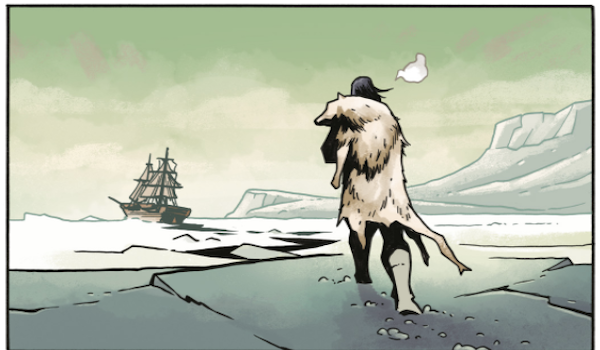 Frankenstein Undone is a somewhat odd series; an attempt to place Mary Shelly’s original Frankenstein narrative within the Mignolaverse, but also serve as a prequel to previous miniseries Frankenstein Underground. Mike Mignola and co-writer Scott Allie have opted to do this by picking up directly after the end of Shelly’s novel. This allows Shelly’s novel to exist within the Mignolaverse, while avoiding any direct contradictions with her text. I think it works. Mignola maintains a respect for Shelly while still maintaining his own trademark vibes. The balance is a delicate one and Mignola and Allie are pulling it off so far.

When we left Frankenstein’s monster all those months ago, he was wandering the arctic, seeing visions of a paradise world. As we pick up in issue #2, the monster is still in the arctic, lost in dreams. Even within his own mind’s constructed version of paradise, he can’t manage to fit in.  Still, he’s finding more temporary peace than he could in the real world. His mentor Arobas, tries to calm and bring him out of isolation by showing him this bygone world. It’s a lot of content and information to pack into one dream sequence, and when The Monster awakes next to Arobas’ bones, we are unsure of how long he’s been in this trance. Hours, days, or months—Mignola leaves it vague. 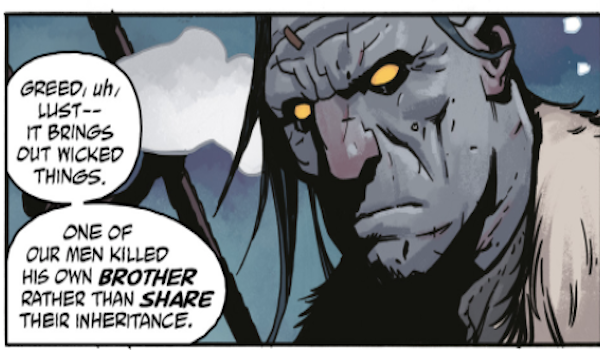 Frankenstein’s monster tries his newly learned pacifism on a wolf he meets, but the wolf is uncaring and attacks anyway. After a vicious fight, energetically drawn by Ben Stenbeck, the monster breaks the wolf’s neck. He stands amid the animal’s broken form, reflecting once again that “Man is no better than beast”. There is no serenity allowed for the wretched monster, even in the frozen wastes. So he stomps on, wandering the ice until he finds a ship, trapped in the ice. This is where the story really picks up, as the monster frees the ship, and aids the crew on their quest to find a lost and bygone city, like the one from his dreams.

We are left with a cliffhanger, as is the tradition of monthly serial comics. I hope that the wait will be shorter this time around, because I’m very much enjoying this miniseries. Stenbeck’s art with Mignola’s words is a deliciously haunting pairing, and it’s no wonder that Stenbeck has reign over the Gothic corner of the Mignolaverse. Having drawn for both Baltimore and Witchfinder, Stenbeck has complete command of the style the eras demand. He draws period clothes and settings with ease. It’s made more impressive because Gothic art is perhaps where Mignola is most iconic. Stenbeck’s greatest skill lies in how he draws his characters; his faces and postures are so evocative and stirring. He often draws eyes in shadows, and there’s one image of a morose monster that just haunts me.

Mignola and company prove that they’re still as good as they’ve ever been with this comic. After Mignola decided to end his timeline with the literal apocalypse last year, there was a lot of doubt about the future of his universe. Between Frankenstein Undone and the various Hellboy one-shots, it’s clear Mignola has had no trouble finding new stories in the old world.  I look forward to issue #3, with the hope that this time the wait is much shorter.

You can purchase this issue of Frankenstein Undone #2 here and sound off in the comments or send us your thoughts on Facebook or Twitter!