Home » Gray #1 is an Offbeat Mixture of Pulp and Concrete 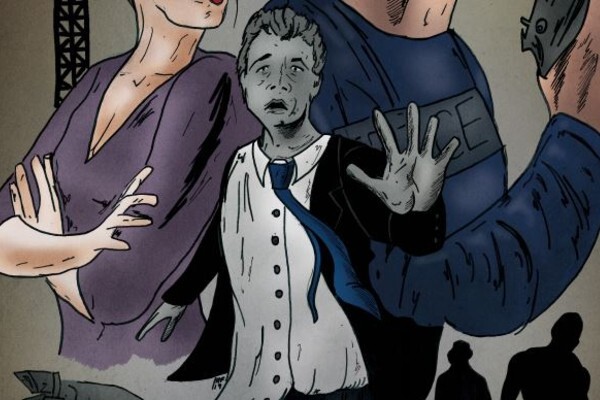 If you’re a fan of pulp superheroes who aren’t afraid to be a bit strange, if you’re a fan of Sam Raimi’s Darkman, then Gray will be the comic for you! We got a look at Gray #1 ahead of the upcoming second chapter. You can support Gray #2 on Kickstarter now, up until October 2nd.

Writer Daniel Faulkner blends familiar tropes of pulp detective stories with the most classic superhero story beats; undercover detective and vendetta from beyond the grave, with dreadful accidents and bestowing the hero with unlikely powers. Danny Gray is outed by the mob and left for dead underneath a ton of wet concrete. When he emerges alive, his flesh has been transformed into a rigid grey substance. He becomes Gray Concrete.

The banter in this first issue between Danny and his confidant Jordan is really familiar. It’s that typical story of an average Joe discovering their new superpowers. Danny’s mission is what really brings the story towards more classical masked-vigilante superhero tropes. Specifically, heroes like Shadow or Phantom from the ‘30s. Those heroes lived in grittier worlds and fought organised crime with a lot less hesitation to kill. They were written alongside the popular detective comics and pulp novellas of the time, and were as influenced by them as Gray seems to be. 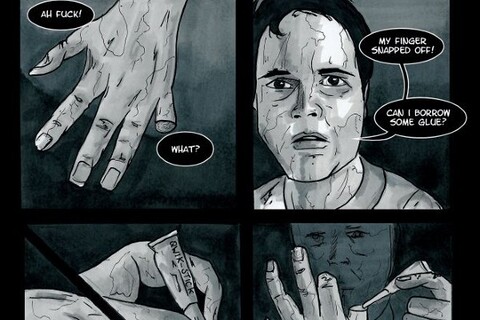 Gray is also almost entirely in greyscale. Though set in modern day, this compliments the tone of the book and its hero. It further encourages the comparison to those similar pulps from almost a century ago. Of course, it also seems obvious to colour a comic called Gray grey. Alongside this comparison to older superhero stories, use of greyscale throughout the comic also compliments the concrete premise. Specifically with Rees Finlay’s art, it’s like the characters and setting of the comic are also etched into concrete. It’s full of cracks; Finlay’s style accentuates the frowns, creases and wrinkles on characters’ faces. This makes the comic’s grittier setting more unsightly. Those characters become as alienating and strange as Danny after he emerges from the concrete.

Indeed, Danny Gray amongst the grey world too, doesn’t stick out as such an anomaly. Danny is excited to have bizarre powers, excited to smash a car and have revenge on the mob. He’s enthusiastic almost to the point of lunacy. This is matched by the offbeat tone of the storytelling. These panels of action are exaggerated, framed parallel with indulgent gore.

This review started with a reference to Sam Raimi. It really seems like this comic speaks to that same sense of whimsy. At the centre of this superhero story, there’s an off-kilter hero, set of powers, and sensibility. Ironically, Gray Concrete seems to be a bit unstable. But it’s that unpredictability which propels this issue, and which propels us forward into issue #2.

Have you read Gray #1, and have you backed #2 on Kickstarter yet? Sound off in the comments or send us your thoughts on Facebook or Twitter!