Pound for Pound wears its violent heart with pride. Its story of revenge against a ravenous cult is littered with non-stop fight scenes set against sun-kissed colours and brawny artwork that forms a hot, rough climate for the story to soak in. Artist Andy Belanger and colourist Daniela Miwa give the comic an exotic raggedness to suit Natalie Chaidez‘s action-driven story. However, such is the amount of violence drenched through the pages that the other elements come off as rather half-baked. The characters’ emotional turmoil that enables these endless fight scenes to play out doesn’t hit with the impact it feels like it should.

Pound for Pound follows MMA fighter Dani Libra’s quest to find her younger sister when she’s kidnapped by mobsters whilst being plagued by black-outs in the ring, and horrific flashbacks to a torturous moment in her past that rears its ugly head as the plot thickens. Throughout the comic, Pound for Pound delivers a thematic balance between exuberant action sequences, gorgeously crafted by Miwa and Belanger, with a subtle undercurrent of trauma, anguish and dark revelations. At least, it tries to. Much of the more emotionally taut aspects of Pound for Pound are delivered through exposition, clashing with the vibrant and bloody physicality of the comic. The two aspects fail to connect which is a shame because it remains an entertaining read in how blood-soaked the action is. 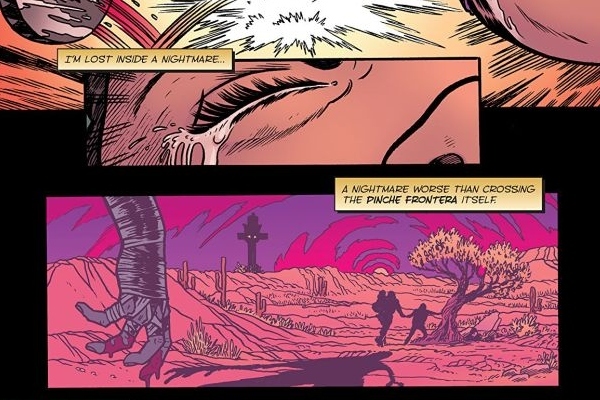 The graphic novel’s visual spectacle is the big draw at work here, but it’s at its most intriguing when it pits its wrestling heroine against a cultish gang that performs unspeakable acts on the human body in the name of God. This collision of premises enables the tone of bloodlust to spiral out in furious style. Miwa’s colours in particular are the real star of the comic. The Mexican setting is used as a platform for some sizzling reds, oranges and browns to kick the comic into a higher gear. Likewise, Serge Lapointe‘s lettering is as enthusiastic as the artwork; it remains stern and uncomplicated in delivering dialogue and narrative, but weaves its way into the gut-busting artwork with vigour.

The comic is at its least engaging with its characters. Aside from Dani’s sister – the character who actually propels the plot into motion (but is rarely seen throughout the story itself) – there isn’t one protagonist, antagonist or side character who doesn’t have a violent way to resolve a situation. As such, it can’t help but come off as entirely two-dimensional in its approach to its various players. Whilst it struggles to find creative cohesion in its themes and its exaggerated characters can’t help but pull you out of the reality it tries to create, it still manages to succeed in being a straight-forward violent thriller, and undoubtedly the most blood-ridden of TKO’s second wave of comics.

You can purchase the collected volume of Pound for Pound at Comixology or at the official TKO website. If you enjoy, comment down below your thoughts or let us know on Facebook or Twitter!