Home » Rorschach 2020: What We Should Expect 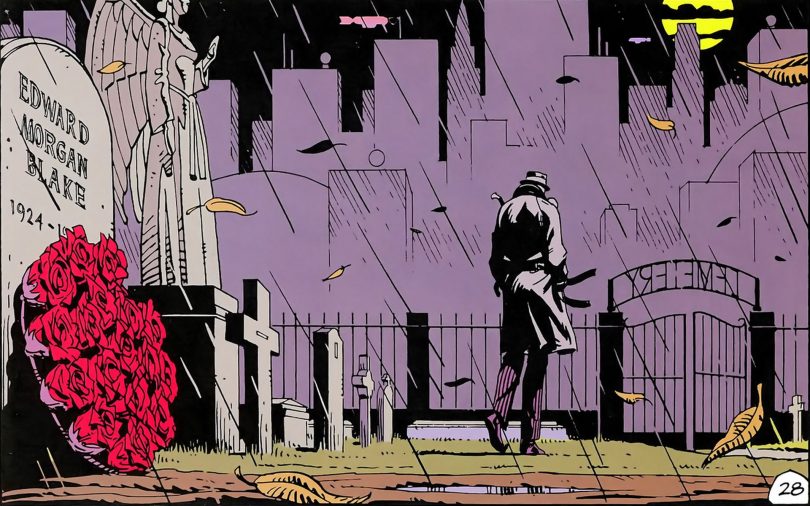 On July 15th earlier this year, DC Comics proudly announced that they’d be releasing a new comic series based on the Watchmen character, Rorschach. The twelve issue maxi-series would be written by Tom King, and he teamed up with artist Jorge Fornés to revive the trench coat-wearing “hero”.

The series would place Rorschach in the present day, thirty five years after Dr. Manhattan killed him. King sites in DC’s initial announcement that the series isn’t named after the Walter Kovacs incarnation, nor would Kovacs necessarily be the Rorschach that appears in the series. Instead, the title is aptly named “because what you see in these characters tells you more about yourself than about them”. Based on that, it’s entirely possible that there will be no clearly defined hero or villain. Instead, every reader will be able to decide for themselves who’s in the right based on their actions and motives.

So what’s the premise? After President Robert Redford is opposed by a new candidate for the first time in decades, Rorschach appears alongside another assassin in an attempt to kill the new candidate. A detective is placed on the case, and in his search he uncovers the assassins’ identities and motives alongside a slew of other mystical conspiracies. It’s an adventure set in the present day, yet walks back in time in order to solve the modern day mystery.

Right off the bat, we shouldn’t be expecting Walter Kovacs back as Rorschach. After all, Dr. Manhattan basically performed a Thanos Snap and turned him to dust! Someone new has likely taken up the mantle, like how Spiderman has been passed along to different people, unless Kovacs was somehow resurrected. Either way, this Rorschach doesn’t last that long. Our unnamed protagonist will be the detective set on solving the case of Rorschach and his assassin teammate’s deaths.

Much like the 2009 Watchmen movie and the recent HBO television series The Watchmen, we should also be prepared for an extremely gritty and politically centered narrative. The premise DC provided says it all: two assassins tried to kill the only candidate running against the President. There must be some rhyme or reason behind their actions, and the simple fact that Robert Redford has been in office for decades without competition raises some eyebrows on its own. The HBO series, set thirty years after the original comic ended, shows how Rorschach’s journal was key in developing the Seventh Kavalry, a white supremacist cult. Their radical ideology, inspired by the journal, lead to a violent protest against the president and law enforcement. So it’s possible that the new comic series will follow the show’s trail, with Rorschach and the assassin they work with in cohorts with the Seventh Kavalry.

So our detective protagonist is in for a wild ride. Whether his intentions are pure of heart, the information he’ll be digging up will be full of conspiracies, theories and radical ideas. Walter Kovacs was nowhere near a hero, though many of his proclamations were truthful and came from a place of good. But seeing as his writing is being misinterpreted by a violent organization already, how will the detective understand what is truly right and wrong?

On top of being politically oriented, this story might be a cautionary tale of morally grey choices, and how well-meaning people aren’t always heroes. Just like the Rorschach test, it’s up to each of us to determine who’s in the right. The detective we follow may be one of these characters, a man who has good intentions, but gets so mixed up in his investigation that he begins to lose himself. I personally hope that he remains something of a blank slate. If we’re meant to take away our own viewpoints of certain characters, then having a main character who isn’t meant to be aligned with either side could be refreshing. Then again, if our detective does lose his way during the investigation, a descent into madness would be equally entertaining and fitting for Rorschach’s ideology.

Overall, I’m excited for this new series! Rorschach is one of my favorite characters in the DC universe. Even if it’s not Walter Kovacs making a return as the masked antihero, it’ll be compelling to see the legacy and impact of Rorschach unraveled in a new comic series. The mystery awaits us—only us.

Rorschach #1 will be released on October 13th and will retail for $4.99. It’ll have DC’s Black Label descriptor, which means the content will be appropriate for audiences aged 17 and up.

Are you looking forward to the Rorschach comic series? Sound off in the comments or send us your thoughts on Twitter!