Home » INTERVIEW: Joe Pearson, Creator Of “Pearl Jam: Art Of Do The Evolution” 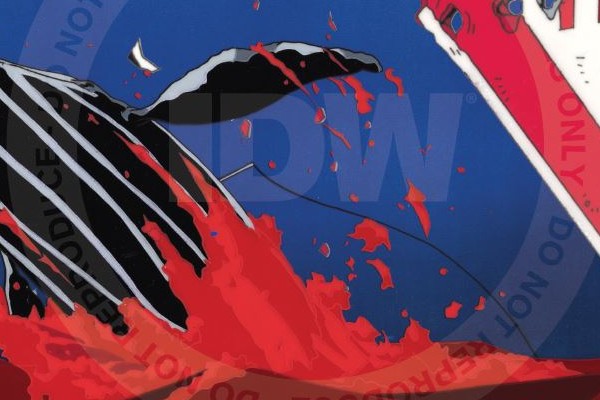 Ever seen the music video Do The Evolution by Pearl Jam? Have you ever wondered about the genesis of the video? Well, wonder no more! Joe Pearson, head of Epoch Ink Animation, has written a book on the process. In full color and including original cels from the production, this art book is a must for Pearl Jam fans and animation nerds alike. Lucky for us, we got an interview with Joe to find out what he has to say about it. You can also watch the full music video down below!

Pearson: I’m a jack of all trades, a master of some, and an apprentice at most. I’ve been working in the animation industry about thirty five plus years. Before that I was working as an illustrator. In animation, I’ve worked as an artist, a writer, an animation director and producer, and beginning in the 90’s I set-up my own animation studio – Epoch Ink. So I’ve been working as a creative since the late seventies, early eighties. I grew up reading science fiction and comics. I remember buying my first Fantastic Four issue on the newsstand. That tells you a lot right? I grew up reading Marvel comics, and science fiction, going to the movies – you could see a double bill at the local theater for 50 cents – and of course watching lots of animation: Disney, and especially the great Looney Toons cartoons. What I love doing best is writing and developing new concepts and worlds for games, or film, or tv. And also comics.

AP2HYC: Pulling in this art book. It’s part memoir, part animation cels, and part storyboard pages. How did you design the layout for it?

Pearson: Well, I produced the video back at my studio in 1998, and I had about five to ten percent of the original cels from the video and all of the storyboards, and all of the predevelopment art and character designs. I gave all the artwork and materials to Robbie Robbins at IDW and we brainstormed how to approach the book. I did a breakdown of how I saw the book working, with each chapter being based off of a lyric from the song, etc. Then, I wrote about 40 pages of text for each chapter and gave that to Robbie with suggestions about where to place the art within each chapter. He was really the one who took the hundreds and hundreds of images that we had scanned and placed them into the appropriate chapters. He’s the one that did this incredible, incredible deconstructed layout for the book. I think a good part of the book’s appeal is in Robbie’s layout and the design, and the way they use those images to really give the viewer kind of a feeling of being in the middle of the production. He was really a full collaborator on the book.

AP2HYC: The video and the book really do grapple with the dark side of human nature. What would you say some of the themes are that you’re trying to get across?

Pearson: Initially, we didn’t have a strong creative mandate from Todd McFarlane or Eddie Vedder as to what the content of the video would be, just that it would be an edgy video—kind of a warning video. And when Kevin Altieri and I read the lyrics, and saw a version of Do The Evolution that Eddie had made on his home editing machine using the animated Spawn, it solidified the direction and “feel” of where we could go with the video. Most of the lyrics to Do The Evolution is a scream of rage against what we’re doing to ourselves and the planet. So we made the video really just echoing the lyrics from Eddie’s song. I’ve been criticized by people for leaving out other holocausts or other terrible events from history, like the fact that the Mongol warlord/genius Genghis Khan killed a quarter of the world’s population in the twelfth century. That certainly could’ve been something we put in there. But in four minutes, we really had to try and limit ourselves to just a number of clear events. To answer your question more succinctly, our message in the video really was reflective of the song’s lyrics.

AP2HYC: Is there any part of the video that you would say hits for you, particularly?

Pearson: Man, let me think about that. I mean, there’s so many areas in there of strong interest to me. Before I was in animation I actually did a lot of political cartoons, and a lot of editorial cartoons, kind of like in the New York Times book review or opinion page sections. That kind of artwork. And I did a lot of political commentary illustrations using metamorphic shapes and drawings. So I think for me the scene of the giant metal sandworms coming out of a city, scooping up the earth, shoveling it up and bringing it back and dumping it into this sort of pulsating city monster in the background. It just kind of sums up everything we are doing to the planet. If you freeze a frame of that shot, you have an editorial illustration or commentary.

AP2HYC: What or who are some of your animation inspirations?

Pearson: Well, I’ve got a lot. I grew up watching the Warner Brothers cartoons and just loving them. So there’s a side of me that loves Bugs Bunny and Looney Tunes. I was one of the key designers and concept people on the original Crash Bandicoot Cartoon. And if you look at Crash and his design and his actions, you’ll see a lot of Bugs Bunny in there. On the other hand, as far as animation goes, it’s all about Hayao Miyazaki. He’s truly the greatest animation director living today, and one of the great directors in any media living today. I number his films up there with the best films of all time. So I would say the two of them are two of my biggest influences. And I love the great Disney cartoons, I like Pixar stuff, Illumination stuff. But I really love Miyazaki; he’s got like a world soul that’s unique and beautiful. He conceptualizes and directs action like a master, but also does these quiet, human and naturalistic moments of incredible beauty.

AP2HYC: What comes next for you after this project?

Pearson: Oh boy. Well, I feel like I’m semi retired, especially with Covid right now. I settled on an IP of mine called La Cruz, which is sort of like Blade, but oriented around the L.A. Chicano culture and locale. It’s centered around Arturo De la Cruz, a Chicano who hasn’t aged in forty years since he was attacked and marked by demon gods in Guatemala. He’s been cursed by them, but he’s living in L.A., hunting down monsters and demons and fighting the beast inside him. And the demon gods come up to L.A. and start to infiltrate and turn gang members into demons. Part of their plan is to resurrect their demon god lord and bring back hell on earth, to Los Angeles, and then [to the rest of] the world. It’s a gothic, Chicano oriented, horror action series that would be done in a very hard edged anime style, laced with moments of surrealism similar to those in the epic first season of American Gods. We’re finishing the pitch bible now. All that’s left to do is to attach some named Hispanic actors to the project.

Huge thanks to Joe for his time and such an interesting conversation. If you loved reading this too and would like to know more about Joe and Pearl Jam: Art of Do The Evolution, the graphic novel is now available on IDW Publishing. Have any thoughts on the book? Sound off in the comments or tell us what you think on Facebook or Twitter!