Home » “Popova” Is Entertaining And Fun, But There Are Things We Need To Address 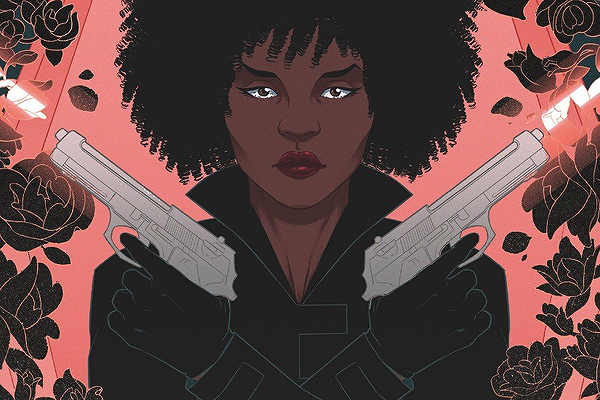 Is violence a good way to fight your oppressors, or is aggression a predominantly male characteristic? These are the questions that authors Dre Torres and Alex Valdes are trying to answer. Popova is a revenge fantasy comic book series; it reverses gender stereotypes by depicting women’s aggression as something to be wary of. The series features the invaluable contribution of Yasmin Liang‘s artwork, Kuen Tang‘s letters, and Amin De Jesus‘s design.

The first issue of Popova introduces us to a secret society of women. This is led by a character named The Madam. They abide to a very strict code and in fact, the members of this group swear to kill abusive men; they never get into relationships with men in general. One day, one of our main characters, Scarlet Rose, decides to abandon the group. She starts questioning the group’s morals and goes solo killing for money.

Scarlet fakes her death and begins a new life with a partner who is unaware of her past. That is until, Sadie – one of the most loyal members to the secret society – finds Scarlet. She then threatens to kill her fiancé if she refuses to meet their boss. The second issue presents a series of flashbacks on Sadie’s past and how she and Scarlet met. Meanwhile, the two women meet The Madam and the rest of the society members.

The novel opens with Scarlet poisoning a lesbian woman. We don’t know anything about her, save for the fact that she is on a date with another woman. We’re not given any in-depth reason as to why Scarlet kills her, only a vague reference to it. We have to note that often, queer characters are killed off or portrayed as tragic figures in the media. While necessary in certain stories, there is a risk of normalising homosexuality as doomed.

In another instance, a black woman dies with no valid explanation as to why. This event does not impact the plot in any significant manner. There is a recent surge of POC and LGBTQ+ representation in media. As fantastic as that is, there are still certain representations that are harmful in portraying minorities. It is very important to be mindful of what these stories can present or exhibit.

The plot has its weaknesses as well. Scarlet Rose leaves the society because she realises that things are not as black and white as she believes them to be. She changes, begins killing women, and gets a boyfriend. From a structural point of view, it would make more sense if she stopped killing altogether. She’ll then realise she misses killing and craves it. Killing, after all, is the reason why she joined the society in the first place.

This realisation would have given her character more nuance. It would provide her room to explore the complexity of serving extreme ideologies. This main theme becomes an overbearing focus for the writers. This results in a significant absence of round characters or story development. The characters overall tend to be of surface-level; female characters lack personality, and we don’t find out a lot about any positive male figures because they are killed or defamed.

I understand the authors’ intent was to write a feminist story about women taking control. But Popova almost portrays feminism to be a negative thing; as if women are just as violent if given the chance. I was a little disappointed. I am personally a fan of female antiheroes or female psychopaths in fiction. However, it is necessary to focus on the characters first and then let the theme organically develop. I think the feminist angle would have been more compelling if the creators explored character development rather than advertise this is a feminist story.

Popova does have a lot of positive aspects as well. It perfectly and directly represents sexism and patriarchy. Women are drawn realistically and are not sexualised. The cover is iconic; Liang’s artwork is simply brilliant! What is outstanding about her work are the characters’ facial features—expressive and detailed; the reader is able to notice every single emotional change in every characters’ expression. The use of close up is always perfectly timed, and never exaggerated or unnecessary. I don’t miss colours because their absence enhance the dark and thriller aspect of the story.

I won’t lie; Popova left me a little perplexed. The authors are clearly talented and creative, so my hesitation has nothing to do with the quality of the work. However, there are certain topics or key words that are inherently political, no matter the tone we choose to write about them. This treads on delicate lines and can affect certain enjoyments of the stories we encounter. But Popova is definitely entertaining, with Liang’s artwork simply being exceptional!

Have you read Popova? If you have yet to and would like to, you can purchase the first issue at Comixology. If you like it, sound off in the comments or send us your thoughts on Facebook or Twitter!