Home » “Ruination #1” is a Gorgeous Look at an Expansive World 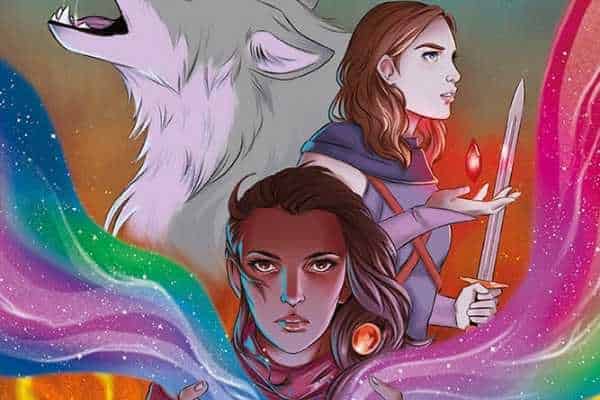 I recently got the chance to read the first issue of Ruination, which has now launched on Kickstarter. Written and created by Ryan Bis, Ruination is drawn by Giulia Lalli, colored by Kaytee Brown, lettered by Matias Zanetti, and edited by Nicole D’Andria, with cover art provided by Rio Burton.

Ruination is a heck of a ride. Immediate credit to Brown for her excellent color work. Every visual effect is stunning, the magic, the flames, the lighting, the ghosts – all-around gorgeous. Reviewing artistic direction for the first issue of a comic series is always exciting. I start to think: “We get more of this?” And the idea of more of those beautiful neons brings a smile to my face. Yet reviewing narrative in a first issue is a daunting task, especially when that issue takes place in such a novel and foreign setting. As a reader, I can only peek through this one, tiny keyhole at the much larger world. I take some information on faith, knowing more will come in further issues.

For example, Ruination #1 introduces a frightening number of new characters to readers. Coupled with infrequent usage of character names, the deeper narrative seems confusing on the first read-through. Who are these people? Why does Ryan Bis show us their stories in particular? On my subsequent read-throughs, the bigger picture started to coalesce. There are factions within factions, and allegiances to moral codes larger and stronger than allegiances to peoples or nations. Ruination takes place in a much larger world than one issue can hope to contain.

Bis appears to be crafting an epic, magic-infused, action-adventure narrative that will span many issues, and Ruination certainly has that potential. There are just that many open-ended and interesting questions to answer. For instance, Most of the magic-users in Ruination are women, and they carry crystals that glow in the presence or activation of magic. The man that we see using something akin to magic, the revenge-bent Fallen leader Silas, uses a non-colored energy form that distinctly opposes the colorful crystal magic of the women. Silas begins Ruination cooperating with one such woman in search of one such crystal, for reasons unknown. Perhaps I’m reading too far into these things, but there definitely are much deeper secrets about the origin of magic that readers won’t have immediate answers to.

Beyond the systems of magic that I geek out to, I have history questions, too. What provoked the war between the Fallen and the Saldyrians so many years ago? Why did it suspend for forty years? Are these the only two warring factions? I’m a sucker for lore. I hope that Bis chooses to share it with us. I won’t spoil the massive lore cliffhanger on the last page, but I have tons of questions about it. Where did it come from? Are there more of them? Bis’ first issue shows unbound creativity, but we’ll have to wait and see how he focuses it into a compelling and coherent narrative arc.

I initially complained about feeling confused while reading Ruination #1. The stakes of the battles, the weapons and magic being wielded, why some characters are confused by supernatural abilities and others aren’t, and so many more details go unexplained. However, I soon realized that this was due to a lack of narrative space. These are just the first 28 pages of Ruination, after all. After spending more time with it, I realized many of these questions will be answered in time, with more pages. We certainly have not approached the culmination of narratives in Ruination. I have a gut feeling that by this first issue’s end, we aren’t even at the story’s true beginning.

Don’t confuse long-form narrative with pacing, though, since Ruination is one of the fastest-paced comics I’ve read. Bis manages to fit a ton of different story lines into just this one issue, for better and for worse. The pacing allowed Bis to showcase the expansive Ruination world expertly brought to life by the art team. Bis introduces many characters and locations. On the flip side, characters’ emotions  and mannerisms change so rapidly that I sometimes felt disconnected from them. Children witness murder for the first time in their lives on one page, and can laugh at jokes or hop into a magic portal on another. It felt a little disjointed. Still, I’m confident that these problems will smooth out in further issues, as characters familiarize themselves with each other and their new adventure.

There are so many good parts of Ruination. The two most enticing elements of a fantasy setting, lore and scenery, are done expertly. Lalli’s linework is clean, and allows Brown room to explore beautiful color gradients through golden lighting and neon magic. The panels in Ruination really are a joy to look at. Bis has crafted an expansive world just waiting to be explored.

You can find out more about Ruination at the Kickstarter, and then remember to sound off in the comments or send us your thoughts on Facebook or Twitter!