Home » “Brokenland” is a Charming Return to More Misanthropic Nonsense 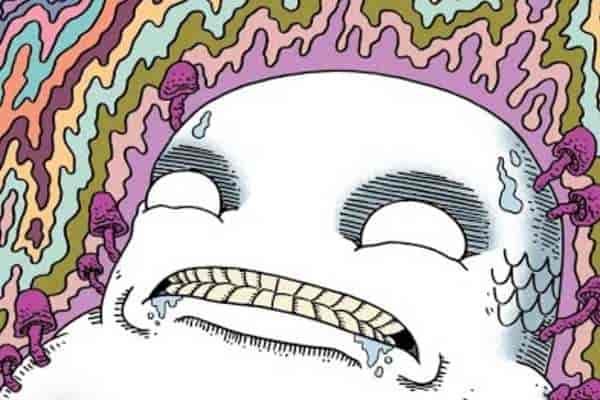 In August last year, we reviewed Drew Morrison’s Brokenland (issues 1 and 2). You can read our review here – we called it a charming and uniquely funny comic where the beautiful art was the star. That’s the same for Brokenland issue 3, which is currently crowdfunding on Kickstarter. See here for some more information on how you can support the campaign!

Brokenland is a silent comic, so when we say the art is the star, we mean it’s doing all the heavy-lifting. Story and character take a backseat when the art is this complex and phantasmagoric. The little hero you’ll recognise on the cover, Meeso, makes his way through Brokenland; suffering, tricking, breaking and transforming – with all the logic of a peyote trip. Anyone who tuned into Netflix’s The Midnight Gospel last year will have a blast!

And that was one of my closest points of reference for the style of Brokenland. It’s somewhere between the whimsical work of Adventure Time creator Pendleton Ward and the cynical, uncomfortable cartoons of Ralph Bakshi. Clear throughlines to Bakshi’s transgressive cartoons include the use of anthropomorphised animal characters. Particularly to caricature figures of authority and the crude marriage of childish cartoons with explicit subject matter. Morrison’s clean linework provides the same lurid details and crass expressions as Bakshi’s too. Brokenland harkens back to Bakshi’s outspoken work, and to the similar underground zines of Bakshi’s era, and applies it to a more modern problem.

The most striking part of the setting in Brokenland is the immense litter and pollution decorating every street and landscape like wildlife; Morrison’s world is a literal wasteland. While pollution is hardly a modern issue, real concern about pollution definitely is. Don’t mistake Brokenland for a straightorward didactic about responsibility, though. In fact, it really punctuates our lackadaisical response to pollution. It’s just part of the world now, you move through it.

If you’ve read Brokenland issues 1 and 2, you’ll know what to expect and probably enjoy issue 3. There’s an ongoing story through these issues, but it’s nonsense, an acid-trip adventure. You really can imagine this as a physical zine: you can admire the design of each page, the balance of the erratic and detailed art across the panels. You’ve got to admire the charm of Brokenland, especially when so much creativity is also on show.

For more information, check out the Kickstarter for Brokenland here. Then don’t forget to sound off in the comments or send us your thoughts on Facebook or Twitter!