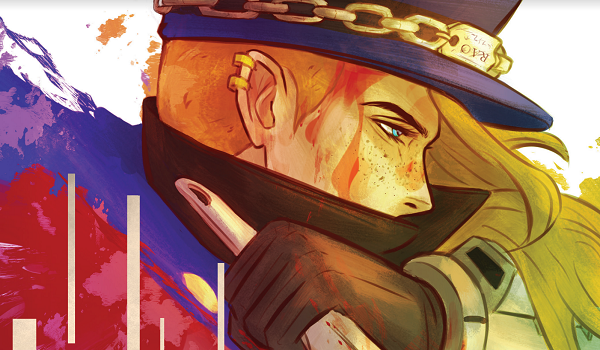 War breeds heroes, but war also gives rise to cold-blooded killers. What happens when war transforms you into both? The story of Commander Rao answers this question by presenting a tragic hero who fights for what she has lost. Written and illustrated by Fell Hound, LetterSquid provides text and lettering. After a successful Kickstarter campaign, many backers have been getting their physical copies. So let’s delve into the war-torn world of Commander Rao.

The first page presents a newspaper article dated September 5th, 2×75. This serves as an introduction to the world, and to our title character. Born as Kasey Elizabeth Cormack, Commander Rao is currently being memorialized for singlehandedly defeating the evil Baron Klaus after a decade of war. She’s a former-army-captain-turned-rogue, though her design still harbors hints of her military background. While the article serves as worldbuilding introduction, it also reveals that Rao dies at the end of the story.

Everything truly begins one day prior to the newspaper’s release. We follow Commander Rao as she approaches the enemy base. She proceeds to fight her way inside, arming herself with tons of gadgets and weapons. This includes a sniper rifle, grappling hooks, jetpack boots, and hidden blades in her gauntlets. Displaying her equipment, she forces her way into the Baron’s manor, killing soldiers left and right in a glorious yet brutal fashion.

Along the way, Rao flashes back to her time with Julie, another soldier of the Resistance Army. These flashbacks tell us about Rao’s prior war injuries, and how the two were incredibly tight at the hip. There are subtle hints that can be read as if Julie and Rao as romantically involved. But there is no overt clarification for this. However, we do find out that Julie’s last name is Rao, the inspiration for Commander Rao’s alias.

By the end, we also discover that Julie’s death is the catalyst for Rao’s rampage. She avenges Julie by throwing Baron Klaus off of his own balcony. It’s a chilling scene, with the Baron’s final moments falling as Rao watches from above. Julie and Rao’s question remains unanswered, and Rao bleeds out from her injuries on his throne. It’s a tragic end for a tragic hero. Still, she dies with a smile as she realizes she’ll see Julie again. 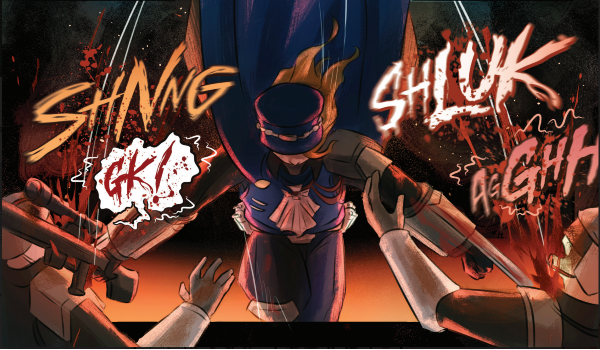 The art style is visually pleasing, and the action is easy to follow. One of the comic’s greatest asset in this regard is its use of color. The atmosphere weighs heavy with fiery reds and blacks, but Rao shines in vibrant blues. The flashbacks appear in gold and yellow hues, tying in all three primary colors. The yellow also suggests brighter moments in Rao’s past – moments overtaken by domineering reds across her journey. Yellow is also present in the first and final pages of the story, as the people celebrate victory after Rao’s passing.

What’s interesting is that Baron Klaus also wears a lot of blue. He’s the central villain of the story, and his role in the war incites hatred from readers. But he wears the same colors as the hero we’re rooting for. This choice is incredibly well-thought; it speaks to Rao’s goals and what she’s trying to obtain throughout the story. She wants to avenge Julie’s death, but it’s at the cost of her humanity. It’s at the cost of the lives of Baron Klaus, and the soldiers she kills along the way. Do her methods classify her as a villain, or a different kind of hero?

I also appreciate how the end of the comic includes concept art and process shots. I think it’s fascinating seeing how much work goes into constructing each panel. It’s easy to tell how much love and care went into Rao’s design, especially the choice to keep her cape and remove the right shoulder pad. There’s even specific instructions on how to achieve the dramatic lighting and shading! Seriously, it’s obvious how much detail Hound gives this story.

Overall, Commander Rao was an absolute pleasure to read. For such a short comic, it gripped my heart in a way many comics had never done before. I was invested in Rao from the very beginning; I was invested in Rao all the way to the end. May we always remember her as a hero among the stars.

Have you read Commander Rao yet? If not, you can order it off of Fell Hound’s Gumroad. Let us know what you think by sounding off in the comments or sending us your thoughts on Facebook or Twitter!