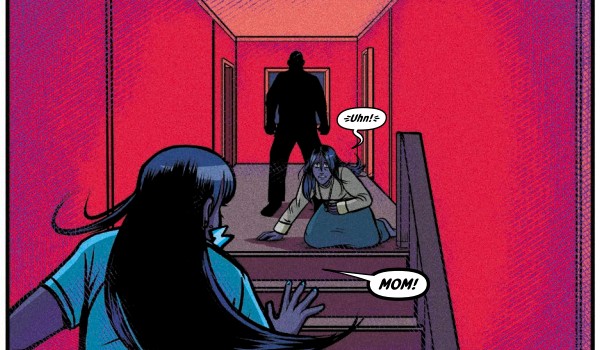 Finger Guns #3 by Justin Richards and Val Halveston really starts to ramp up the conflict to new heights. It continues to develop the dynamics surrounding the protagonists; the struggle between Sadie and her father escalates in a rather somber effect. The previous issues felt very much like a lot of setup. However, #3 pushes the conflict forward with considerable momentum.

This issue picks up with the teens continuing to hang out more and more throughout their school day. After school, they decide to try out a new finger gun. They try it on Wes’s dog which remarkably allows it to perform new amazing tricks. They determine that this new finger gun has the ability to make someone brave.

The teens continue to explore the new gun’s effect while also bonding over some music. This more jovial tone ends when Sadie comes back home to try out the bravery gun on her mother. She does this so that she can stand up to her father. The approach goes bad very fast, leaving the story with a rather bleak ending for Sadie. This stands in stark contrast to Wes whose life seems to be moving on an upswing.

The life insurance plot is quickly thrown away. Finger Guns #3 instead utilizes the tension set-up between Sadie and her father to create a great sense of urgency and importance in the act of playing with finger guns. It also continues the idea that Sadie’s father is a kind of unstoppable, malevolent force. The depictions of domestic abuse get much more explicit in this issue; her father now batters around both Sadie and her mother.

The colors for some of these scenes are much more stylized than the normal artwork in the series; characters are rendered in dark blues and purples against a vibrant red background. All of this aids in highlighting a sense of danger and intensity. This juxtaposes with some of the earlier dancing and comradery scenes. These scenes utilize locomotion and a visual flow of sheet music to really add a sense of spontaneity and joy. In general, the art in this issue features a much greater emphasis on the kinetic and mood.

Finger Guns #3 pushes the conflict and tensions forward with great success. The ongoing struggle between Sadie and her father has never been more dire than in this issue. Nor has the difference with her home life in contrast to Wes been more stark. There is a greater sense of intensity within both the narrative and artwork; both writing and art emphasize the weight of the conflict within the story. Considering this issue’s dark end, it will be very interesting to see how it gets pushed even further in #4.

What did you think of Finger Guns #3? If you have yet to read it, be sure to checkout our review of #1 and #2. It’s also available to purchase at Comixology. Let us know what you think so far in the comments or send us your thoughts on Facebook or Twitter!