Home » XII: Of Magic and Muses: A Coming-of-Age Story Like No Other 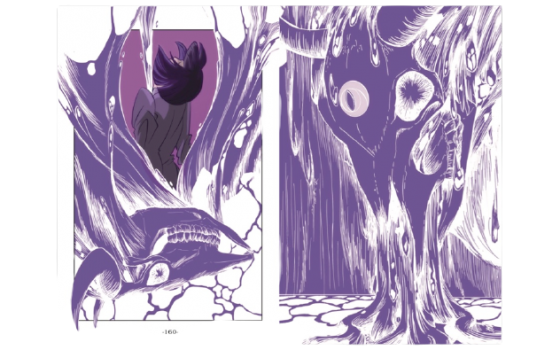 Let me be honest with you. I have a very short attention span. I wasn’t necessarily influenced by Vine or Snapchat growing up. Nevertheless, the stereotypes of my generation have hit me hard in the face. And, unfortunately, it can be very hard for me to focus on a singular task for a long time. Even if it’s reading a story about monsters and magic.

So, when I heard that it was my task to review two 350-page volumes of a comic series, what do you think my initial gut reaction was? This is going to take me months to finish! But, in this case, don’t judge a book by its volume. Because luckily I was reading Kristen Kiomall-Evans’ XII: Of Magic and Muses, a mystical story with a clever plot that continually keeps the reader engaged and looking forward to what’s next for our main characters.

What is the story and who writes it? 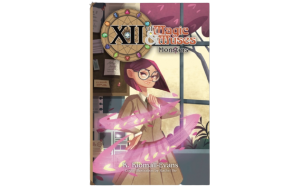 Part action, part mystery/horror, and part coming-of-age Kiomall-Evans’ work explores the mystical arts inside a boarding school. Except, almost everything that is related to magic in this story happens by accident, leaving the readers and the main characters constantly asking questions throughout. And that’s the fun of it!

As of now, Evans has written and distributed Volume 1: Monsters and Volume 2: Mischief, with Volume 3: Malice on the horizon. Along with writing all three volumes, Kiomall-Evans takes on the role of producing the comic art. Also contributing to the illustrations are Rachel Ho as the cover artist, Shannon Bergin as the logo designer, as well as various spread artist features throughout. The volumes are printed by Rapid Livres Books and having been distributed online ever since 2016. And volumes 1 and 2 give us plenty to look forward to in volume 3!

What separates this comic from the pack?

So what sets this comic about magic and monsters apart from other stories carrying similar themes? Well for one, Hagrid doesn’t come to the protagonist’s house and explain their entire life’s purpose to them. Basically what happens is our main character Willow acquires a magic necklace. And she has no idea how she got it or how to use this necklace. The powers from this necklace ultimately begin to spread like a virus and infect/possess others at the school. All the while, Willow, as well as the other characters, never conveniently meet up with someone who can tell her what this necklace is and can do.

Because of this lack of knowledge, Willow makes a lot of mistakes. And when the magic necklaces start popping up and going to other girls at the boarding school, our central characters are left in some very precarious situations. We then begin to learn about the other girls that acquire this magic, as well as the strict, increasingly mysterious boarding school they attend. In her adventures, Willow is subsequently accompanied by her best friend Emma and the two unconventionally join forces with bullies and nagging sisters. The girls trying to figure out the magic they have stumbled upon also correlates with the comic’s coming-of-age themes.

Why should you read XII: Of Magic and Muses 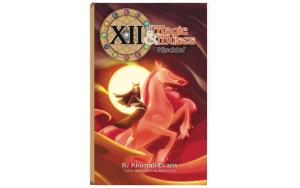 Kiomall-Evans’ piece is a gradual burn. I say this because her combination of luminous visuals, as well as the multi-layered plot in her work, never makes the story feel slow. Also, this is a great coming-of-age story for characters that are learning to be independent. Because at first, Willow and Emma consider reporting the magic that they stumble upon to the school. But sometimes seeking advice from adults isn’t the answer.

While we explore characters like Willow and Emma’s magic, their character development is just as compelling as their powers.  The bully turned ally and friend Georgia is a great example of this. The relationship between the three doesn’t immediately mend itself, but Georgia eventually becomes a fierce ally and multi-layered character. But it takes time which is exactly what this story does overall. It takes its time but travels at a gradual, compelling pace. All of these traits of Kiomall-Evans’ works are what make XII: Of Magic and Muses a comic for all ages. Especially if you let your kids watch movies like Harry Potter.

Be on the lookout for Volume 3!

On this journey with Willow, Georgia, Emma, and others we go from monsters to mischief and soon to malice. And Volume 3: Malice will be the most consequential and darkest of the trilogy. Which is exactly what volume 2 alludes to as a lot of stuff (keeping it PG since kids should read this comic as well) hits the fan at the end. Once again, this reads very quickly, so no need to get intimidated by the page count. If someone with an easily distracted, Gen-Z like attention span like yours truly is saying this, you know it’s true! So if you’re into monsters, magic, mischief, malice, magnificently vibrant colors, etc…give the XII: Of Magic and Muses trilogy a read so that you don’t lose your mind if you suddenly acquire magic powers.

If you want more details about XII: Of Magic and Muses you can check the Kickstarter here! See how you can access the full trilogy, and if you already have read volumes 1 and 2, sound off on both our Twitter and/or Facebook feeds to let us know about what you thought!