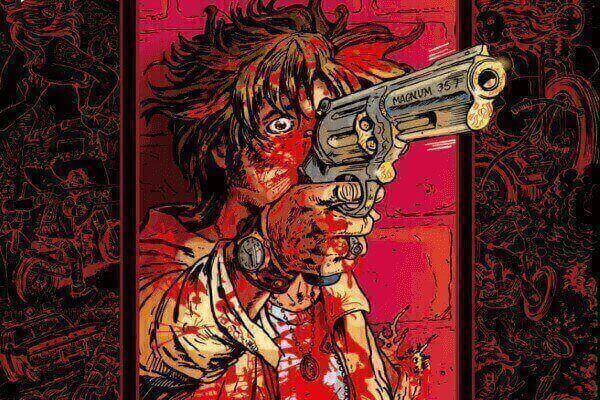 Tim Larsen’s six part mini series, Mayfield Eight, is set in 1974 Albuquerque and follows the story of Calvin Ryder as his life drastically changes. He goes from the safety of a quiet life into the dangerous world of drug cartels and motorcycle gangs in a matter of days.

Issue #1 introduces Calvin as a good-hearted seventeen year old. He appears to be bored in his hometown and is struggling to make ends meet with his fry cook job. It’s here his desire for adventure shines through the opening narration; telling the despairing story of his father’s death on the day Calvin was born. Despite the note of sadness, it’s clear that Calvin wants to be as free and wild as his father was before he passed.

On his seventeenth birthday (and the overshadowing anniversary of his fathers death) Calvin’s friend, Lenny, invites him to go on a road trip to Mexico. The smooth talking part-time mechanic, part-time drug dealer and full-time con artist, proposes a business arrangement. Despite his reluctance to celebrate, Calvin agrees to go to Mexico. He hopes to pay off his motorcycle, make some easy cash, and is even promised sex with prostitutes. Unbeknownst to him, he agrees to take part in a drug deal that will undoubtedly blow up in their faces.

A highlight of this issue was the encounter between Calvin and a ruthless motorcycle gang on the way to Mexico. Calvin displays youthful impulsivity when he retaliates to harassment by spraying a biker in the face with spray paint. The ensuing motorcycle chase was exciting and left this reader chuckling at the teenagers daring actions.

The bright neon colors emanate with 70’s nostalgia and the art itself is very intricate. Larsen excellently conveys the character’s emotions through body language and facial expressions. The settings also contain an impressive amount of details as well. Larsen includes historical notes like President Nixon’s impeachment on the radio and mentions of the Vietnam War within the dialogue. So these all add to authenticity of this 1970’s world. This attention to detailed settings is important since Calvin’s environment will undoubtedly be a vital factor in his character development throughout the series.

Mayfield Eight is an edgy and exhilarating coming-of-age story that swiftly invites the reader on a chaotic adventure. The comic promises a wild ride full of colorful characters like the cutthroat motorcycle gang, dirty cops, and the con artist. The unfiltered dialogue, graphic scenes of nudity and violence adds to the integrity of Larsen’s story. The readers can see the walls closing in around the teenager even before he realizes it himself. By the end of the first issue, there are several conflicts set to explode as Calvin inadvertently sets off down a road that will change him forever.

For more information on Mayfield Eight checkout the Kickstarter here and be sure to sound off in the comments or send us your thoughts on Facebook or Twitter!