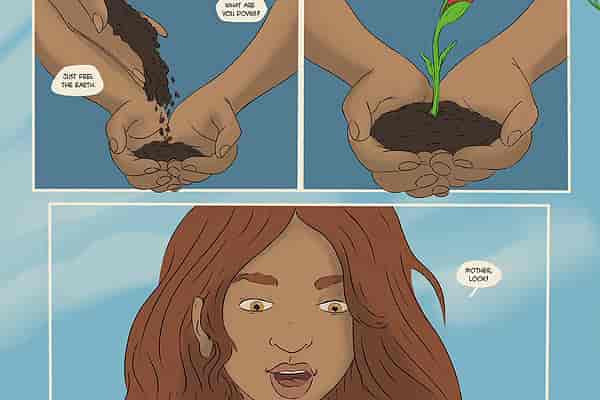 Secret Rites is an Ancient Greek-styled drama; it weaves the story of Demeter’s quest to save Persephone from the underworld, together with a cult ritual in Demeter’s honor. Intriguing premise and incredible art available on its Kickstarter page, Secret Rites does not disappoint. With such a fascinating comic on the rise, I was very excited to interview creator Sammy Ward.

A Place To Hang Your Cape: What was the first idea that led you to Secret Rites; what made you sure Secret Rites was a story you wanted to tell?

Sammy Ward: The idea came to me when I was participating in a famous drawing challenge known as Inktober – a couple of years back. I wasn’t following the usual prompt list but drawing deities from different cultures. It was when I was doing some in-depth research about Persephone that I discovered the Eleusinian Mysteries. It’s a cult ritual honouring Demeter and Persephone. It just captured my imagination in the way that it was a real mystery! So, it opened up all these possibilities that I played around with for a while, before writing what is now Secret Rites.

AP2HYC: I’m sure it’s hard to choose, but among the cast of Secret Rites, do you have a favourite character to write or draw?

Ward: Yes. Typically, I enjoy drawing female characters. But I did love drawing Hades in this story. Admittedly, I’ve taken a slightly softer, more feminine approach to his features. I also really enjoyed drawing Hecate and creating her character. She only shows up in one page, but it’s one of my favourites. I suppose I’m partial to the darker, chaotic characters.

AP2HYC: Your Kickstarter campaign features bonus art by Katie Fleming, Kay Baird, and Katherine Hemmings. Do you usually like to collaborate, like you have here, with other writers and artists? Or do you generally prefer to work alone?

Ward: I’ve collaborated on other projects previously. But this is the first time I’ve had others collaborate on my own project by including pin-up artists. I would definitely like to do more in the future. It’s been a lovely opportunity to connect with fellow artists I may not have otherwise, and also have them share their take on the characters. Having such brilliant but different art styles in the book just makes it even better. It’s always been a feature I’ve appreciated when reading a comic book.

AP2HYC: Greek mythology is a popular starting point for comics. What do you think draws you and so many others to that arena?

Ward: They are tales as old as time, but there is always something new you can explore with them. After all, everything is so mysterious and unknown that I think we like to play with—and come up with our own stories for—these great and foreboding gods.

AP2HYC: Are there any other ways you indulge your appetite for mythos?

Ward: I do have a big love for mythology and folklore. I love reading different stories from all over the world, whether it’s the Poetic Edda or Russian fairy tales. That’s my constant go to when I see books and comics.

AP2HYC: What’s the comic that you find yourself returning to again and again, or recommending to others the most?

Ward: Becky Cloonan’s By Chance or Providence. It’s actually 3 stories which make up a trilogy steeped in mythos and folklore. They leave you wanting more in a very good way; it’s romantic, dark and mysterious. Also, I’m always fangirling over Cloonan’s linework. It’s definitely a book I’ve recommended and gone back to many times.

AP2HYC: What’s something that you’ve learned while working on Secret Rites?

Ward: The whole process of making this comic has been a learning curve for me, from script to lettering. I started illustrating the book in 2019. But my art has changed and improved a fair bit since then. So, I went back and changed a few pieces I had previously completed. My first comic Scavengers is a silent comic; I managed to create a story without having to do any lettering other than the intros which I hand-lettered. Learning to letter Secret Rites has been a really fun journey for me, though a slow one.

AP2HYC: If you were creating a playlist to pair perfectly with Secret Rites, what would be at the top of the list?

Ward: I enjoy listening to a lot of soundtracks whilst working. The God of War OST has probably been the main one. But I also discovered Hadestown, the musical by Anaïs Mitchell, whilst creating Secret Rites. It’s a different Greek Tragedy and more modern. But I still found it quite fitting. I would have both of those at the top.

AP2HYC: Do you have future plans for Secret Rites, or do you feel a new project is on the horizon?

Ward: Secret Rites is a one-shot so there are no sequels planned. Not to say, I wouldn’t be interested in exploring the mythos a little more. I’m actually wanting to go back to my Inktober project from yesteryear and explore mythological beings from different cultures and religions. My main aim for comics is to do more collaborations in the near future.

You can learn more about Secret Rites on its Kickstarter page, or purchase it here. You can find out more about Ward, including a glance at some of her fantastic art, on her Twitter. Did the interview pique your interest? If so, let us know in the comments or send us your thoughts on Facebook or Twitter!