Home » Teens And Powers In The City Of “Square One”: In Conversation With Creator Rodney Laibahas 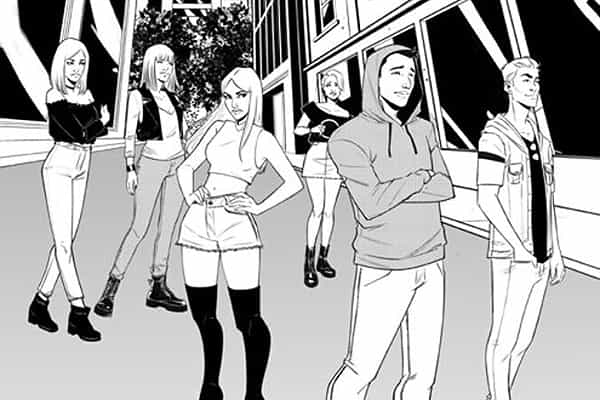 Square One is a new series from SouthEast Comics. It features six teenagers discovering new abilities and powers in a world with more danger than meets the eye. We caught up with writer Rodney Laibahas to glean more information about the recent release.

A Place to Hang Your Cape: Where did the idea for Square One come from? What are you most excited about it?

Rodney Laibahas: The idea came when I was reading the news that my all time favorite video game – Final Fantasy VII – was getting a remake. I immediately thought, how would Midgar look in the first place if it was built from scratch? That’s when my own idea of creating a new series began. Square One has been a dream of mine for the last couple of years. What excited me the most was the possibility to create an entirely new world; the concept of six high school teens who are complete strangers to each other. It’s fun to see them bond after they are all accidentally exposed to an energy source at the same time.

AP2HYC: It sounds like the world behind Square One has been on your mind for a while. What more can you tell us about this backdrop? And what about the mega corporation Plant Corp?

RL: I wanted to do a comic for a while that involved high school teens. Because it somewhat reminds me of the interactions my daughter of almost 17-years-old has with her friends. The erratic behavior; that feeling of having your life ahead of you without thinking about anything else but yourself and your friends. That, plus the fact that I just simply love to explore what a normal teenager would do when they get special gifts. This ignited something in me to write a new series.

We can find Plant Corp headquarters in the fictional city of Square One. It’s run by CEO Alexander Plant, whose goal is to be the sole deliverer of power and energy to Santopia. His private army and scientists have discovered that the power source “Magna Core” is the solution to all of this. Plant wants absolute power. But to be able to do this, he has to form an unpleasant alliance with an organization with a hidden agenda.

AP2HYC: Where did the inspiration for your six protagonists come from and how have you made them unique?

RL: I get it from several forms. Reading comics and books; watching series and films; just looking around. In real life, I’m an introvert. So often, I listen to people’s conversations around me to hear the beats in their dialogue with each other. I’m also listening to my daughters stories about how the group dynamic works with her friends and the diversity of it all. Of course, I also go back to when I was a teenager. That helps to make a cast of diverse characters.

AP2HYC: What has been different about working on Square One compared to your previous projects like ALFA?

RL: In short, ALFA was a hobby project. Square One is a comic book mini-series with a professional approach to it. But the long answer is, ALFA started out as a fun way to see if I could ever get it published. To my surprise, I was able to do that. Five issues in, and the final one is at the coloring stage as we speak. I wrote the scripts once, sent it to my letterer who happened to do some light copyediting. I never looked back.

Over the next couple of years, I realized I wanted to get more serious as a writer. I wanted to make fresh, quality stories. So I’ve written the scripts for #1 through #4 of Square One. After sending it to three editors, I’ve rewritten the scripts four or five times! Just to make it perfect like I want it to be. I’m still making little adjustments on #2, #3, and #4. I love doing that.

AP2HYC: Who else is working on this with you, and how did you find them? What is your collaborative process like?

RL: The creative team for the first issue consists of Valentina Pinti doing the lineart, and Agnese Pozza handling the colors. Marco Della Verde is for lettering, while Lee Newman, Carrie Cuinn and Hannu Kesola are responsible for the edits. I had a certain style in mind so I looked for European artists. I eventually saw Valentina’s and Agnese’s portfolios and pitched them the idea of Square One. Luckily, they were interested to collaborate on this project. After she receives the script, Valentina starts doing rough sketches of the pages. She emails it to me for approval. After that, she finishes the pages. I’ll do another check-up to see if a panel needs revision. After that, it’s sent to Agnese. It’s very important to work with an artist team that delivers.

AP2HYC: It sounds like you had a clear vision in mind for Square One when you were assembling the team. When did you know the idea for Square One was really the one to pursue; how did you go about changing parts you weren’t as confident in?

RL: Yes, that’s right. For some years, I had tons of amazing stories running through my mind. But since 2017, I was able to filter that. At the top of my to-do list was Square One; it is a story I need to tell and share with an audience. I even fine tune it now because of everything going on in the world. Square One touches upon themes that are all too prevalent in our everyday lives; loneliness, loyalty, humanity versus technology, and love. It’s all applicable since a lot of teenagers are experiencing this. I read my scripts a couple of times and if it feels too vanilla, I simply “kill my darlings,” so to speak. I also go ask for some advice from one of my editors.

AP2HYC: I asked a bit before about the inspiration for the teenagers, but who are these kids? What about them can you introduce to us?

RL: Nate Wijaya is socially awkward and is a victim of bullying in his school. He comes from a middle class family and he’s friends with his social humanoid robot, Jacob. He likes to work on fixing up the motorcycle he got from his dad to forget his high school life. Isabella Bellina is always cheerful and likes to do good things for people. This keeps her going as she is in the midst of her parents divorcing. She chose to stay with her father and is best friends with Maki.

Amy Garnett is the typical rich kid used to getting everything she wants. She’s the daughter of a social media entrepreneur and she models for a famous Santopian water brand. She got kicked out from two private schools and attends a public high school now. Amy uses medication to temporarily stop her from hearing the voices in her head. Daimon Lynch is used to doing things on his own. This is because his mother has never looked back at him ever since she entered into a new abusive relationship. The boy comes from a poor family and has a problem with authority. He is a self-described ladies’ man.

Jada Johnson is the new kid in Square One city and she misses her old town where she grew up in. She’s struggling to start a new life, and she feels her parents only care for her little brother who has a mild form of autism. Nonetheless, she loves him. She’s quite skeptical and often thinks out loud. Maki Nakamura is a strategist who always plans ahead. She’s protective about those she cares about and always fills in a leadership role on several occasions. For unknown reasons, she gets irritated whenever Amy is near her.

AP2HYC: Is there anything else you would like to share about your work? Any tips or encouragement for potential writers about getting into the comic world?

RL: Start small. Do a couple of 4-paged short stories. Collaborate with artists and see what you like and dislike in the process. The feeling of accomplishment of finishing a project is very important, before you move on to a 22-or-32-paged comic book. Pitch your work to indie publishers, before moving on to the big leagues. But most importantly, never stop writing!

To purchase Square One, and for more information on other SouthEast Comics’ projects, check out their website. If you read and like it, sound off in our comments or send us your thoughts on Facebook or Twitter!