Home » The Legacy of The Shield: Predictions for The Falcon and the Winter Soldier

Marvel and Disney+ decided to give us a Superbowl Sunday present and released an official trailer for The Falcon and The Winter Soldier on February 7th. The trailer gives us quite a bit of eye candy, with promises of fun banter and action-packed sequences. Now that we’ve got two trailers, let’s go over what we know about the miniseries, and what trouble our heroes will have to face.

Who’s In The Suit?

In Avengers: Endgame, Steve Rogers hands his shield to Wilson, implying that he’d like Wilson to become the new Captain America. But based on the trailers, Wilson hasn’t quite taken up that offer. Neither has Bucky Barnes, who Wilson teams up with. So who exactly is the guy in the Captain America suit parading down the football stadium in this shot? 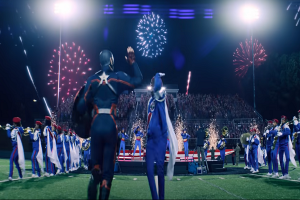 That’s U.S. Agent, according to the cast list. Comic book fans might remember John Walker as both Super Patriot and Steve Rogers’ successor. Hollywood Reporter describes John Walker as “more hardline and violent than the original Cap”, and that he was the U.S. government’s top pick to become Captain America after Rogers passed the mantle. However, Walker “didn’t last long in the job but remained a government agent under the name U.S. Agent, eventually becoming a respected hero inside the Marvel Universe and a fan favorite in the real world”. Judging by the trailers, it appears Walker’s introduction into the MCU will follow the same idea. So why is Walker here and not Wilson, since Rogers picked him specifically to fill his shoes?

“The Legacy of That Shield Is Complicated”

Sam Wilson says it best in the first few seconds of the December 10th trailer. Based on this quote in the first trailer, he might have some worries about picking up his best friend’s shield. Maybe he holds some doubts about doing Steve’s legacy justice, or maybe he just doesn’t believe he’s the right man for the job. It wouldn’t surprise me if he doesn’t end up becoming the new Captain America by the end of the miniseries. So if Wilson doesn’t step into the star spangled outfit, who will? Personally, I always thought introducing Bucky as the new Cap would make a lot more sense. Redemption arc, anyone?

But even that theory may take a different turn. Perhaps it’s not a question of who will become Captain America, but rather a question of how they both carry Steve’s legacy in their own way. The second trailer shows Wilson throwing Steve’s shield while Barnes catches it, and we also get a shot of Wilson with his own Falcon-themed shield later in the second trailer. Maybe this is teasing that they’ll both be Captain America, or at least carry Steve’s legacy together. The latter would be heartwarming, considering these two have a strained relationship to say the least.

The trailers introduce us to two main antagonists, one of which we’ve seen before. Daniel Brühl will reprise the role of Helmut Zero, the terrorist mastermind that sought to destroy the Avengers during Captain America: Civil War. In the second trailer he announces that he still wishes to destroy all superheroes, as they “cannot be allowed to exist” and he “has no intention to leave [his] work unfinished”. His return will mark an interesting goal for Bucky Barnes, since during Civil War Zemo tried to frame Bucky for murdering T’Chaka, the former leader of Wakanda. Bucky still might have some resentment about that frame job and want Zemo jailed or killed more than anybody else.

But that’s not exactly what the first trailer tries to tell us. Zemo and Bucky are actually shown together in a short shot, though it’s a detail that’s easy to miss. Bucky’s mechanical hand drops some bullets while Zemo watches with a strange expression. According to Erik Voss of New Rockstars, it could be Bucky “dramatically refusing to work with Zemo”, but based on the first trailer alone it’s not quite clear. Dropping ammunition could be a sign that Bucky doesn’t intend to harm Zemo, at least not in this encounter. Maybe Bucky wants to extract information out of Zemo about how he escaped, or perhaps about the secondary antagonists. 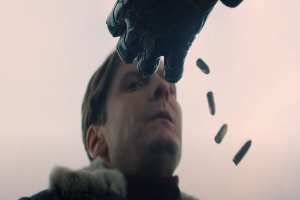 Speaking of which, Helmut Zero’s not the only villain joining the party. We’ve got a new group to look forward to, an anti-patriotism gang known as The Flag-Smashers. They’re seen actively fighting Bucky and Sam on top of a moving truck, and it’s very possible that they’re working to free Zemo from his prison. We don’t know too much about their goals, but I think they’re going to go after U.S. Agent at some point. Perhaps they believe that a government-assigned Captain America goes against the hero’s standards, or maybe they’ve got a better candidate in mind. If they’re working with Zemo, maybe they’ll recommend him for the job.

Either way, both villains directly conflict with our main heroes. Whether they work together or against each other is still unknown, but I’m guessing Zemo and The Flag-Smashers will have some common interests. I’m looking forward to seeing their chemistry if they do join forces, and if they don’t, I’ll be excited to see if they try to break Bucky and Sam apart. They’ve already got a strained relationship, so it’ll be interesting to see if fighting side by side against a common enemy brings them together or pushes them further apart.

The Falcon and The Winter Soldier will begin streaming on Disney+ on March 19th, 2021. It’ll be six episodes long and feature Anthony Mackie and Sebastian Stan reprising their titular roles.

Are you excited for The Falcon and The Winter Soldier? Who will take up Captain America’s legacy? Sound off in the comments or send us your thoughts on  Twitter!