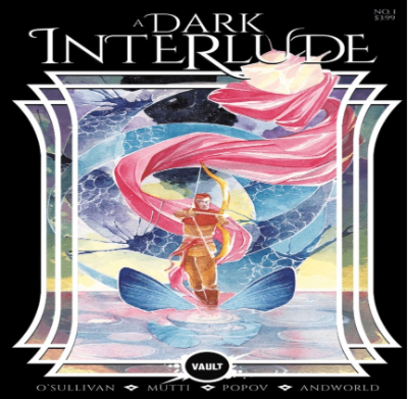 Where do we begin? Ryan O’Sullivan’s A Dark Interlude #1 is an ominous journey into the mind of a murderer. He happens to be our narrator, and a borderline sociopath. Henry Henry’s resume also includes plagiarism and his current stint at a mental institution. While he may not be the narrator we need, he is the narrator we have. Having a storyteller like this is daring in its own right; the beginning of O’Sullivan’s work is unlike anything I’ve ever seen.

But before all of that discussion, it’s important to note that this is a sequel. Of some kind. Or not. Because you cannot trust this narrator! The plot deals with the aftermath of Fearscape. But it’s not a sequel – according to Henry Henry. Because he hates the unoriginal idea of a sequel! Still, it stands out on its own, and full context of the plot of Fearscape is not at all necessary. Published by Vault Comics and illustrated by artist Andrea Mutti and colorist Vladimir Popov, A Dark Interlude #1’s cover is done by Ariela Kristantinia. Mutti and Popov also do a great job at clarifying when we are in the fearscape or on earth; they give this fantasy world a distinctive violet sky.

O’Sullivan begins his graphic novel with the longest section of text I’ve ever seen in a comic; a written confession by Henry Henry of his past crimes and his future commitment to “be present for the consequences of his mistakes”. He attempts to accomplish this by narrating the aftermath of his sins. However, Henry is as unreliable of a narrator as ever as he explains the plot. Agh, this is a very hard comic to put into words. But, to clarify, Henry at one point in the past was a hero through his storytelling. This is where the fantasy aspect comes in.

The narrator does his best to get us familiar with the “fearscape”. Henry describes this realm as “a world beyond our own, populated by the sentient personifications of the things we fear most”. These sentient evils follow “the greatest of all fears”. This comes in the form of many entities, depending on the century. To defeat this chief of fear, a “muse of Greek myth” must search and find the greatest storyteller. This chosen one must battle and slay this threat and then write an inspirational text. The storyteller’s work will bring humanity into “a new golden age” until another chief of fear comes along.

Henry was the chosen storyteller to enter the fearscape. But it turns out, he was a fraud! Having plagiarized the work of Arthur Proctor, he also murdered Arthur and tried to do the same to his family. Arthur and Henry’s relationship is even more complicated than it seems. But that’s something that you’ll have to find out for yourself! Because of Henry, there are characters in both worlds dealing with the consequences of his actions. The Proctor family attempts to move on from the past, and the characters in the fearscape search for a new storyteller. All the while, Henry is in a mental institution.

It’s funny because a number of times, Henry notes how lucky we are to have certain narrative coincidences because of him. But he’s the biggest inconvenience of them all! That doesn’t make A Dark Interlude all the less entertaining. It’s a bumpy, chaotic, but enjoyably ride that makes you wonder whoever Henry’s therapist is, they’re not earning their paycheck. Overall though, if you’re into fantasy, horror, and want to step into the mind of a guy you wouldn’t want to see in a dark hallway, give this series a chance. Whatever happens next to Henry and company is certain to be shocking, confounding, and dark.

Have you read A Dark Interlude #1 yet? What did you think of it? If you haven’t, check it out at Comixology! Then let us know on Twitter and/or Facebook what you thought!