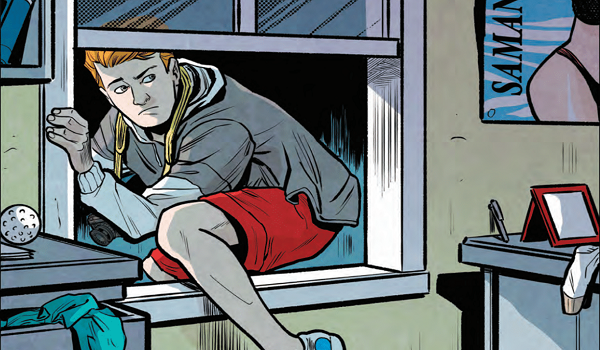 Our main characters are Danny, Jeff and Mark – a group of freshmen boys in high school. The year is 1989, and Jeff recently moved to the planned community with his dad. Jeff, Mark and Danny become fast best friends; Jeff attributes the story’s bizarre and exciting events to meeting Danny specifically. These are the two boys we follow the most, with Mark as an eventual addition and Amy getting sidelined halfway through Chapter 2.

The three boys are in the middle of a grand plan to scoop some dirty magazines out of a dumpster. In the heat of the moment, Jeff jumps into the dumpster just as the garbage truck driver is about to take out the trash. As a result, he hits gold with the magazines. But he also discovers a child’s dead body. Surprising to say the least! Afterwards, Jeff explains what he saw to the others. However, no one believes him. So they go their separate ways, and Jeff is grounded after getting into a fight with his dad.

Jeff sneaks out during the night so he can go to the dump and investigate further. He cites that they were just “two kids no one cared about”, and that he wanted justice for both of them. Danny surprises Jeff outside and the two agree to search the dump together. They overhear the garbage truck driver talking about locking kids up in a shack on the hill. The two bust in and find a secret door under a rug. As Danny puts it, these villains are “textbook Scooby”.

They head down into the secret basement and find a ton of robot body parts. Their bodies are hanging from the ceiling like Christmas lights, and that clearly freaks them out. But what’s scarier is that they find a corkboard with pictures of missing kids tacked onto it. Danny says that he knows a bunch of them, and that they were all delinquents and bullies back in the day.

After digging up some files, they discover that the garbage truck driver is kidnapping and killing these kids, and replacing them with robots. Danny also digs up Jeff’s bag and photo from the pile. As he does so, he comes to the realization that Jeff’s next. And that’s where the comic ends. That’s right—it’s a cliffhanger! 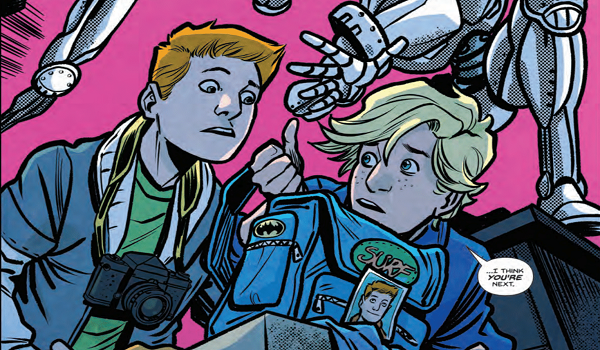 The story is entertaining, and it reminds me of Stranger Things – a bunch of weird kids get in over their heads with something that almost defies reality. The futuristic yet nostalgic setting plays into the mystery. Even the art style is close to that of a superhero comic. Every page packs a vibrant yet professional look. The cover and the team portraits have to be some of my favorite parts! The cover looks like a fun 80s horror title, and some of the team portraits are robots. I wonder if anyone’s caught on to the sudden change?

While Danny and Jeff are our main protagonists, there are also a bunch of side characters. Mark and Amy are Danny’s friends, Mr. Kolisnyk and his unnamed friend are the villains, and Jeff’s dad makes a short appearance as well. Mark and Amy get an entire two chapters of screen time, yet we find out surprisingly little about them. Amy’s your stereotypical confident young lady, and Mark seems like the nerdiest of the bunch. I hope to see more of them in the second issue!

Jeff’s dad is a cop, and his appearance reminds me of J.J. Jameson from Spider-Man. We learn that Jeff’s mom left them, and Jeff thinks it’s because his father doesn’t trust anybody. It’s sad to see them fight, and I’m anticipating their reconciliation in the second issue as well. Maybe Jeff will confide in his dad about the murders and get professional help on unraveling the case.

The characters are fun, but in such a short comic, it’s hard to give everyone the spotlight they deserve. I hope the second issue brings them all forward a bit more! Overall though, Electric Youth #1 is a promising first addition to a short comic series. The pacing is fast and packs a murder mystery into a nostalgic teenage experience. I’d highly recommend checking this comic out if you can! After all, with the year we’ve been having, a trip down memory lane might just be what you need.

Have you read Electric Youth? If not, does nostalgia hit home for you? Because if so, you can check out Electric Youth #1 here. Then let us know in the comments or send us your thoughts on Facebook or Twitter!