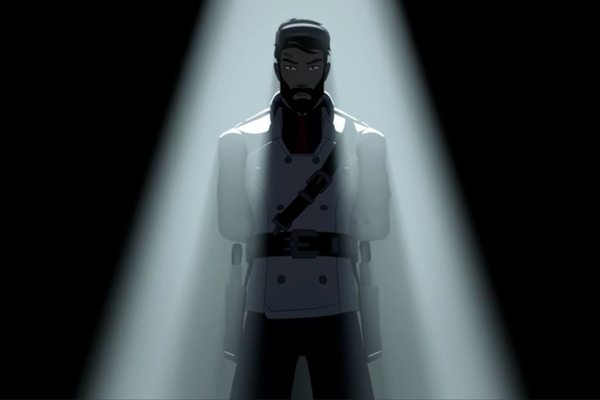 RWBY’s eighth volume returns once again after a week’s hiatus, due to the awful wintery conditions that struck Texas recently. Needless to say, things were in dire straits, forcing Rooster Teeth to delay episode ten’s release by a week. It has been a particularly hard year for the CRWBY, working from home due to Covid-19, and then left in freezing temperatures with little to no power or resources. It made perfect sense for them to delay the episode. Turns out, “Ultimatum” may be the best episode this volume.

The episode hits the ground running with the spectacular explosion of Monstra, courtesy of Oscar using the stored magic of his cane, the Long Memory. The sequence is mesmerising to behold, thanks to the superb animation, lighting, and music. We can assume that Hazel, who betrayed Salem last episode, died in the explosion, though Salem will return. Neo is seen skipping merrily through the remains of Monstra, carrying the Relic of Knowledge in hand. Winter and the Ace Ops assume Yang, Jaune, and Ren died in the explosion. General Ironwood, who is increasingly becoming more unhinged, summons them back to Atlas Academy.

On a rooftop, Cinder and Watts consider their options. Cinder still plans on killing Penny to acquire the Winter Maiden’s magic, but Watts chastises her, telling her that he implanted a virus in Penny that will force her to open the Vault. But, when he mentions the “self-destruct” part, Cinder resorts to dangling Watts off the roof. She announces her plans to drop Watts to his death, burrow her way to the Vault and wait for Penny to show up. Watts, despite facing potential death, finds the whole plan hilarious.

In perhaps Watts’ finest hour, the scientist chews out Cinder for her blind arrogance, disregard of following orders, and continued incompetence. He berates her belief that she is entitled to power because she suffered, but truly requires intelligence and worthiness for such gifts. As he puts, Cinder has been a “bloody migraine”. Cinder looks ready to kill Watts, only to dump him back on the roof, sits on the ledge and cries.

It is about time someone called Cinder out for her impulsive greed. As her backstory revealed, Cinder has taken the easy path so to speak to acquire power, stealing it rather than earning it. As such, her repeated failures have been caused by her own hubris. Going forward, she may develop a smarter manner of performing her missions. But, first, she must deal with Neo, who sends her a trolling message, offering the Relic, though only when Cinder commits to what was promised – i.e. revenge on Ruby.

Yang and co. survived, including Oscar, making contact with the rest of Team RWBY, and are given a route to reach the Schnee estate. The group head underground through a tunnel, debating on what to do with Emerald. Oscar and Ren vouch for Emerald, though Yang points out that Emerald is partially responsible for the loss of her arm and the fall of Beacon. Oscar then brings up the return of Professor Ozpin, defending his counterpart for protecting him, taking the brunt of Hazel’s torture. Oscar wishes to reciprocate Ozpin’s trust in him, hoping his friends can trust him as well.

The group pass through the underground bomb shelters of the Atlesian citizens. Emerald shows signs of grief for Hazel, but also guilt for the terror brought to Atlas. Oscar tells her that her talents could be useful in the fight against Salem. Emerald suggested earlier they should just leave, all but done being involved in the war. She primarily defected out of fear, but there may be hope in Emerald joining the heroes. Alternatively, she may return to Cinder out of her devotion to her, team up with Neo, head for Vacuo to find Mercury, or just exit out of the chaos altogether. There is a lot of potential for her character arc.

The same can’t be said for Ironwood. Winter and the Ace Ops return, informing him of Monstra’s explosion without needing to use the bomb. Ironwood still plans to use it, wishing for Penny to go to the Vault, though the jailbreak has only put him on edge. He asks Winter to bring Yang, Jaune, and Ren to him, intending on using them as leverage to gain Penny’s obedience. Harriet then decides to announce that Winter let Yang and co. leave, enraging Ironwood. He is then informed that Schnee Dust Company ships are heading for Mantle, inspiring him to make an important phone call.

Team RWBY and Team JNPR are finally reunited at the Schnee Manor, including a blushing reunion between Yang and Blake. Just as Ren inquires about Nora, and Ruby is about to leap on Emerald, they receive a call from a panicked May Marigold, who reveals the SDC cargo ships arrived at the crater, but they had company. The call ends just as May shouts for the refugees to evacuate into the mines.

An emergency broadcast is aired to the whole kingdom, showing Atlesian ships blowing the SDC cargo planes out of the sky. Take three guesses who is behind it. Ironwood has completely flipped his lid, standing in a dramatic spotlight, addressing Penny directly (as the Protector of Mantle), giving her two choices. Either she can return to Atlas willingly, and leave Mantle to fend for itself, or Ironwood will use a bomb to blow Mantle sky high. The old kingdom will also be nuked if anyone tries to intervene, and Penny only has one hour to comply.

It was said that the second half of Volume Eight was going to be more grimmer than the first, and Ironwood just delivered that in his most chilling moment to date. With our heroes reunited, the fate of Atlas lies in their hands, or rather, in Penny’s. This volume has had a heavy emphasis on choice, as well as the consequences on making them. Cinder’s revelations may inspire her to change her methods. Emerald’s defection from Salem opens a lot of roads to take, contrariwise to Ironwood, who sprints onwards down the slippery slope of instability. These moves, countermoves, and changes of allegiances look ready to clash as we head into the final episodes of RWBY Volume Eight.

What were your thoughts on the episode? What choices will be made? Leave a comment below, or on our Twitter feed!