Home » RWBY: “Worthy” Is An Intense, Wild Ride of Consequences 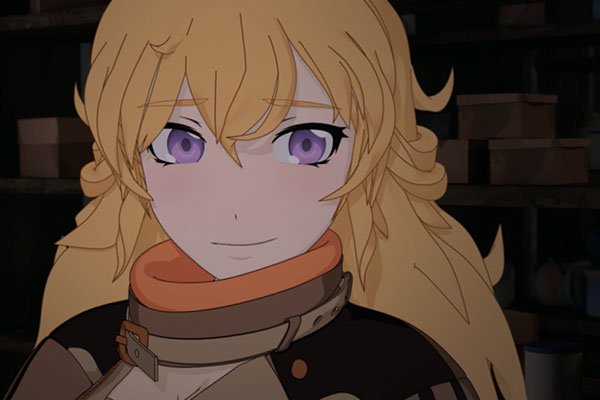 The penultimate episode of RWBY’s eighth volume strives to up the stakes as it hurtles towards the finish line. In the last episode, Ambrosius, the Relic of Creation’s spirit, turned Penny into a real girl, and set up a portal system to send everyone from Atlas to Vacuo before the city falls. The second half of Team RWBY’s evacuation plan is not without its flaws, which are exploited to the furthest degree in one of the most exciting episodes of the series.

The plan to evacuate the entire populace of Atlas to Vacuo appears to be off to a good start. Ren, Oscar, and Emerald are to lead civilians into Vacuo, whilst Jaune, Nora, and the Happy Huntresses act as traffic wardens. It appears Penny and the Relic can exit the portal dimension without the system collapsing. Nora also notes that Vacuo will not be ready for the enormous amount of negative energy created by the frightened civilians, though Ren has that covered by masking their emotions. But, when Ren, Oscar, and Emerald exit through the Vacuo portal, they walk straight into a sandstorm, with communications blocked, and the portal being a one-way door.

As said in the previous episode’s review, the decision to dump everyone in Vacuo seems like an uncertain plan. Vacuo is described as a particularly dangerous, hostile kingdom where only the strongest can survive. Imagine what could occur if an entire population from one country immigrates to another with no time for preparation, to gather supplies, or clear the way of the Grimm. Hopefully, such problems will be addressed either in the season finale on in future volumes.

Things take a turn for the worst when Cinder decides to start blowing things up, knocking a swarm of civilians into the void. Ambrosius warned Team RWBY last episode to make sure that no one fell off the pathways, though without specifying what would happen to those who do. Cinder gets into a fight with Team RWBY, making a comment that leads us directly into an extended flashback of just how Cinder knew about the plan.

Heeding Watts’ epic rant against her, Cinder tries a new approach to working with her comrades: upholding her end of their bargains. She utters a baffling apology to Neo, promising to deliver Ruby, and even helping to satisfy Watts’ desire for revenge. Neo hands over the Relic of Knowledge, Cinder summoning Jinn to ask an all-important question. The potential use of Jinn’s last question is somewhat wasted when Cinder asks to learn what Team RWBY’s plan is. Though, it is funny seeing Watts’ stupefied look of amazement. Our villains waltz through flashbacks from the previous episode, though Cinder shows no reaction to seeing Emerald with her enemies.

The strangely jovial music during this sequence builds up to Cinder, Neo, and Watts marching into Atlas’ command centre, slaughtering the staff inside. Cinder and Neo set off to get Ruby, leaving Watts to have fun with the kingdom’s mainframe, though Cinder tells him she’ll be back for him.

In the hangar, Qrow and Robyn secure the Ace Ops with Marrow’s help. Watts sends in a security robot to kill them, but Marrow shields the others from the explosion, his aura broken. Just as Atlas starts to teeter, Harriet springs into the ship with the bomb, taking off to blow up Mantle. She clearly heard the civilians are being evacuated, but like the idiot that she is, she is still willing to follow Ironwood’s absurd orders. Vine leaps onto the ship just after it takes off.

Ironwood awakens in his prison cell, learning that Atlas is falling from the snappy Jacque. Just then, Ironwood’s cell opens, allowing him to retrieve his discarded weapons. When Jacque asks if Ironwood is going to open his cell too, James delivers a particularly cold one-liner and obliterates Jacque, leaving only dust and green flames. Jacque Schnee was one of the most hateful characters in RWBY, and likely will not be missed by many. Weiss promised to move him to a safe location in an act of kindness, so there may be some sort of fallout when the rest of his family learn he died.

The most alarming action was on Ironwood’s part. His previous attempts and successes at killing characters was when they questioned his decisions. This execution was purely because he could do it. He didn’t do it to punish Jacque for his family abuse, corruption of power, co-operation with Watts, or for just being a douchenozzle. He did it because he annoyed him. Ironwood’s opportunity for redemption and to see reason are slipping away rapidly.

Back in the portal dimension, Neo at long last joins the fray to get revenge on Ruby. She attempts to ambush Ruby, but Yang sees her coming, taking the strike. It is so swift that is breaks Yang’s aura, causing her to fall off the platform. Blake tosses Gambol Shroud after Yang to catch her, but misses at the last second, Yang tumbles into the abyss.

A lot could be said about this shock, but I hardly doubt that Yang would be killed off. The dimension is similar to the Relic Vaults, and we see Yang fizzle out of existence rather than just fall into nothingness. Was she transported elsewhere? There have been a lot of theories that all four girls will fall, as implied in the volume’s opening titles, and will end up somewhere else. Ambrosius never stated what would happen if someone falls.

Ruby and Blake go ballistic and fight Neo, whilst Weiss takes on Cinder until Penny flies in for round three between Maidens. It would make sense for Penny to toss the Relic through the portal, but instead carries it on her back.

Harriet prepares the bomb to drop, but is confronted by Vine, who finally feels the order is illogical. Harriet claims that the choice is about the principal of loyalty, believing that Clover would have agreed. Vine disagrees, finally getting Harriet to open up how she feels about Clover’s death. Just as the two are about to get somewhere, Robyn flies in on her own ship to stop them. Harriet kicks Vine out the ship, forcing Robyn to divert her course in order to save him. Harriet returns to the cockpit, only for Qrow to fly through the windshield and engage her in a fight. Probably not the best place to have a fight around a loaded bomb, particularly when Watts remote-hacks the autopilot.

Winter is in the Vault chamber, unable to make contact with anybody, when Ironwood shows up to take out two Schnees in one day. Ironwood comments that he expected betrayal at every turn, but never suspected Willow would turn on him. He gives her a final order to step aside, believing he knows what is best for Atlas. Winter stands, ready to defend Atlas from its enemies, including the general. Shedding a single tear, General Ironwood engages Winter in battle, which will be a tragic one indeed.

In the final scene, Ren’s aura breaks, unable to protect the growing, stranded civilians. Oscar, realising something is wrong, tries to go back through the portal, Ozpin realising that Ambrosius did exactly what was requested: he made a “one way ticket” to Vacuo. As if things couldn’t get worse, a horde of gigantic bat Grimm show up to terrorise the Atlesian citizens.

So, we have one episode to go and a lot of wrap up. Will anyone else fall? Who will win their respective fights? How will Salem return, if she does this volume? Will Cinder finally add a second Maiden’s powers to her collection? And most importantly, what happened to Yang!? Let us know what you think in the comments below or on Twitter!