Home » “The Miracles”: In Conversation with Joe Glass 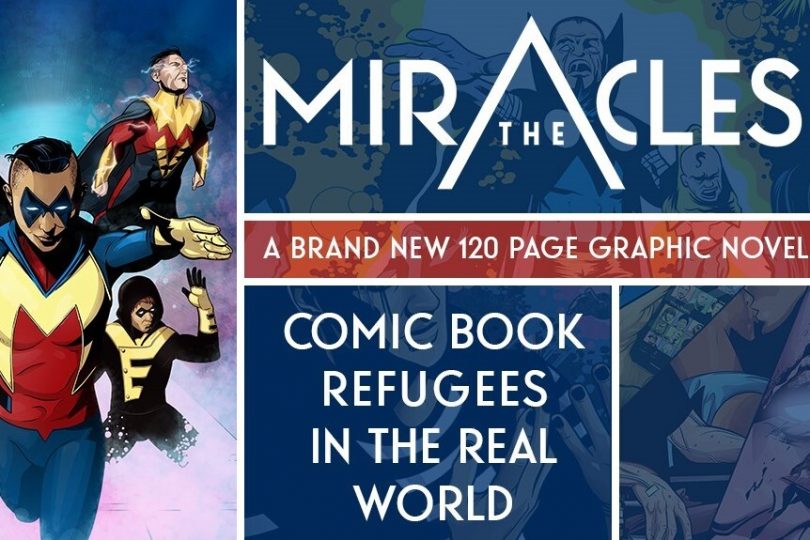 The creator of The Pride, a comic centering around out-of-the-closet superheroes, and Acceptable Losses  returns with his new comic The Miracles. So what will we encounter in this new feature? Writer Joe Glass reveals the premise, his influences and perhaps future adventures too.

A Place to Hang Your Cape: With the graphic novel still in development, what adventures can readers expect?

Joe Glass: People can expect to see a brand new superhero trying to live up to the adventures of his parents, but finding that the world is so different than theirs that it’s not as straightforward as what he thought. They can expect a hidden enemy that will make themselves known in the most shocking and explosive way. They can expect twists that they will never expect.

AP2HYC: Can you tell us a little bit more about the hero – Elliot Morgan?

JG: Elliot is dorky, a kind of wannabe social butterfly, but so wrapped up in his own concerns and fears that he’s kind of shut himself off. However, he’s very bright and positive, despite his outward appearance. Like, that look is very much an armour… which will actually kind of explain some of his powers and what he does with them. But overall, his big thing is a belief in doing the right thing if you can; that if you can help the world you have a responsibility to do so, especially in this world. Whether or not he knows how to do that is another thing.

AP2HYC: What would you say is the biggest theme behind the story, and why is it important for us as readers?

JG: I’d say the biggest theme on this story is ‘secrets’ – why do we keep them? what do they do to us and those around us? And more importantly, why do families keep secrets from each other? I think it’s important for readers simply because I think it’s what everyone can relate to – every family has secrets, even if they’re just secrets by omission or from never being openly discussed. How many times do we find out years later that that one uncle has a gambling addiction? Or that grandmother once had a job that the grandkids had no idea about? Why weren’t those things shared and talked about? Everyone, I think, can kind of understand that.

Queer readers, who naturally make up a big chunk of my audience, in particular will understand secrets in that way, as for many much of their lives have been spent ‘in the closet’ – sometimes to protect themselves, sometimes to ‘protect’ their family, but always that holding back causes problems for themselves in some way. That particular aspect is in fact actively explored in The Miracles too.

AP2HYC: You’ve said the graphic novel draws on themes from The Incredibles, The OC and Invincible. Are there any particular moments, or characters, we may recognise?

JG: In terms of The Incredibles, the whole story of a family learning about past history and coming together and working together is a big thing. And in terms of how that plays out, think about some of Invincible‘s big twist moments, without giving away too many spoilers.

As for The OC, that show is my favourite teen drama of all time – so I knew that if I’m tackling that kind of soap opera style story filled with family drama, hidden relationships and explosive revelations, The OC would play a definite inspiration. Elliot arguably has something of the Seth Cohen about him, and his brother Ayden is quieter like Ryan too (but for a very different reason) but perhaps the biggest inspiration is the behind the scenes machinations, and family not being wholly upfront with each other when in trouble. Much more than that, and we’ll be heading into spoiler territory.

AP2HYC: Is it fair to say that some of the themes found in The Miracles; of living in a new, foreign place and nationality connect with current society? Can you expand a little more about why we see this theme?

JG: I think so. It came up in the process of production and seeing things going on in the world today, and it occurred to me then that in a way I was telling a story about a family of refugees. We touch on this a little throughout the course of the book, but it really comes into the forefront later on in the story, so it’s hard to discuss without spoilers. However, the idea of a family trying to make a better life in a new place (and how that new home may view people it considers outsiders) is definitely there, and I think it’s important that we see this as it’s an important part of our world today.

AP2HYC: Are we likely to see more of The Miracles in an expanded universe?

JG: Maybe not so much an expanded universe, but I definitely have plans for more of The Miracles family. For now, the book on Kickstarter is a full story and self-contained enough that if it winds up all there is, it will be a satisfying story. But I have other ideas for the story that would make up a trilogy of OGNs. So hopefully, we can explore those down the line too.

AP2HYC: Can you tell us a bit about the creative team behind The Miracles?

JG: Me and Vince Underwood had been talking about maybe doing something for a little while, before I showed him The Miracles, and he did some designs that were just perfect for it. Honestly, he’s throwing his all into the project and the work that he is producing is absolutely astonishing, so I think people should be very excited to see what he has to come. Harry Saxon‘s colour work is so wonderfully layered, it works perfectly with Vince’s linework. Hassan Otsmane-Elhaou, well, I just met him at a comic con in I think 2019 – I knew him, of course, but now I finally got to meet the person and he was one of the most chill, friendly, awesome people I’ve met, so I knew I wanted to work with him someday.

AP2HYC: What advice would you give to creators who are crowdfunding their first comic?

JG: This may sound odd given I’m currently running a £35,000 campaign, but this is my ninth campaign too. But my advice to new creators is start small. Just do a single, self-contained ideally, 20 page comic book, something where you can keep the goal as low as possible. If you have savings or free cashflow, put that into your project as much as possible first and then plan your goal. Anything you can do to keep that goal down, as that first campaign your biggest hurdle is creating yourself an audience.

If Joe Glass’ justice for representation and equality is a cause you can back, visit his website here and be treated to his vast array of superhero comics to satisfy. For more information, check out the Kickstarter! Are you as excited as we are for The Miracles? Let us know in the comments below or on Twitter!