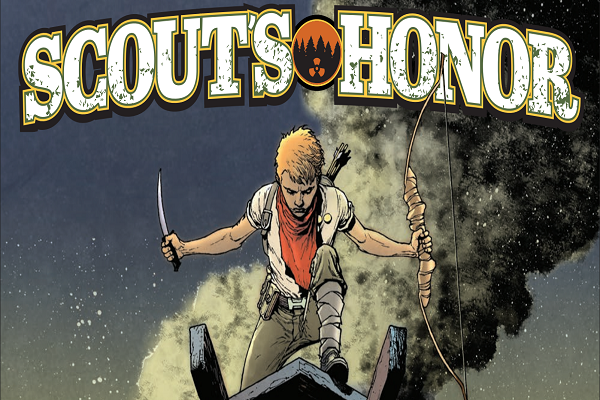 Have you ever wondered why Boy Scouts have a lot of wilderness training? Maybe it’s in case of emergencies; maybe it’s in case of a nuclear apocalypse. Regardless of circumstances, it’s very useful training; it can be applied to multiple situations. For example, let’s take that nuclear apocalypse. Scout’s Honor #1 and #2 explore a post-apocalyptic setting where Boy Scouts basically become a cult of super soldiers.

Right off the bat in #1, we’re thrown into the story and its setting. We quickly learn that the Ranger Scouts are fearless warriors that closely follow the survival handbook written by Jefferson Hancock. Everything in their society works off of Hancock’s laws. There are even badges for recognition of outstanding work. Some typical Boy Scouts badges do exist, like Archery and Wilderness Survival. But there’s also Explosives, Switchblade, and Combat Medicine badges. Ranger Scouts wear their badges proudly; in one instance, they are a form of identification. The highest badge you can earn is the Eagle’s Guard, saved for one incredibly outstanding scout per year.

Our protagonist Kit, earns the second highest badge – the Valor badge – in the first issue; awarded for her bravery and excellence in taking down a gamma boar after it killed another recruit, Eddy. However, this quickly proves a point of contention. After taking down a group of violent raiders, she discovers that the Ranger Scouts were the ones responsible for killing the very person they idolize: Jefferson Hancock. Everything she’s been working towards is built on a lie—and a dangerous one at that. 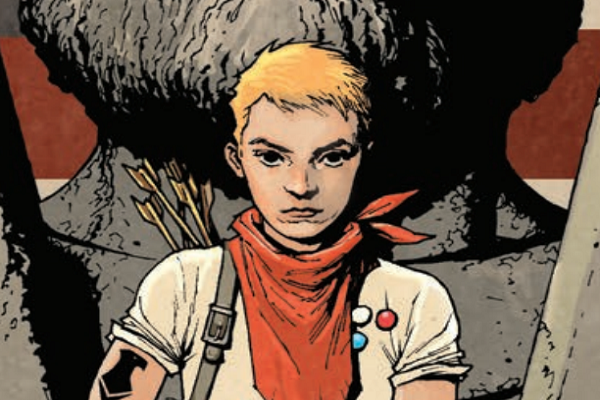 Kit learns in #2 that she’s being considered for the Eagle’s Guard. Thanks to her new knowledge about Hancock’s death, she feels conflicted about her goals. We see that she originally became a Ranger Scout to protect her father. But as a Ranger Scout, she feels personally responsible for Hancock’s death. She constantly says “we killed him” when in reality, she never did. Her heart’s in the right place, and it’ll be interesting seeing what path she decides to take.

Things really start to take off in this issue. Kit confides some of her insecurities to her best friend, Dez. They’ve got a friendly rivalry going on about who’s going to become the next Eagle Scout. However, this issue proves that Dez sees Kit as more than a friend. As far as Kit knows, Dez doesn’t know that she’s a girl. I’m excited to see what will happen if Dez figures things out and if his feelings remain the same.

That’s not the only exciting thing that happens this issue. The raiders from the first issue return in search of the drone that Kit took. It’s one with valuable information on it. Since Kit’s dad promised to look into it, they target him. Kit defeats the group in seconds, but she’s not quick enough. Kit’s dad succumbs to his injuries and dies in her arms. She isn’t given much time to grieve; the issue ends with a proclamation that the Trials of the Eagle start tomorrow. This will be a great test for her resolve, and I anticipate this will be a turning point for Kit.

Overall, Kit is a wonderful character with clear goals and struggles. It’s hard not to like her! I really sympathized with Kit once she’s revealed to be a girl. The Ranger Scouts don’t accept women into their ranks, much like how the Boy Scouts don’t accept girls. That’s what Girl Scouts are for, right? At least Boy Scouts learn all about wilderness and survival techniques. Girl Scouts sell cookies and do crafts. I remember being jealous I couldn’t join the Boy Scouts camping trip in elementary school! At least the Ranger Scouts’ training prepared them for a nuclear apocalypse.

As much as I loved Kit, her dad was also one of my favorite characters. He was incredibly supportive and concerned for Kit’s wellbeing. He didn’t question why Kit wanted a drone repaired so badly. And also, he had a wicked sense of humor. Seriously, he called a pre-war drone cuter than his own daughter! It’s clear he loved his job and he loved his daughter even more. I’m sad that he died, and I know it’ll give Kit more conflict in the future.

Aside from the characters, Scout’s Honor has a wonderful art style and concept. Kit’s art is especially pleasing since she looks entirely masculine, even after her gender reveal. I also really appreciate the alternative cover art, all of which are purchasable from the official website. There’s even pages dedicated to the different badges the Ranger Scouts can earn and what they mean! It’s clear a lot of thought went into this world.

Overall, David Pepose and the team behind Scout’s Honor truly made this concept come to life. I’d recommend this comic to fans of post-apocalyptic worlds, Mulan, and the Fallout series.

What did you think of Scout’s Honor? Are you excited for the third issue? Had any experience in Boy/Girl Scouts and curious to see what Scout’s Honor is all about? If so, you can purchase the first two issues on Pepose’s official website. Sound off in the comments or send us your thoughts on Facebook or Twitter!