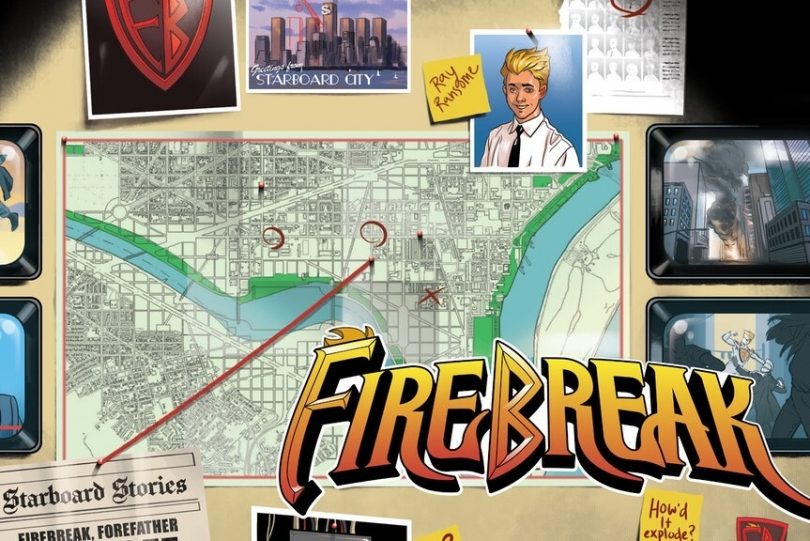 When a story starts in the middle of the action, you just know it’s going to be a fast-paced comic. Buckle up readers, you’re gonna get whiplash trying to keep up with this one! Creator Jay Pear teams up with Ryan Best and his fine artistry to deliver a creative comic about a young superhero in Firebreak.

Firstly, the scene is set with a preface that describes our hero and who he is. For instance, a brief prologue details how two years prior, he received his fiery powers from a space crystal that had crash landed on his garden. It attached itself to him. This is all we get to know of his journey to becoming a hero. Maybe more will be revealed later on?

Firebreak catapults our superhero into a trap. Surely that’s too soon? Remember, this first issue is set in the middle of the action; it’s all ready to go and keeps us on our toes to work out how these characters got into this situation. We begin with our hero, Firebreak, and his super tech-savvy sidekick, Cora. She directs him through his escapades using high-tech gadgets. Cora creates a mask for him, letting her see everything he does and hone in on any dangers he may face ahead. A very clever gadget indeed.

As he breaks into Shard’s lair to destroy the object of his weakness, a cage descends and he is seemingly unable to escape. What ensues is fiery action, a dab of chaos, and just a smidge of backfired plans. As well as the crazy villain Shard – who tries to destroy Firebreak’s powers – the issue introduces us to a power-hungry mafia man: Forefather. With images of cracked doors and buildings, we only receive hints of the destruction Forefather is capable of.

Certainly, Best’s images and colours need to be complimented here. They are clear and crisp, defining all the small details; from facial expressions to futuristic technologies that see glass panels as forms of tablets, computers and phones alike. The lettering by HdE, combined with the art, has all the familiarity about it of a traditional superhero comic. The story itself is edge-of-the-seat fun; raising questions about characters and their motives, even ending the first issue on a cliff-hanger.

What will be interesting is seeing how the timeline develops. Here begins in the midst of a grand plan. So, will there be flashbacks? Will the second issue take us back to the beginning and reveal all the events that led us here? However, there’s definitely scope for a long running series with plenty of secrets and revelations to be discovered. Overall, Firebreak has all the makings of an exciting, barrage of action and mystery that is sure to keep you hooked for more.

Have you read and supported Firebreak yet? If not, what are you waiting for? Support Firebreak over at the Kickstarter to guarantee a printed comic. Then sound off in the comments or send us your thoughts on Facebook or Twitter!