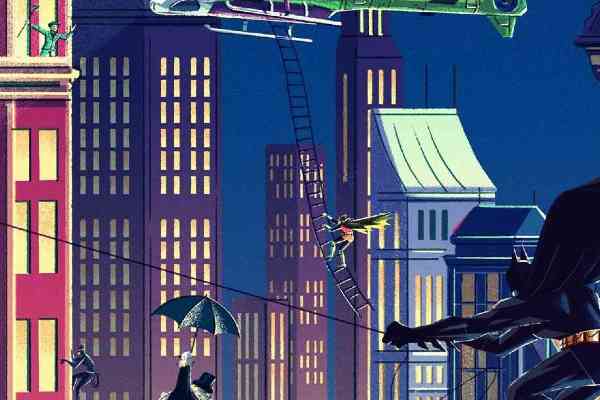 We always remember our first comics. I have vivid memories of reading single Batman stories, one random issue at a time. Remember that feeling of discovering a new hero or villain on the cover of a comic you’ve never seen before? That kind of feeling is priceless. And I still remember what it’s like learning the sheer size of the Batman universe! There’s dozens upon dozens of costumed characters and lore. In addition to that, the world is constructed by locations with all this history built around these great stories. And in comes Exploring Gotham City.

This is why I find character encyclopedias so exciting! They’d tease stories you’ve yet to read, and introduce characters you’ve yet to meet. As a new illustrated guide to the Batman universe, Exploring Gotham City takes me back to reading those same encyclopedias. It’s full of creative and charismatic illustrations, therefore reinventing the idea of a character dictionary in a really charming way. To sum it all up, Exploring Gotham City is a brilliant all-ages introduction to Batman and his cavalcade of characters.

We’re introduced to Gotham location-by-location on a tour around the city: the Batcave; Wayne Tower; Arkham Asylum; the Narrows; Crime Alley; Amusement Mile; Burnside. And these are just to name a few! Each and every location gets a gorgeous two-page spread with fun details, Easter eggs, and annotations explaining the history of Batman and his most famous stories at said location. Furthermore, we dive deeper into the lore of Gotham from decades before.

The work behind Exploring Gotham City is incredible. Firstly, Studio Muti have done a wonderful job with the art, capturing a comic book-art deco aesthetic. With the book’s size, some references can be so small and easy to miss. As a result, these details really sell the idea of Gotham as this labyrinthian wonderland. Secondly, Matthew K. Manning as the writer doesn’t falter. He has an infectious enthusiasm for this history and its connections to Gotham’s colourful characters. For example, Manning pulls from years of stories to craft a congruous history and picture of Gotham. He describes this lore with a fervent whimsy which is very familiar to all classic Batman adventures.

Because of the great effort behind the scenes, you end up with lots of culture drops to iconic books and eras. There are mentions of storylines from Tom King’s recent run, as well as from Scott Snyder and Grant Morrison. We have references to Year One, No Man’s Land, War Games and Knightfall. There’s a wink and a nod to Batman: White Knight and the Arkham games. And we even have a mention of Slam Bradley from Ed Brubaker’s Catwoman! I’m sure there’s are plenty that even I have missed.

If you’re already showing a younger reader something like Batman: The Animated Series, this should be appropriate. Exploring Gotham City will put them on the scene of so many terrific stories. It’s also going to be an introduction to lots of periphery heroes who have been sidelined in DC’s current books. From Bluebird, Batwoman, Duke Thomas, Spoiler, to Cassandra Cain; as a fan of these characters, it’s really rewarding to see everyone get a bio.

While certainly geared towards younger readers, older Batman fans like myself should get a kick out of Exploring Gotham City too. For one, it’s a big book; it’s a delightful talking point to have out on a bookshelf alongside other coffee table superhero books you might keep. Overall, Exploring Gotham City is a wonderful way to revisit the city if you’re an older fan, or to discover the city if you’re brand new.

Interested in taking a look at Exploring Gotham City for yourself? You can grab a copy either at Amazon or ForbiddenPlanet. Don’t forget to sound off in the comments or send us your thoughts on Facebook or Twitter!