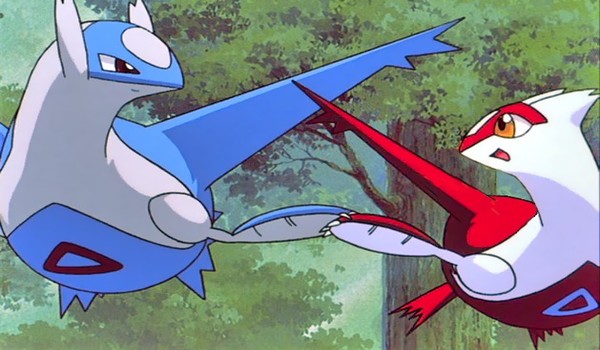 Our tour of the Pokémon world continues with a visit to the Hoenn region. In these articles, we are exploring the geographic, historical, and mythical inspirations behind each Pokémon region. Hoenn is the setting for the third generations, Pokémon Ruby, Sapphire, and Emerald, as well as the remakes Omega Ruby and Alpha Sapphire. The information in this article mostly comes from Bulbapedia.

Hoenn is based on the Kyushu, Japan’s most southern island. Kyushu has a warm climate, home to hot springs and Japan’s most active volcano Mount Aso, but is surrounded by a vast ocean and has many islands. This suits the themes of Hoenn’s Pokémon: people, culture, and environment. Hoenn has many striking environments and locations, where land and the sea are of equal sizes. There is a sense of unity with nature, especially between mankind and Pokémon. Hoenn’s name, according to game designer Junichi Masuda, can be translated as “abundant relations”, referencing the relationships forged between trainers and their Pokémon.

In the games’ lore, Hoenn was created by ancient Pokémon named Groudon and Kyogre, who raised the landmasses and oceans. Like two stroppy neighbours, the two legendaries fought, until the sky dragon Rayquaza broke up the fight, banishing Groudon and Kyogre to deep caverns to sleep for an eternity. Centuries later, the evil Team Magma and Team Aqua wish to revive Groudon and Kyogre separately, in order to change the face of Hoenn. Groudon, Kyogre, and Rayquaza make up the “weather trio”. They personify the land, ocean, and sky, further taking inspiration from Behemoth, Leviathan, and Ziz, great beasts of Biblical and Hebrew origin.

Our player character is either May or Brendan, who live in Littleroot Town. In a first for the games, the player’s father is Norman, the Gym Leader of Petalburg City. Littleroot is based on Sasebo, a city that appears to have affinity with nature, being a part of the Saikai National Park. Littleroot is a secluded village overshadowed by nature, whilst its neighbour Oldale Town is slightly larger and open spaced. Oldale is based on Saga, which is best known for its International Balloon Fiesta.

The player must rescue Professor Birch from a wild Poochyena, choosing their starter Pokémon: Treecko, Torchic, or Mudkip. Birch prefers to be out and about in nature than in his laboratory.

Petalburg City is the location of Norman’s Gym, and where the player meets their rival Wally, a meek, sickly boy. It is mentioned the city smells of sea salt and is close to the ocean, meaning cleaner air. Petalburg is based on Fukuoka, the most popular city on Kyushu, surrounding Hakata Bay, and joins the Genkai Sea. The balance between the land and the water appears intentional in Petalburg.

Our next stop is Rustboro City, an industrial hub based on Kitakyushu, best known for its steelmaking. Rustboro is home to the Devon Corporation, which is based on Zenrin, a technology company that designs navigational software. This is reference through the PokéNav. Rustboro has a close connection to the land; their buildings are made with stone, the Devon Corporation revive fossilised Pokémon, and there is mention of an incomplete tunnel, as construction was disturbing the subterranean Pokémon.

The trendy Dewford Town is an island location based on Tsushima Island. Once a singular island, Tsushima was split into three by a pair of canals in 1671 and 1900. Though Dewford remains a lone island, the ever present themes of land and sea are shown throughout, and maintains the sense of harmony.

On the way to Slateport City, the player passes by the Sea Mauville, an abandoned research facility built to extract resources from the ocean. Though closed for several reasons, it became a nature reserve for Pokémon. Sea Mauville is based on Hashima Island, an abandoned island that was rapidly constructed, once used to mine for coal. Hashima resembles a Japanese battleship, explaining why it was originally represented by an abandoned ship in Ruby & Sapphire.

Slateport is a historic, thriving port town with a large shipyard and has a close bond with the ocean. It is one of the few locations in Hoenn that references the past through its oceanic museum. The large, bustling market and retrospective of the past references Nagasaki, which has a history as an international trading port. Nagasaki is best known for being struck with the second and last atomic bomb, bringing World War II to an end.

An unusual location in Hoenn are a pair of interwoven cycle paths that reference the relationship between nature, mankind, and Pokémon, and the land and the sea. One path is low and covered in grass, whilst the second is artificial and built over the sea. It is mentioned in dialogue that the grassy path was left alone for the sake of the Pokémon.

Mauville City is a central hub for travellers in Hoenn. The founder and Gym Leader, Wattson, expanded the town to become more urbanised, resembling Lumiose City from Kalos, introduced in Pokémon X & Y. Hoenn looks to the possibilities of the future, with Mauville being a positive example of this, becoming a mostly indoor city without bulldozing the environment. Mauville doesn’t have much in common with its inspiration, Kumamoto, although the interiorised city may reference the many smaller towns integrated into Kumamoto.

Verdanturf Town is one of the cleanest, healthiest places in Hoenn, explaining why Wally later moves here. The local wind conditions allow the town to avoid being covered in ash from Mount Chimney. Verdanturf’s inspiration, Kikuchi, has a similar history, thanks to the rich soil and fresh water drawn from the surroundings mountains.

Hoenn introduced Pokémon’s first desert area, home to some ruins, which are based on Minamiaso, a village which is located within the Aso Caldera. The great Mount Chimney is based on Mount Aso, Japan’s largest active volcano. Lavaridge Town features natural hot springs, referencing both Beppu and Aito, famous onsen towns. Other nearby locations include the Meteor Falls, based on the Udo Falls, and Fallarbor Town, which stands in for Ōita. Fallarbor is depicted as a small farming town that is constantly covered in ash from Mount Chimney, but is adaptable, and the surrounding area is a hot spot for meteorites.

The western half of Hoenn is very dry and humid, whilst the eastern half introduces rain conditions, has a much more wetter, forested landscape. We come to Fortree City, where the residents live in treehouses. This location directly ties into the harmonic relationship Hoenn has with nature. It is an amalgamation of Kobayashi’s many sites of interest, including the Ikoma Plateau, the many hill castles in the area, and the Suki Suspension Bridge.

The Scorched Slab is home to the legendary Heatran, a fourth generation Pokémon. The fact this fire-based Pokémon is a nod to Amano-Iwato, where the sun goddess Amaterasu hid after falling out with her brother Susanoo. Mount Pyre is based on Sakurajima, the most active volcano in Japan, though Pyre is depicted as a mountain dedicated to the deceased similar to Lavender Town.

Lilycove City carries the slogan, “Where the land ends and the sea begins”. It is the last city on the mainland, tying into our ongoing themes. The name itself is a nice nod, a lily being a plant that is associated with both earth and water. It is based on Kanoya, a beautiful city in Kagoshima. Lilycove features several Pokémon trainer clubs, which may reference the Kanoya Institute of Fitness and Sports.

Mossdeep City is an island settlement based on Tanegashima Island, a subtropical locale, best known for its space station, and where European firearms were introduced to Japan. Mossdeep’s space station is based on the Tanegashima Space Centre. It is run by JAXA, the Japan Aerospace Exploration Agency. Mossdeep is a natural beauty, and has a perfect relationship between nature and technology. The locals pray to a large rock outside the space centre for the rockets to have successful launches.

Sootopolis is one of the most unique of Pokémon locations. It is built within a chalk white island that is actually a meteor crater, which filled with rainwater, forming the unique landscape. Sootopolis is geographically based on Yakushima Island, but the design is based on Santorini, Greece, which is a part of the remains of a volcanic caldera. The slumbering Groudon and/or Kyogre can be found beneath the city in a secret cave.

Pacifidlog Town is made out of driftwood and built in the middle of the ocean. It is said that the town is built on a reef of Corsola. This is a reference to the Yaeyama Islands, which are home to many coral reefs. Mirage Island is a rare sight in Hoenn, home to the Wynaut. It is based on the equally elusive Yaebishi, a coral reef in Okinawa which only appears once a year. The Southern Island, where the mythical dragon twins Latias and Latios dwell, is based on the Danjo Islands.

Finally, we have Ever Grande City, the home of the Hoenn Pokémon League, based on Okinawa. In Omega Red & Alpha Sapphire, the Pokémon League building bares a resemblance to the historic Shuri Castle.

In our next article, we shall continue our tour into the realm of Pokémon Diamond, Pearl, and Platinum, exploring the Sinnoh region. Feel free to leave a comment on our Twitter feed!