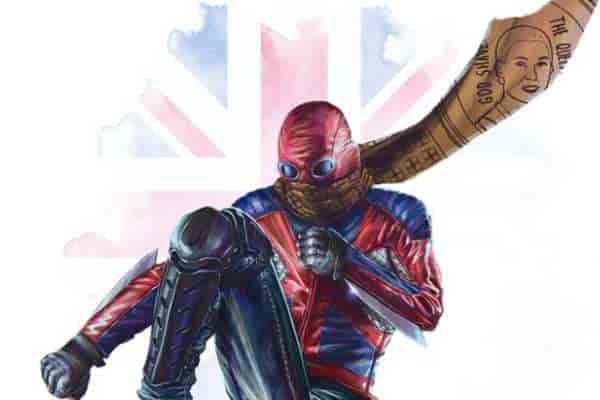 With Buzzard!’s first three issues currently crowdfunding on Kickstarter, we’re taking a look at #3 of the darkly superhero adventure.

If you haven’t checked it out yet, Buzzard! reinvents the archetype of the brazen, violent superhero-assassin hyphenate. This type of character—think Deadpool—has become a staple of the superhero genre for a couple of decades now. While lack of restraint defines this sort of character, sometimes even they can cross the line. This might be because of the writers’ own lack of writing inhibitions. The most effective and popular of these characters—again, like Deadpool—are those who show a bit of self awareness amidst all the ridiculous hyperviolence. That is to say, I think Buzzard! and its hero Erik show a lot of promise.

Whereas Deadpool has his trademark 4th-wall breaks, Erik does something quite similar with his narration throughout the issue. Buzzard! also undercuts the ridiculousness of its flamboyant violence with Erik’s crass British sarcasm. There’s already a novelty to setting a superhero story in Britain – that in itself is a pretty scarce occurrence. But it’s all the more unusual to read Buzzard! with its foul-mouthed and decadent presentation of London. Erik’s curses, his taunts, his swagger; all of these are pulled from the streets of London, a divide from your typical grounded indie comic. It all feels so unusual coming out the mouth of an antihero clad in tights. This is especially clear in Buzzard! #3 when Erik goes on holiday and gets into all sorts of trouble.

Some readers might find Erik’s smarminess a little insufferable. But writer and series creator Andrea Wolf appears to have his priorities right with Erik’s characterisation. Erik by himself can indeed be a bit intense; he sometimes crosses the line into creepiness or insanity. Therefore, Wolf spends as much time in each instalment on Erik’s supporting cast: Erik’s mentor Kal, and his sister Mattie. Buzzard! #3 opens with Erik and Mattie at the beach together. We see them joke around, as brother and sister would. Passages like this are a relief from the wise-cracking super-assassin mayhem. They give Erik more room to breathe as a character underneath all the mouth. More than anything, it’s these relationships at the forefront of the story in Buzzard! that suggests the series has real longevity.

Ezequiel Assiss’ art bolsters the characterisation; the perfect expressions and minute reactions are the punchline to every joke. His work on Erik especially makes all the difference; he expertly toes the line of the hero being a loveable rogue, and not an intolerable jerk. This same attention to alacrity and timing shows in Assiss’ action sequences. The frequent and brutal violence never lingers on for too long. The violence is built into the action without halting the flow of the page; it often smoothly compliments the direction of the panels. As a result, brutal moments of violence in the action sequences stay very much in line with the comic’s tone.

Buzzard! continues to be a subversive superhero adventure. It shows awareness of the genre beforehand, with a sense of humour, and a real intent to do something new.

Have you checked out Buzzard! yet? If not and you’re interested, be sure to support the ongoing Kickstarter. When you’re done, let us know what you think and sound off in the comments or send us a line on Facebook or Twitter!