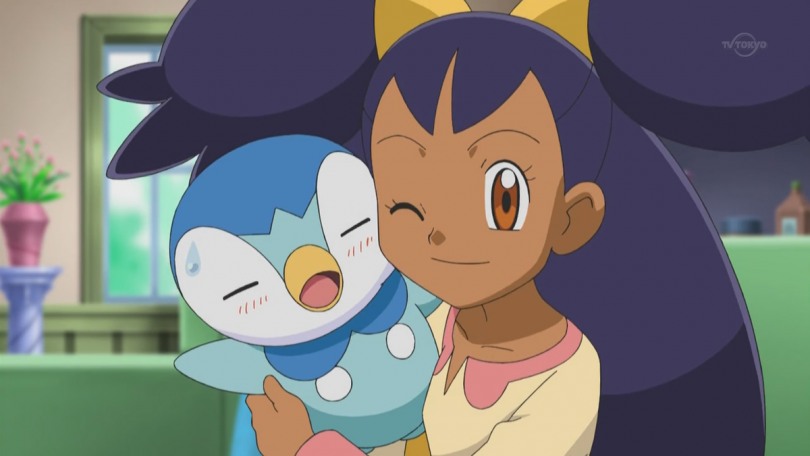 The first four generations of Pokémon had settings based on Japanese prefectures. For the fifth, Game Freak chose to do something different. Pokémon Black & White are set in the Unova region, based on New York City and the surrounding area. These games may have featured the most ambitious narratives in Pokémon to date. In this article, we will be exploring the geographical, historical, and cultural inspiration behind Unova. The information in this article is drawn primarily from Bulbapedia.

This isn’t the first region based on an American location. The Orre region from Pokémon Colosseum was based on Phoenix, Arizona, which we will cover another time. Unova’s Japanese name is Isshu, which can mean “one variety”. Although Unova is diverse in its people and Pokémon, it is unified by their relationships with one another. The English name shares the trend, likely coming from the Latin word “unum” which means “one”. It could also be an abbreviation of the United States of America. 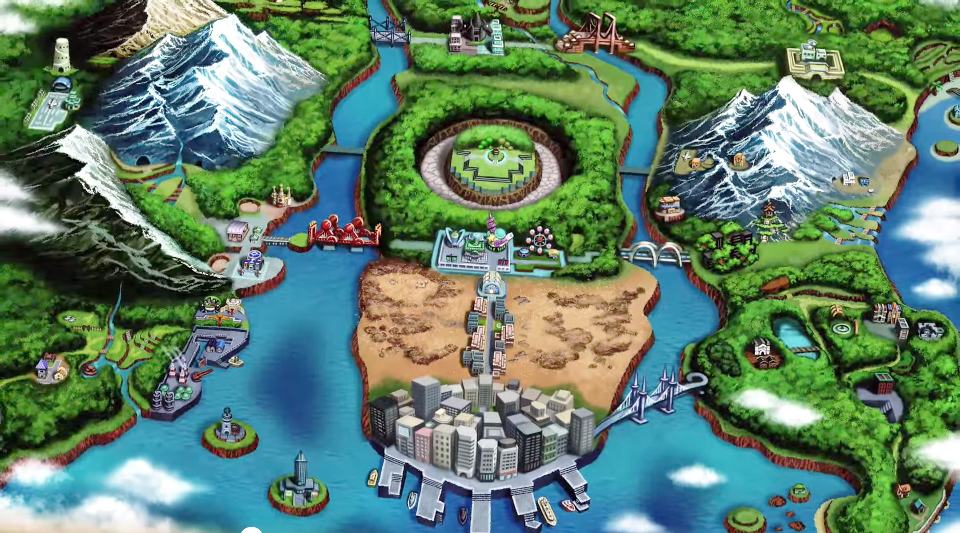 In keeping with the region’s mythology, equal balance is revered in Unova. Unova was founded by two brothers who valued truth and ideals. The games’ legendaries are the twin dragons Reshiram and Zekrom. Together, they are inspired by the duality of Taoism yin and yang. In the present day, Team Plasma, led by the mysterious N, wish to “liberate” all Pokémon from their bonds with humans, believing this will achieve true equality. However, the team’s true leader Ghetsis, wants to rule the region as  sole the sole master of Pokémon. They raise questions of morality when it comes to the whole “gotta catch ‘em all” way of life in the Pokémon world. N’s heart is in the right place, but his methods of achieving his goal are wrong.

Unova is a celebration of American diversity and culture. Pokémon Black & White were the first games to introduce black characters into the series, such as Iris, Lenora, and Alder. Many of the new Pokémon are nods to American and New York stereotypes. For example, you have street punks (Scraggy/Scrafty), construction workers (Conkeldurr), New York pigeons (Pidove), and even references to the MTA (Watchog). Braviary and Bouffalant are based on the bald eagle and buffalo, both recognised symbols of America.

Like the other regions, Unova is more rural than the urban New York. Our first stop is Nuvema Town, home of our playable characters Hilbert or Hilda. Professor Juniper’s laboratory is located here, where the player can choose their starter Pokémon: Snivy, Tepig, or Oshawott. Geographically, Nuvema is based on Howard Beach, a Coney Island neighbourhood. Coney Island itself appears to have been fused with Nimbasa City, where you can enjoy an awkward ferris wheel ride with N.

Accumula Town is based on either Brooklyn neighbourhoods Flatlands or Marine Park, as seen in the area’s townhouses. Striaton City is split between an urban business district and a large public garden. It is based on Canarsie, with its garden based on the community park founded in 1895. The city’s major restaurant is likely inspired by New York’s popular eateries like Katz’s Delicatessen.

Nacrene City has a unique landscape, made up of century-old warehouses, converted into homes and businesses. It is a popular location for hipsters and artists, described as a “city of art”. Nacrene is based on DUMBO (Down Under the Manhattan Bridge Overpass), known for its thriving art community, and has a high concentration of tech firms. Even DUMBO’s disused train tracks are included. Pinwheel Forest is based on Cadman Plaza, a park close to the Brooklyn Bridge. The bridge itself inspired Skyarrow Bridge, further based on the Rainbow Bridge in Tokyo.

The most recognisable location in Unova is Castelia City, an obvious reference to Lower Manhattan and its iconic skyscrapers. Like Manhattan, Castelia is a major business district and a hive of international cultures. The Battle Company likely references Wall Street, whilst the city gym is based on the Metropolitan Museum of Art. Amusingly, Game Freak has a building in Castelia, possibly referencing Manhattan’s Nintendo store. The city’s Central Plaza is a fusion of both Rockefeller Plaza and Central Park (which is further referenced elsewhere).

The city docks will take the player to Liberty Gardens, based on Liberty Island, and the Unity Tower, a fusion of the UN Headquarters and the Empire State Building. Castelia’s ability to draw many people may reference the mass immigrations that occurred to America in the early 20th century.

There has been speculation that Unova’s Route 4, a desert route in a reconstruction period, may reference the World Trade Centre. The route is home to the Relic Castle, which fell under controversy itself. It was meant to be featured in climatic anime episodes, which went unaired due to the 2011 Tōhoku earthquake and tsunami.

Our journey continues through Join Avenue, based on the Manhattan Mall, and into Nimbasa City. It is based on Midtown Manhattan, complete with locations referencing Madison Square Garden (Big Stadium), Broadway (Pokémon Musical), Coney Island (Rondez-View Ferris Wheel), and Grand Central Terminal (Gear Station). The Gear Station is the centrepoint of the Battle Subway, an obvious nod to the New York Subway.

The positioning of the Driftveil Drawbridge is a nod to the Lincoln Tunnel, which runs under the Hudson River, connecting New Jersey to Manhattan. Driftveil City stands in for Union City, New Jersey, home to the first food truck.

Mistralton City is dominated by an airport, referencing Teterboro, which also has a major airport. Icirrus City features classical European architecture and windmills. Its counterpart, Ridgefield, was founded by Dutch settlers. The Moor of Icirrus is based on Bear Swamp, one of the oldest American forests. Opelucid City’s identity differs in Black & White, either a city of technological progress, or one that honours the past. This shifting identity references Washington Heights, which has gone through many cultural changes.

The Village Bridge stands in for the Robert F. Kennedy Bridge, but draws inspiration from the Ponte Vecchio, an Italian bridge destroyed by a flood in the Middle Ages. Our journey takes us through Lacunosa City, based on Flushing, Queens. In the games, the city residents habitually stay indoors at night, out of fear of the legendary Kyurem. Kyurem personifies the concept of wuji, the absence of yin and yang, lacking balance. The cityfolk may hide to avoid losing their own sense of equality.

Undella Town geographically matches Jamaica, Queens, but its description as a summer resort references the Hamptons. The Entralink is a central, woodland location in Unova, suitably matching Central Park, though draws inspiration from the Tokyo Imperial Palace.

Pokémon Black & White gained sequels, which introduced more locations. Aspertia City is the home of the sequels’ player characters Nate and Rosa. It is based on Elizabeth, New Jersey, which was named of America’s most greenest cities (the only one to be included from the “Garden State”). Floccesy Town is based on Newark, specifically Branch Brook Park, the oldest county park in the United States. The industrious Virbank City is based on Jersey City, the Virbank Complex resembling the oil refineries located along the New Jersey Turnpike.

Humilau City consists of a small island and many boardwalks. Though not a direct reference, it is based on Long Island villages, such as Jones Beach and Fire Island. Similarly, Lentimas Town has little in common with Williamsburg, featuring buildings with a Pueblo Revival style. This may reference Williamsburg’s sizable Puerto Rican community. Anville Town is dominated by a large railway roundtable, referencing how Port Jervis has a similar city structure.

The Black City and the White Forest exist in the same location, but appear exclusively in separate games, the former in Pokémon Black and the latter in Pokémon White. Both represent Long Island City. Both of their environments appear to be influenced by the speed that the player takes to reach them. The Black Tower, within Black City, resembles the Skyline Tower.

Finally, the Pokémon League bares a resemblance to the New York Botanical Gardens. The 250-acre gardens were established in 1891, home to the Enid A. Haupt Conservatory, the visual inspiration behind the League’s grand façade.

On our next trip, we shall be travelling to the Kalos region from Pokémon X and Y. What are your favourite Pokémon of the fifth generation? Leave a comment below, or on our Twitter feed!